The City of Greater Geelong is the most populous municipality in regional Victoria, around 80 kilometres south west of Melbourne. The history of residential development in Geelong dates back to the 1830s, the area was first surveyed in 1838, three weeks after Melbourne and at this point the settlement had a population of 500. The first woolstore was erected in this period and Geelong began to assume a role as the port for the burgeoning wool industry of Victoria’s Western District. The gold rushes in Ballarat in the 1850s also had a significant impact on Geelong’s development as a port and the population increased from 8,000 to 22,000.

The early 20th Century saw Geelong emerge as a major industrial and manufacturing centre with the establishment of automotive manufacturing, distilling, woollen mills and a cement and fertiliser works. This growth continued into the post war era, with significant residential development occurring in northern suburbs such as Bell Park, Bell Post Hill, Norlane and Corio as well to the south in suburbs such as Belmont, Highton and Newcomb. The City has also experienced significant growth in the major outlying commuter centres of Lara and Leopold as well as in the resort areas of the Bellarine Peninsula. Much of this recent growth has been focussed in Ocean Grove and Clifton Springs. The main rural areas of the City are located in the far north and the Bellarine Peninsula, although many of these parts have a large component of rural residential and rural living.

The City of Greater Geelong had a relatively stable population for much of the 1980s and early 1990s, but has grown strongly in population over the last five to ten years on the back of employment growth in service industries, as well as increased demand in coastal resort areas.

Population growth has been most heavily concentrated in both suburban Geelong (Highton, St Albans Park), as well as Lara and Leopold and on the Bellarine Peninsula (Clifton Springs, Ocean Grove). The local employment growth in services has been boosted by external population growth pressures. They include the traditional flow of population from the surrounding rural areas and smaller towns, which is a result of children finishing their secondary schooling and people leaving farming areas as a result of efficiencies in the agricultural industries. The second source is more distant, which includes persons from overseas and the outward flow of population from Melbourne, particularly to the resort areas. Some areas also gain from Geelong as a result of departures, such as Golden Plains Shire. This is generally made up of younger family households.

It is assumed that a number of these patterns will continue into the future, most notably flows into the City from surrounding areas. The number of persons coming to Geelong from overseas and metropolitan Melbourne could be expected to increase as employment growth and tertiary education opportunities are further enhanced. The migration flows within Geelong are expected to reflect where the supply of residential land is located (destination) and where young people have grown up and left home (source).

With the progressive residential development of the City over a century and a half, the large size of the municipality, the availability of land for development and the broad range of land uses, areas have developed different roles within the housing market. Geelong, Geelong West and to a lesser extent Waurn Ponds, attract a large number of persons in their late teens and early twenties, which is a reflection on the large amount of affordable rental accommodation and being close to significant retail services or tertiary education. Some areas, such as Waurn Ponds and Wandana Heights, are also attractive to mature families looking to upgrade to their second and third home. Areas such as St Albans Park, Lara and Leopold have had significant residential development in more recent years and are attractive to couples and families seeking new housing opportunities. The more rural parts of the City are also attractive to families seeking a rural environment and a new lifestyle. These areas include Rural Bellarine Peninsula and Rural North. The coastal resort areas attract both family households as well as retirees. Portarlington and St Leonards in particular attract large numbers of retirees and older adults. This variety of function and role of the small areas in the City of Greater Geelong means that population outcomes differ significantly across the municipality. 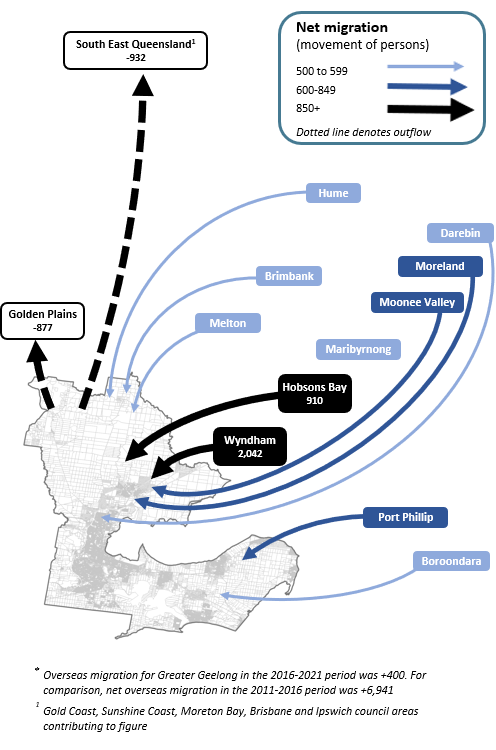 There are also significant differences in the supply of residential property within the City which will also have a major influence in structuring different population and household futures over the next five to twenty years. Large new ’greenfield’ opportunities have been identified in the growth areas, notably the Armstrong Creek growth area, which is currently developing strongly, as well as significant short to medium term supplies in Ocean Grove, Leopold, Curlewis, Highton, and Marshall. Further greenfield opportunities have also been identified over the nedium to longer-term, most notably the Western Growth Area, with development expected to commence from about 2025 in Bell Post Hill and Lovely Banks - Batesford - Moorabool. There are likely to be other greenfield, rural residential and most notably infill development opportunities throughout the City, albeit at lower levels than the major growth areas identified above.

Powered by .id (informed decisions) for City of Greater Geelong