Frankston City has experienced significant population growth in the post war era, with areas such as Karingal, Frankston Heights and Frankston North developing in the 1960s and 1970s and Carrum Downs and Langwarrin developing in the 1980s through to the present. The primary housing market role that the City has played over this period was to provide affordable home owning opportunities for families and prospective families from the outer southern suburbs of Melbourne. After a number of decades of strong growth, the City is reaching the end of its development phase, with limited development opportunities available in the recent growth areas of Carrum Downs and Langwarrin. The Frankston Central area, which includes the Frankston Metropolitan Activity Centre, functions as the major regional retail and commercial centre for outer southern Melbourne and the Mornington Peninsula, is set to increase its level of residential development. This will primarily take the form of medium density housing capitalising of the area’s strategic location.

The Carrum Downs and Langwarrin areas have traditionally provided housing opportunities for new households being created in the older areas of the City, in addition to attracting households from outer southern and south-eastern suburbs. This pattern is expected to continue as children leave home to form households of their own. By the end of the forecast period, it is expected that there will be a greater outflow of households from the City as development opportunities in the growth areas are depleted.
Historical migration flows, Frankston City, 2011-2016 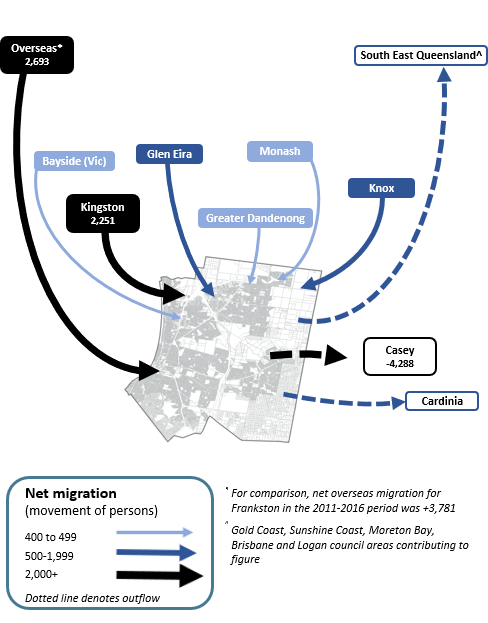 With the progressive residential development of the City over many decades, areas have developed different roles within the housing market. Areas such as Carrum Downs, Skye, Sandhurst and Langwarrin have had significant residential development in more recent years and are attractive to couples and families seeking new housing opportunities. Areas such as Frankston South are attractive to mature families looking to upgrade to their second and third home in an appealing suburban environment. Frankston Central, which contains the Frankston Metropolitan Activity Centre, plays a role as the most ’urban’ area of the City, attracting younger adults seeking access to employment, education and transport. As this area attracts more intense forms of residential development, its role is likely to be reinforced, with older ’empty nester’ households also likely to be attracted. This variety of function and role of the small areas in Frankston City means that population outcomes differ significantly across the municipality.

There are also significant differences in the supply of residential property within the City which will also have a major influence in structuring different population and household futures over the next five to twenty years. ’Greenfield’ opportunities are focused in Carrum Downs, Skye, Sandhurst and Langwarrin. Frankston Central is expected to experience significant major site development, while Seaford is expected to experience relatively high levels of infill development based on its size and location.