Shoalhaven City is located on the south coast of New South Wales, with the regional centre of Nowra-Bomaderry located about 160 kilometres south of Sydney. Most of the population is concentrated along the coastal fringe. which is traversed by the Princes Highway. The major centres are Nowra-Bomaderry, Milton-Ulladulla, Huskisson-Vincentia, St Georges Basin District, Culburra Beach and Sussex Inlet. The City encompasses a total land area of about 4,660 square kilometres, including substantial areas of national park, state forest, bushland, beaches and lakes. The natural amenity of the City is a strong attractor, for both new residents, holiday makers and day trippers.

The original inhabitants of the Shoalhaven area are the Wodi Wodi, Wandandian and Murramarang Aboriginal people. European settlement dates from 1822 when land was taken up near the mouth of the Shoalhaven River. By the 1850s townships were established in Berry, Bomaderry, Kangaroo Valley, Milton, Nowra and Ulladulla, acting as service centres for the surrounding farming districts. Some growth took place in the late 1800s. Significant development occurred during the post-war years, particularly in the coastal areas. Rapid growth took place in the 1970s and 1980s, as increasing numbers of people sought housing for retirement and holidays. The population grew from about 29,000 in 1971 to nearly 58,000 in 1981. The population continued to increase during the 1990s, rising from about 70,100 in 1991 to 86,900 in 2001. By 2006 the population reached 90,000, and grew further to 101,942 in 2016. In recent years most growth has occurred in the Nowra-Bomaderry area, as well as the Jervis Bay towns, and further south around Ulladulla, Milton and Mollymook.

The City has traditionally sourced most new residents from Sydney and the Illawarra Region. The City attracts two distinct housing markets - families with children under 10 years, and retirees, but this differs widely across the City. However, like many regional areas of Australia, the City loses young adults to Sydney and Wollongong, primarily for employment and education purposes. The impact of strong and improving transport links to Sydney and the Illawarra are greater accessibility both for Shoalhaven residents accessing larger employment markets, but also for prospective new residents to the City, both permanent and part-time.
Historical migration flows, Shoalhaven City Council, 2011-2016 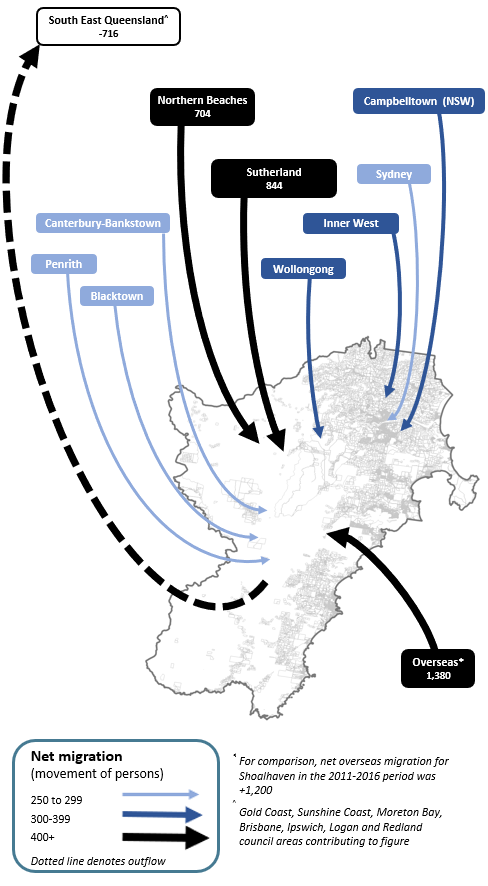 Due to the long history of development, coupled with the dispersed settlement pattern and economic function across the City, different housing markets have evolved over time. The regional town of Nowra-Bomaderry tends to attract a greater share of families, but also some elderly persons seeking better access to health services and/or more suitable residential accommodation. Coastal and Jervis Bay towns attract a greater share of retirees and lifestylers (including some families), due to the high amenity of these areas. Many towns are popular holiday destinations and as such a large proportion of their housing stock are holiday and/or second homes.

There are also significant differences in the supply of residential property within the LGA which will also have a major influence in structuring different population and household futures within Shoalhaven City over the forecast period. Significant new greenfield supply has been identified in West Nowra-South Nowra-Nowra Hill & Surrounds and Bangalee-Cambewarra Village-Tapitallee & Surrounds, which, as developed, will see an outward expansion of the Nowra-Bomaderry urban area. Further south, there is significant development assumed in the Ulladulla Region, particularly in Milton-Mollymook-Narrawallee & Surrounds. In contrast, some areas will see minimal future development due to environmental and other constraints, for example Shoalhaven Heads and Greenwell Point-Terrara & Surrounds. Overall, population and household growth is forecast to be modest to strong over the forecast period, with population reaching approximately 137,000 people by 2051.