Campbelltown City is a residential, commercial and industrial LGA located in south western Sydney between 30 and 50 kilometres south west of the Sydney GPO. The City features a large residential population as well as significant employment areas based around Ingleburn, Minto and Campbelltown.

While development in central Campbelltown dates from the 1830s, the most significant period of growth in Campbelltown City was in the post war era. Up until the 1960s, Campbelltown LGA was predominantly a rural area with settlements located at Campbelltown, Minto, Ingleburn and Glenfield. This changed rapidly from the late 1960s as significant residential and employment growth took place, including State Government housing projects in Airds, Macquarie Fields, Minto and Claymore. The primary housing market role that the City has played in the post war era has been to provide relatively affordable housing for young families, originating in the south western suburbs.

This role continues, and although many new households are now moving to new housing opportunities in Camden LGA, as that LGA starts to exhaust itself, Cambelltown will start to retain relatively more growth. Development opportunities in Campbelltown are expected to continue, with the continued development of Edmonton Park (in Ingleburn) and, in future, the East Leppington Release Area and the Urban release areas to the south of the LGA 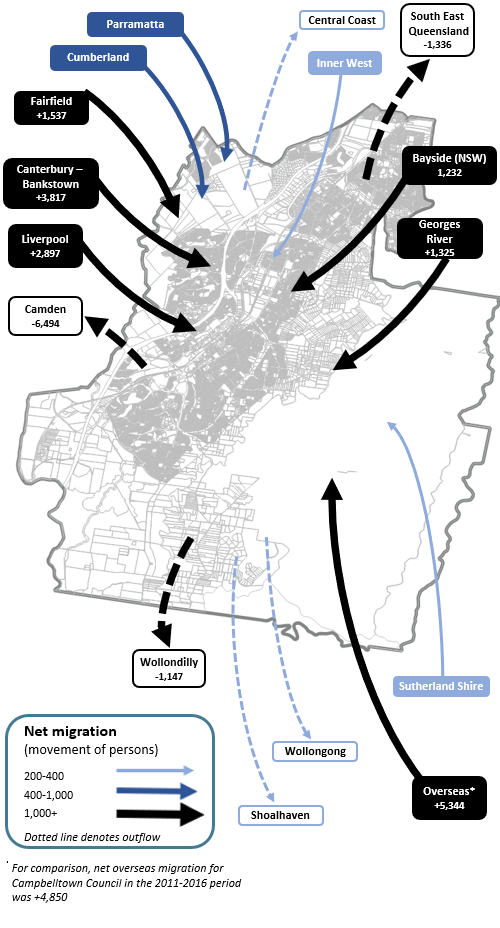 Campbelltown City comprises a variety of residential roles and functions. The majority of suburbs are expected to have relatively little change in population owing to lack of opportunity for new housing development. There are currently several housing redevelopment schemes in Minto, Airds, Bradbury, Rosemeadows, Macquarie Fields, Claymore and Ambervale, which are intended to redevelop the public housing estates to produce a more varied housing stock, much of which is for private sale to promote a greater mix of tenures. As a result of these schemes, there has been (or will be) a short-term stimulation to the housing market within these areas, promoting some population gain through migration; however, in the medium to longer term, it is likely that these areas will not have much further capacity for residential development, leading to stable or declining populations over the later periods of the forecast. Central Campbelltown plays a unique role within the City, providing a focus for employment and education. This area attracts a younger population and has a higher proportion of private rental dwellings and higher density forms of housing, similar to inner urban areas. Some older suburbs, such as Glenfield and Ingleburn are expected to experience significant levels of new development , attracting family age groups. The variety of function and role of the small areas in Campbelltown City means that population outcomes differ significantly across the LGA.

There are also significant differences in the supply of residential property within the LGA which will also have a major influence in structuring different population and household futures within the City over the next five to ten years. New development opportunities have been identified in Menangle Park, Ingleburn, Glenfield and central Campbelltown, as well as new development around Gilead, in the south of the LGA. In contrast, many established areas have low amounts of new dwellings expected over the forecast period, in some cases resulting in overall population decline.