Mornington Peninsula Shire is a diverse municipality in terms of its land use and economic base with a mixture of urban areas, resort towns, tourist developments, rural land and parkland. The earliest settlements in the Shire serviced the surrounding rural districts, but proximity to Melbourne and the coastal environment quickly made tourism and retirees key drivers in local residential development. This has led to the creation of a contiguous urban area along most of the Port Phillip coast. The expansion of the Melbourne metropolitan area into the northern areas of the Shire has given areas such as Mount Eliza and Somerville characteristics of suburban areas, with most people working in other areas to the north, such as Frankston and Dandenong. Significant industrial expansion after the Second World War in the east of the Shire (around Hastings and Crib Point) was a further impetus to residential development, while improved road transport access (notably the Mornington Peninsula Freeway) improved residents’ access to work in areas to the north and stimulated growth across the municipality including in rural areas, such as Red Hill.

These influences have continued to shape the population of Mornington Peninsula Shire. The importance of the Shire in providing new residential opportunities for suburban expansion in the southern suburbs of Melbourne (especially ex-Frankston and Kingston residents) and as a retirement destination for Melbournians has continued. The flow of empty-nesters and retirees should also continue from the eastern and south-eastern suburbs, especially as the population of Melbourne ages. The attraction of the inner suburbs of Melbourne for tertiary education, employment opportunities and the ’bright lights’ should ensure the out-migration of some young adults in their late teens and twenties. Recent development in Mornington and Mount Martha has also attracted families and young couples from the South of the Mornington Peninsula, offering more affordable family type housing closer to services and employment than is found in the South. 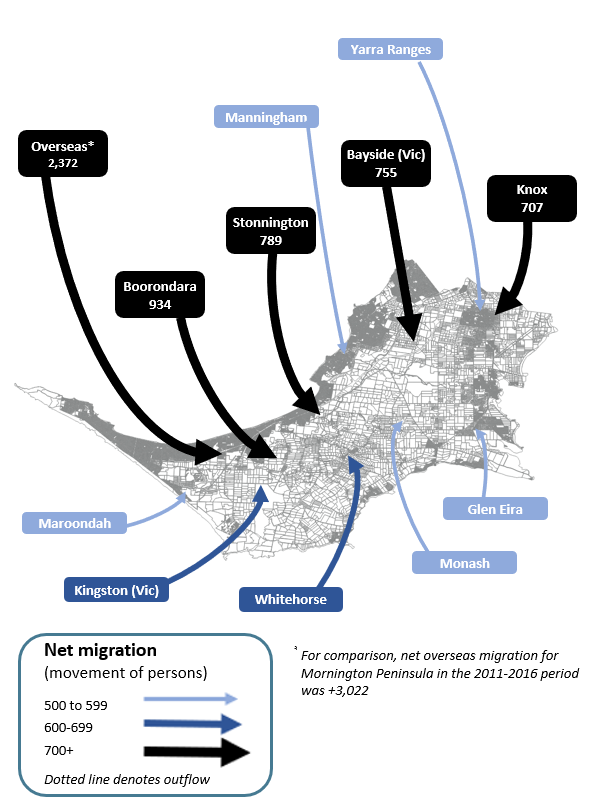 With the varied development phases, the overall size of the municipality and the differing local economies, areas within Mornington Peninsula have developed different roles within the housing market. Areas such as Mount Eliza and Red Hill are attractive to mature families looking to upgrade to their second and third home and, in the case of the latter area, to a rural environment. Mornington and Mount Martha, owing to the recent development of new family type housing, are areas that tend to appeal to young and mature families. Hastings and Crib Point provide more affordable housing options. Areas in the south of the Shire are more focused as locations for retirement, with many areas notably Sorrento, Rosebud and Rye having a significant share of their stock as holiday homes. This variety of function and role of the small areas in Mornington Peninsula means that population outcomes differ significantly across the Shire.

There are also significant differences in the supply of residential property within the Shire which will also have a major influence in structuring different population and household futures within Mornington Peninsula over the next five to fifteen years. Much of the ’greenfield’ opportunities within Mornington and Mount Martha have now been developed and, with the exception of Martha Cove, there are few significant major sites within the Shire.

Most of the land zoned for residential use under the current planning scheme is developed and the land abutting these areas is generally designated as rural or green-wedge. Any areas that are relatively underdeveloped, are generally zoned for lower density residential, which significantly constrains the number of dwellings that can be built. Consequently, most future opportunities lie in the redevelopment of suitable lots for the construction of units and medium density housing - socalled ’infill’ development. This was a significant source of additional dwellings between 2006-2011 within established urban areas of the Shire such as Hastings, Mornington, Dromana and Rosebud; however, infill development is regulated in many areas through the application of design and development overlays which limit subdivision within residential areas to preserve current densities. This is particularly so within Bittern-Crib Point which, over the 2006-2011 period, had significant dwelling gain through the subdivision of large lots into cul-de-sacs of 6-12 dwellings. This type of development was considered to produce undesirable outcomes for the area and the Council imposed a Design and Development overlay to curtail similar future development. Consequently, future growth is likely to be limited to existing urban areas, particularly within commercial centres where higher density housing forms and mixed-use developments (with apartments over the top of commercial premises) are desirable. Owing to the type of housing market and the planning regimen, most future development within Centres is likely to be confined to units and low-rise apartment buildings of no greater than 4 storeys. The centre of Mornington is the most likely area to gain significant numbers of new dwellings through this type of development, not least because it enjoys relatively good access to employment centres outside the Shire owing to the improvement in accessibility produced by the opening of Peninsula Link. Areas such as Rosebud, West Rosebud, Dromana and Rye have significant capacity, but face greater market constraints. They are unlikely to attract higher density development, with apartment type buildings being confined to the seafront and catering predominantly for tourists. Most infill development is likely to follow the established pattern of medium density units and dual occupation. Hastings, whilst also a significant centre, has limited land supply, with the majority of the area already developed.

The southern areas of Mornington Peninsula Shire can expect a significant number of new households as a result of the conversion of holiday homes to permanent settlement. This pattern is likely to be uneven, with areas along the Port Phillip coast (especially areas such as Dromana, Rosebudand Rye) more affected by this trend than those along the southern coastal strip (Somers, Point Leo, Flinders etc.).