Hornsby Shire is located on the northern edge of metropolitan Sydney, with the main centre at Hornsby about 25 kilometres north of the CBD. The northern areas of the Shire are dominated by National Park and rural land uses, while urban development is focused at the southern end and along the Newcastle Railway / Freeway corridor.

The topography of the area has had a major bearing on its development, with accessibility and connectivity within the Shire constrained by ridges, ravines and creeks. This has led to residential development following corridors and valleys where access is more feasible. The main areas of development are in the south, especially along the Pennant Hills Road corridor, the west, along the New Line Road corridor and north, out of Hornsby along the Pacific Highway corridor.

Much of the residential development in the Shire occurred in the post-war period, with the bulk of the greenfield expansion occurring in the decades leading up to the 1980s. In the last 20 years, the Shire has continued to provide new housing in areas such as Cherrybrook, Castle Hill and Dural. In addition, some areas have increased in density, most notably around Hornsby and Waitara. The past few years have seen greater densities built around and identified for a range of other centres such as Asquith, Mount Colah, Thornleigh and Pennant Hills. Most of these identified opportunities for medium and high density development are likely to be utilised in the coming 10-15 years, after which time Hornsby Town Centre is expected to be the focus for residential development.

In general terms, the Shire tends to gain people in net terms from the south and south-west and loses to people to the north and north-west. This outward, sectoral movement is typical for much of Sydney. The impact of overseas migration is also important, with the largest net gain from this source. The traditional role and function of Hornsby Shire is to provide home owning opportunities for families and prospective families from northern and north western Sydney. The Shire has also developed an important role as a location for seniors living and residential aged care. By contrast, the Shire tends to lose young adults in net terms, especially 18-24 year olds, as they seek affordable housing and tertiary education and employment opportunities. The main areas that young adults from Hornsby go to are the inner city LGAs of Sydney, Inner West and North Sydney, as well as The Hills Shire and the ACT. The Shire also tends to lose a large number of empty-nesters and retirees, especially to areas in the north, especially the Central Coast, the Lower Hunter and the Mid-North Coast. The opportunity to have a change in lifestyle and make a large capital gain has been a major reason for this trend. 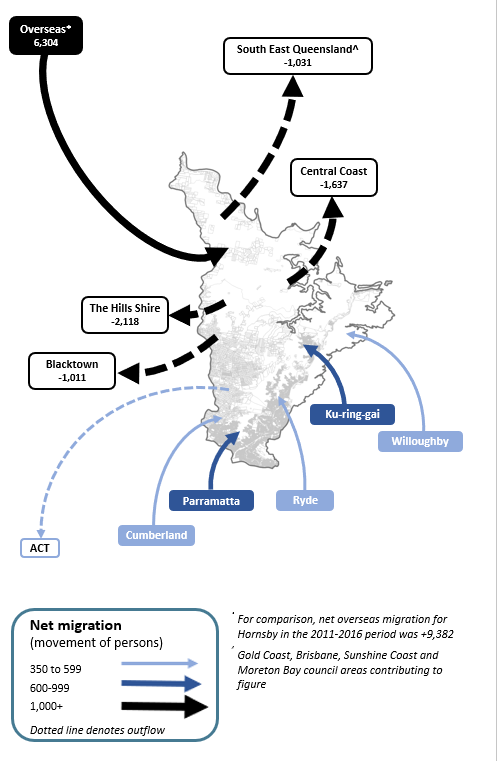 Although the dwelling stock of Hornsby Shire is dominated by larger, separate houses, which attracts lots of families to the Shire, different areas within Hornsby Shire have developed different roles within the housing market. The suburbs of Hornsby and Waitara tend to gain young adults and some young families through migration, which is reflective of the smaller and more affordable dwelling stock and their good transport connectivity. The forecasts assume similar profiles in Asquith and Hornsby Town Centre in the future, with a greater share of higher and medium density development. Most other areas follow the general Hornsby Shire pattern of attracting families and losing empty-nester and retiree ages (50-69), but a number of areas also play a prominent role in seniors living and aged care. These areas include Arcadia-North Western Rural, Beecroft-Cheltenham, Brooklyn, Castle Hill, Cherrybrook, Dural, Normanhurst, Wahroonga and Westleigh.

There is a strong demand to live in most parts of Hornsby Shire, but there are significant differences in the supply of residential potential within the area which will have a major influence in structuring different population and household futures over the next five to twenty-five years. In the short-term, the largest share of residential development is expected in the small areas of Asquith, Waitara, Hornsby (non-Town Centre area), Beecroft-Cheltenham and Mount Colah-Mount Kuring-gai. Over time, as the developable area within these suburbs reduces, the share of development will increase in the Hornsby Town Centre. There will be significant development in Cherrybrook between 2021 and 2031, as development occurs on Government land around the Metro Station. The bulk of development is expected to be medium and higher density forms in these areas, but some continued small-scale infill should occur. This will be in the form of granny flats and secondary dwellings, which should help to maintain the number of separate houses into the future.

From 2016 to 2036, the largest increases are expected in the small areas of Hornsby Town Centre (+3,095 dwellings), Asquith (+2,391 dwellings), Waitara (+1,577), Hornsby Balance (+1,519 dwellings), Cherrybrook (+1,335 dwellings) and Mount Colah-Mount Kuring-gai (+909 dwellings). The built form that is expected with these developments is likely to have a bearing on the population. The majority of new dwellings that are expected to be built over the 2016-2036 period are medium and high-density apartments, many of which are relatively small in nature (especially two bedrooms). The apartment market that has emerged in Waitara has been dominated by young couples and young families. Some of these developments will also attract older persons, particularly those seeking low maintenance dwellings or those seeking to downsize within the Shire.