The City of Wyndham is a residential and rural municipality on Melbourne’s south-western fringe. It is traversed by the Melbourne-Geelong railway line and the Princes Highway. The City is centred on the residential areas around Werribee. The former rural service centre of Werribee became the focus of significant residential growth from the 1960s. This growth was focused in areas to the north of the original township, principally in the Hoppers Crossing area. The rural areas to the south boast significant amounts of intensive horticulture, while a large area is occupied by Melbourne Water’s Western Treatment Plant. The City also includes a substantial industrial presence, focused in the Laverton North area.

The City of Wyndham experienced a period of substantial residential expansion through the 1970s and 1980s. The primary housing market role that the City played over this period was to provide affordable home owning opportunities for families and prospective families from the western and south western suburbs of Melbourne. The City has continued to expand, particularly to the north and north west into new suburbs such as Tarneit and Truganina, but also south into Point Cook. In the late 2000s and early 2010s, the City of Wyndham consistently recorded some of the highest population growth rates in the country. This population growth has been the result of increased demand not only fuelled by demographic factors such as higher levels of net overseas migration and fertility, but also the availability of relatively affordable family housing. It is assumed that these migration patterns will continue into the future, but demand for new housing will also be driven by the maturing of households within the City of Wyndham, particularly as children leave home and start forming their own households. 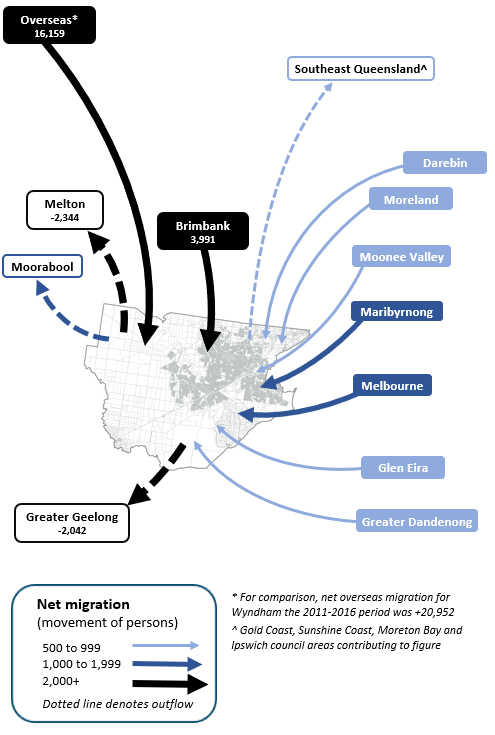 The rapid growth of the City of Wyndham in recent years belies significant spatial differences in housing market roles. These differences have occurred due to the growth of the City over many decades and its diverse range of land uses. More established suburbs such as Werribee and Hoppers Crossing have older population profiles compared to new suburbs such as Point Cook and Wyndham Vale. This will continue into the future as signficant new greenfield development opportunities are realised, and more recently developed areas start to mature. In demographic terms, these differences in role and function result in different population outcomes. Areas that are at the end of their rapid growth phase, such as Point Cook Central and Manor Lakes will start to mature as young families move through the age spectrum. Areas that developed during the 1980s and 1990s will stabilise or even decline in population as young adults leave the family home. Conversely, newly developing suburbs will undergo a rapid phase of development with a housing market role reflecting the predominance of young families.

There are significant difference in the supply of residential land within the City which will also influence population outcomes and household futures over the next 25 years. Established parts of the City of Wyndham will grow primarily through small scale infill projects or redevelopment of strategic development sites, such as the Werribee East Employment Precinct. Other areas, such as Cowies Hill, are nearing the end of their initial expansion and their residential supply will become exhausted. In general, the focus of greenfield growth in the City will shift towards the north and west into areas such as Mambourin, Mount Cottrell - Quandong, Tarneit North and Tarneit West. Improvements to transport infrastructure, such as the Regional Rail Link, will improve accessibility to the City of Wyndham and continue to drive growth. Overall, there are over 97,613 dwellings assumed in the forecast period, and the City is forecast to grow from 257,028 persons in 2018, to around 512, 591 persons in 2041.

Powered by .id (informed decisions) for City of Wyndham