Willoughby City is a residential, commercial and industrial LGA in northern Sydney, with the main centre at Chatswood, 10 kilometres north of the Sydney GPO. The City features a large residential population as well as significant employment areas based at Artarmon, St Leonards and Chatswood. The Chatswood CBD is one of the major employment foci for Sydney’s north.

While early urban development in Willoughby dates from the 1800s, the most significant period of development was the inter-war period, with the population of the City increasing to just under 52,000 by 1947. There was continued moderate growth during the 1950s and early 1960s with the population increasing to just under 55,000 by 1966. By the mid 1960s, the City’s residential spread was complete and the population stagnated thereafter and began to fall moderately during the 1970s and 1980s. Since 1991, however, the population has increased significantly from just over 51,000 persons to more than 65,000 by 2006. The increase in recent years has been driven by significant apartment construction in the Chatswood CBD and St Leonards, as well as intensification of existing residential areas, most notably in Chatswood, Artarmon and Naremburn.

Migration patterns and moves from 1996-2001 consisted predominantly of large net gains of overseas residents as well as people moving to Willoughby City from the North Sydney Council Area (to the south). Smaller gains of 100-200 people over this five year period were also recorded from the Mosman Council Area and Randwick City. Major net migration losses were to Ryde, Hornsby and Ku-Ring-Gai (and to a lesser extent, Warringah) as young families moved out in search of more affordable housing.

More recently, in the 2001-2006 period, North Sydney still continued to be a source of new migrants to the City along with overseas arrivals and to a lesser extent, the Mosman Council Area. Migration losses were still primarily to the City of Ryde, the Hornsby Shire, Ku-Ring-Gai Council and Warringah Council. In this 2001-2006 period, Brisbane and the Gold Coast in Queensland also became notable destinations for Willoughby City residents and resulted in a net migration loss.

In the most recent Census period (2006-2011, refer to map), the significant apartment construction in the Chatswood CBD and St.Leonards, as well as intensification of existing residential areas, resulted in higher net gains of people moving north from North Sydney and the City of Sydney. Areas to the north and west, such as Ryde, Hornsby, Ku-Ring-Gai and Warringah attract many young couples and families seeking more affordable housing opportunities. Increasing property values above the Sydney Metropolitan average have exacerbated housing affordability and rental stock at the lower end of the market is disappearing while rents are significantly increasing, thus driving some people out of Willoughby City. These areas of net migration loss to the north and west of Willoughby City also attract empty nesters and retirees who benefit financially from housing equity in the City of Willoughby. 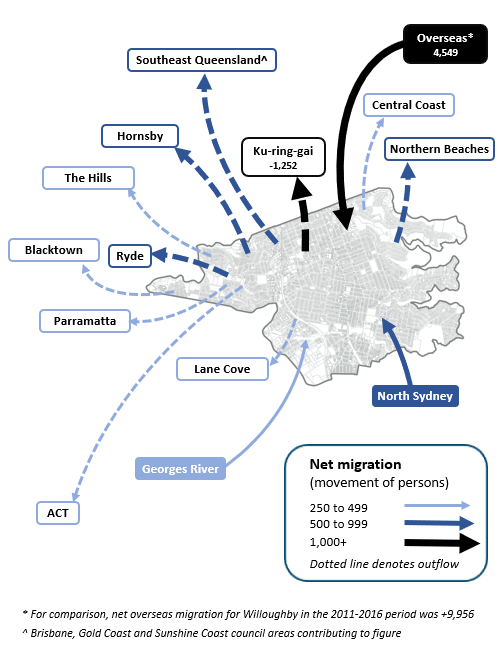 The primary housing market role that the City has played in the post war era has been to provide housing for families. This role continues to some extent, although most areas are no longer affordable for young families and a number of areas attract predominantly young singles and couples due to the higher density housing stock. Proximity to main transport hubs, "employment-rich" areas and education services also make many central parts of Willoughby City attractive to young (18-24 year old) lone persons and young couples without children. The role of overseas migration as a major driver of population growth has been established for many years and other areas to the south of Willoughby also provide impetus for growth, this is described in more detail in the above ‘Migration Patterns’ section. By contrast, areas to the north and west attract many young couples and families seeking more affordable home-buying opportunities. They also attract ’empty-nesters’ and retirees who benefit financially from housing equity in the City. Like most parts of Sydney, Willoughby loses population in net terms to Queensland in the latest Census period.

Within Willoughby City, areas have developed and will continue to evolve different roles within the housing market. Variations occur due to when areas were settled, the range of land uses in the area, developer interest and the varying planning policies in play. St Leonards, Chatswood (CBD), Chatswood (Balance), Artarmon and Naremburn tend to attract people in their late teens and early twenties due to the proximity to rail transport and other services, as well as the higher share of rental stock (apartments). Castle Cove - Middle Cove, Castlecrag, Chatswood West - Lane Cove North, Northbridge and Roseville continue to attract established and mature families. These areas also have very restricted development opportunities therefore growth dynamics seen in other parts of the City do not apply here and demographic concepts such as suburban regeneration and the suburban life cycle play a part in how these areas will change during the forecast period. Willoughby and North Willoughby - Willoughby East tend to attract young professional couples and singles without children. With a greater share of development in areas that attract young people, a greater share of young adults would be expected in the future.

There are also significant differences in the supply of residential property within the City which will also have a major influence in structuring different population and household futures over the next five to twenty years. A number of major development opportunities have materialised prior to the 2011 Census (e.g. most of ‘Pacific Place’ in the Chatswood CBD), some large developments commence in the first few years of the forecast and more have been identified in the short and medium term, notably in Chatswood (CBD) where increasing development has occurred close to existing centres and train stations (such as the Chatswood Interchange development) and to a lesser extent Chatswood (Balance), St Leonards, Willoughby and Artarmon. By comparison, Castlecrag, Castle Cove - Middle Cove and North Willoughby - Willoughby East are expected to have relatively minimal dwelling growth over the next 25 years.