The City of Vincent is an established, predominantly residential Local Government Area in Western Australia located about 3 kilometres north of the Perth CBD. While the area is primarily residential in nature, there are some still some areas within the City focused on industrial and commercial land use. Major features of the City include Hyde Park, Dorrien Gardens (BGC Stadium), Litis Stadium, Leederville Oval (Medibank Stadium), nib Stadium (Perth Oval), Beatty Park Leisure Centre, Loftus Recreation Centre, Central Institute of Technology (Leederville and Mount Lawley Campuses) and the Swan River.

While urban development in the City dates from 1829 when the Swan River Colony was established by the British Government, there was comparatively little residential development in the City until the 1870s and 1880s, spurred by the opening of the railway line in 1881. Rapid development took place from the 1890s into the 1910s, aided by nearby gold discoveries. Expansion resumed during the interwar period. Significant development occurred from the post-war years, largely due to residential infill. The City’s population was relatively stable during the 1990s, and then increased from under 26,000 in 2001 to about 31,000 in 2011.

Significant parts of the municipality have been gradually redeveloped and gentrified since the 1980s, with the attraction of greater numbers of young, single, professional, tertiary educated, middle to high income residents to the area. Housing prices in The City of Vincent have increased, with demand for new housing opportunities high across all areas of the municipality.

Traditionally, the predominant dwelling stock in the City has been federation era cottages. However, in the last two decades, an increased value of land for residential purposes had led to the rising construction of higher density residential development. Land previously used for commercial activities can become ’mixed use’ and single dwelling residential blocks increasingly have the potential to become apartments & townhouses.

The primary housing market role played by the City of Vincent has moved historically from the provision of modest workers’ housing to a high-demand ’lifestyle migrant’ area attracting professionals, young people, and students. Within the City, different areas have taken on different functions and roles within this housing market. The older southern suburbs of the LGA such as Leederville, West Perth and Perth have traditionally been home to more working class dwellings and to a mix of industrial and commercial land uses. The more northern suburbs of Mount Hawthorn & North Perth, were by contrast established slightly later and pitched to a different market - the dwelling stock in these areas includes larger houses and lots, with broader and more consistently designed residential areas, and (with the exception of public uses and parks) less mixing of land uses. It is assumed that the migration flows of younger professionals into higher density residential areas within the City will continue into the future. 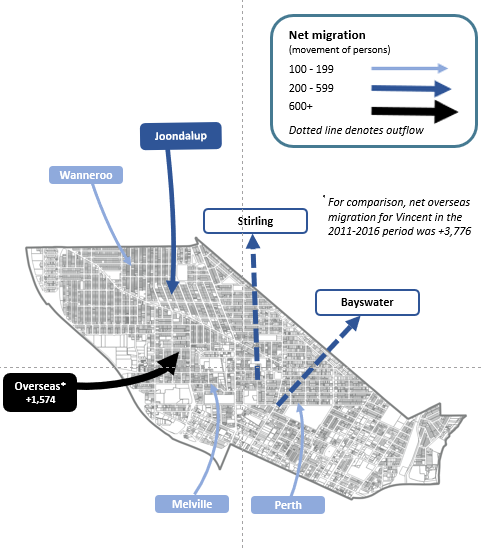 Reflecting the City’s development history, the dwelling stock in Vincent includes smaller ’heritage’ cottages through to contemporary apartment style housing. The City has a significant portion of private rentals (39% of all dwellings), and traditionally, tends to attract large numbers of young people, particularly those aged 18-24 years. While most areas of the LGA attract young adults; some suburbs have evolved to provide different roles within the housing market. Mount Hawthorn has a much higher proportion of family households due to larger dwelling stock, while Highgate attracts a slightly higher proportion of empty nesters and retirees than the rest of the LGA.

With the high demand for dwellings across the City, there are significant differences in the supply of residential property within the City which will have a major influence in structuring different population and household futures over the next five to twenty years. The major source of additional dwellings and households in the City of Vincent is through larger redevelopment sites, including the reuse of prominent industrial and commercial sites. The identified supply of such sites means that this trend is expected to continue to be an important influence on Vincent’s housing market. Perth, North Perth, East Perth - Claisebrook, West Perth and Leederville are particularly influenced in the next 10 years, with significant dwelling additions expected in these areas that have considerable commercial and mixed use activity along major roads along with large industrial sites with the potential for large scale residential development. New housing, generally for younger and higher income households, is increasingly important in the shifting profile of these suburbs. Similarly, medium and higher density development is expected to continue to be important in Mount Hawthorn, Mount Lawley and Highgate, albeit at lower levels than the suburbs mentioned above.

Powered by .id (informed decisions) for City of Vincent