The Hills Shire has increased significantly in population since the Second World War. Major periods of development include the 1950s and 1960s in suburbs such as Baulkham Hills, Castle Hill and West Pennant Hills. In the last twenty years, significant development has occurred in suburbs such Glenhaven, Kellyville, Beaumont Hills and Rouse Hill. The primary housing market role that the Shire played over this period was to provide affordable home owning opportunities for families and prospective families from areas to the south and east. This role is expected to continue with additional areas of the Shire being identified for future urban development over the next twenty years. This growth is to be focussed in Kellyville and Box Hill as well as remaining areas of Rouse Hill. In conjunction with new development areas in neighbouring Blacktown City, the Shire will therefore be catering for a significant amount of metropolitan Sydney’s demand for greenfield land. Demand for residential development in the Shire’s growth areas will come both from new households forming in the established areas of The Hills Shire as well as areas to the south.
Historical migration flows, The Hills Shire Council, 2011-2016 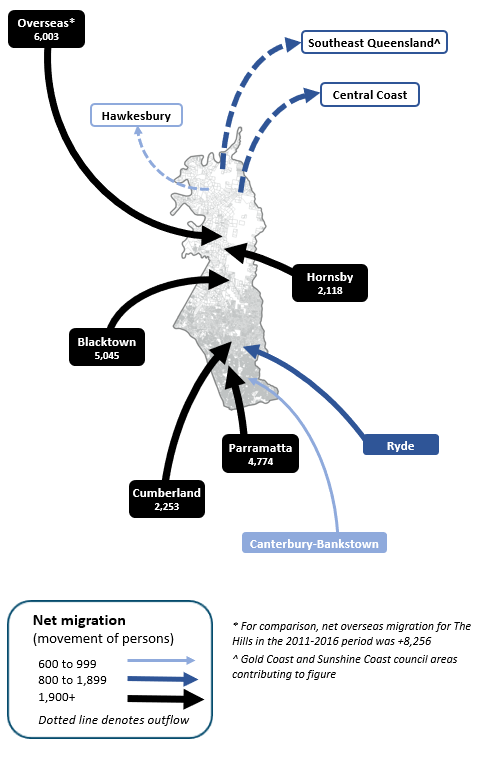 With the variety of residential areas, natural characteristics and period of development, different areas within The Hills Shire have developed different roles within the housing market. Areas to the south are attractive to families with older children. These areas are experiencing significant net loss of persons in their 20s. These are the children of families that settled in these areas in the 1970s and 1980s and are now at the stage where they are looking to establish new households elsewhere. Many of these new households would be heading to growth suburbs such as Kellyville, Rouse Hill and Beaumont Hills. These areas are expected to attract a both young and established family markets. This variety of function and role of the small areas in The Hills Shire means that population outcomes differ significantly across the LGA.

There are also significant differences in the supply of residential property within the Shire which will also have a major influence in structuring different population and household futures over the next five to twenty years. Large new ’greenfield’ opportunities have been identified in the growth areas, predominantly located in Kellyville, Box Hill and Rouse Hill. Additionally, the Sydney Metro Northwest rail project (connecting Rouse Hill to Chatswood) is under construction and is creating increased housing opportunities in proximity to a number of train stations being constructed within the Shire. This is reflected in increased in-fill development opportunities in Castle Hill, Baulkham Hills and West Pennant Hills which are also expected to contribute significant numbers of new dwellings. By contrast, the rural areas in the Shire’s north are expected to provide relatively low numbers of new dwellings over the forecast period.

Powered by .id (informed decisions) for The Hills Shire Council