Significant residential development in the City of Melton dates from the late 1960s and early 1970s when Melton township expanded from a relatively small rural service centre. The primary housing market role that the City played during this period was to provide affordable home owning opportunities for families and prospective families from the western suburbs of Melbourne. After a number of decades of incremental growth, the importance of the City of Melton within the western suburban housing market of Melbourne increased dramatically during the late 1990s. This is based predominantly on two factors. The first factor is the relative paucity of easily developable ’greenfield’ land in the City of Brimbank to the east, where most residential opportunities were exploited by the early 1990s. The second factor is the significant demand for new housing from new young families and couples from within Brimbank and to a lesser degree areas to the east, such as East Keilor, Avondale Heights and parts of Maribyrnong City. This is based on the fact that many of these areas developed in the 1970s and 1980s, with strong demand from children who grew up in these areas who are now forming their own households. In addition, the Cities of Maribyrnong and Brimbank are major ’ports’ for overseas migrants, many of whom would be expected to settle within Melton over the coming decades.

It is assumed that a number of these migration patterns will continue into the future, most notably flows into the City of Melton from the east, while the maturing of families within the Melton township area also provide additional demand, as children leave home to form households of their own within the City. The strong net flows from east to west into the City should be maintained over the forecast period. 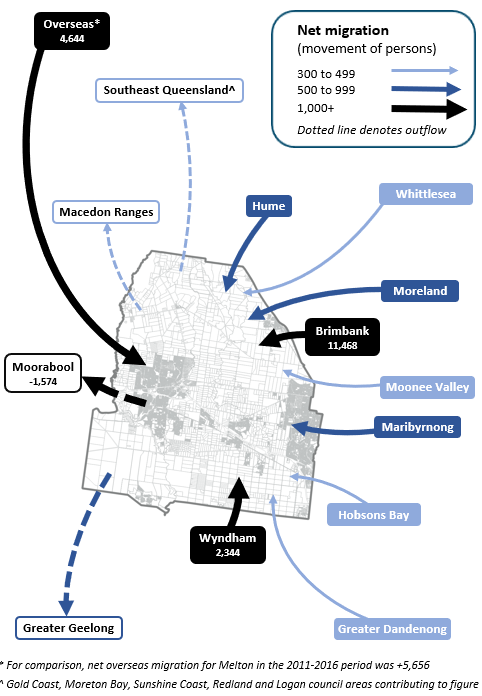 The attraction of the area is a reflection of the significant amount and quality of residential housing opportunities and the affordability of the area, relative to areas closer to central Melbourne. Local demand is moderate as the base population of the City is relatively small and the age structure is oriented towards young and mature families and therefore has fewer households being produced as a result of older children (late teens, twenties and even thirties) leaving home to form new couples and families. The established areas of Melton township that were developed during the 1970s and 1980s are exceptions to this rule. With the varied development and the unique geography of the City, different areas within the City of Melton have developed different roles within the housing market. Most areas were developed on the basis of housing for new families and couples, but at various price points. Some of the new greenfield residential development also caters to the mature adults/empty nesters and early retirees housing market. These people may be moving to various new residential estates within the City of Melton from areas closer to Melbourne with the aim of downsizing or purchasing housing stock that meets their lifestyle living requirements. Over time the maturation of suburbs in the township (Melton, Melton South, Melton West) has provided new opportunities for younger and older couples, with construction of more denser forms of housing and aged care. This is likely to continue and strengthen in the future.

There are also significant differences in the supply of residential property within the City which will also have a major influence in structuring different population and household futures over the forecast period. There are significant new ’greenfield’ opportunities in areas such as Cobblebank-Strathtulloh, Fraser Rise, Deanside, Rockbank, Fieldstone, Fraser Rise, Bonnie Brook, Truganina-Ravenhall, Melton West, Weir Views and Grangefields. Suburbs in the eastern part of the City - namely Caroline Springs, Taylors Hill and Hillside which commenced in the late 1990s/early 2000s and began the boom of the (then) Shire of Melton as a growth area, are now winding down. The established parts of the City of Melton do have some development areas, but increasingly – dwelling additions will come from vacant lots, infill and more intense use of existing residential land. Although the future housing stock will be predominantly in the form of separate houses, some areas such as Caroline Springs are seeing development of more dense housing, including apartment buildings and semi-detached terrace style houses. In the longer term, the new growth areas along existing corridors in the middle of the City are expected to accommodate a significant amount of new development supplying a large percentage of Melbourne’s outer westward expansion.

Powered by .id (informed decisions) for City of Melton