The Kyogle Council area is located in the Northern Rivers Region of northern New South Wales, about 760 kilometres north of the Sydney CBD, and 180 kilometres south of the Brisbane CBD.

European settlement dates from the 1830s, with land used initially for timber-getting. From the 1860s land was used more for dairy farming. The most significant growth took place during the early 1900s, spurred by improved access, expansion in the dairy farming industry and the establishment of numerous villages and small townships. The population of the Council area fluctuated from the 1960s, with the trend from the 1990s being one of slight decline.

The Kyogle Council area is a rural and rural-residential area. The largest township is Kyogle, with smaller settlements at Bonalbo, Cawongla, Geneva, Mallanganee, Mummulgum, Old Bonalbo, Tabulam, Wiangaree and Woodenbong. Kyogle is known as a gateway to many national parks including Border Ranges National Park and Toonumbar National Park. Rural land is used largely for dairy and beef farming and timber production, with some vegetable and grain growing.

The Kyogle Council area is served by the Bruxner Highway, The Summerland Way and the North Coast railway line.

The original inhabitants of the Kyogle Council area were the Bundjalung Aboriginal people.

The most significant growth took place during the early 1900s, spurred by improved access, expansion in the dairy farming industry and the establishment of numerous villages and small townships. The population of the Council area fluctuated from the 1960s, with the trend from the 1990s being one of slight decline.

More recently, between 2011 and 2016 Kyogle Council area population declined by 420 residents to 9,100 residents. Most of this decline has been driven by the migration of young adults to larger population centres nearby and in South East Queensland, generally to access education and employment opportunities 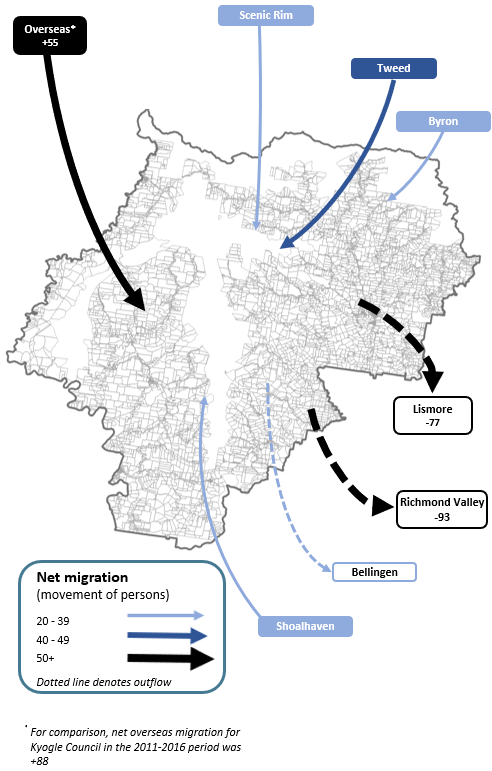 Opportunities for new dwellings are likely to be greatest in the township of Kyogle, especially in retirees. This will additionally provide more service based employment opportunities promoting growth in family households. Modest growth is forecast for smaller settlements in the Council area, with some additional growth expected in Rural South and North as additional townships receive sewerage schemes. In particular, Tabulam is likely to provide some opportunity for additional housing with the installation of water services over the next few years. Although demand for new development is low within these townships, it is expected that there will be some growth in support of employment in the agricultural sector. Ongoing opportunities for rural residential development have also been identified around the Kyogle township.