The City of Kingston in Melbourne’s outer southern suburbs combines a diverse range of land uses and economic activities. The City features significant residential areas in the west and south, while there are major industrial nodes around Moorabbin, Mordialloc-Braeside, Moorabbin Airport and Clayton South. The central and eastern areas contain significant areas of primary industry, such as high-value horticulture, flower cultivation and quarrying. There are also significant areas designated for leisure and environmental value, including golf courses and the Edithvale-Seaford Wetlands.

The history of urban development within the City reflects the variability and many areas have had inconsistent patterns of growth and change. This relates to a number of factors, most notably competing land uses and the changing value of economic activities. The demand for land for non-residential purposes has been strong in a number of areas for purposes such as horticulture, quarrying, waste disposal, environmental heritage, as well as manufacturing, leisure and transport needs, notably the Moorabbin Airport. Similarly, the rise and fall of industries and land uses has provided a new development possibilities. These influences are likely to continue into the future and many of the sites that have been identified for residential development over the period to 2021 are as a result of changing land uses (Gasworks in Highett, Epsom Racecourse in Mordialloc etc.)

The reason for population and household growth in the City of Kingston can be attributed to several sources. These include the local demand being created by young adults leaving home within the region, such as the Cities of Greater Dandenong, Glen Eira, Bayside and Kingston itself, who will establish new households and families. It also includes significant net overseas and interstate migration gains to the region and the fact that demand for housing tends to exceed supply in areas to the north and west of the City, notably in the Cities of Glen Eira and Bayside. The City of Kingston is also likely to benefit from the diverse range of housing markets that are active within the City, with young renters, first home buyers, families upgrading to second and third homes, empty-nesters and retirees and significant elderly accommodation all available within the municipality.
Historical migration flows, City of Kingston, 2011-2016 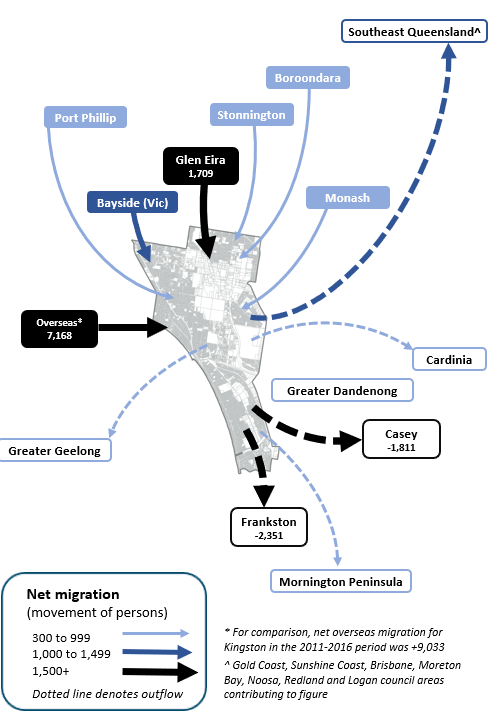 With the varied development phases, the overall size of the municipality and the different housing types, areas within the City of Kingston have developed different roles within the housing market. Areas such as Aspendale Gardens and Chelsea Heights have been predominantly developed for residential purposes in more recent years and are attractive to couples and families seeking new housing opportunities. Some of the areas, such as Bonbeach and Chelsea, attract older people (50-79 years), which is a reflection on the traditional coastal role of the area, as well as accessibility to aged care and retirement villages. This contrasts with Dingley Village and Mentone-Moorabbin Airport which tend to attract more mature families looking to upgrade to their second and third home. Some of the areas containing large commercial centres and significant rental dwelling stock in the municipality tend to attract young adults (18-29 years), such as Moorabbin, Mordialloc-Braeside and Cheltenham. This variety of function and role of the small areas means that population outcomes, in terms of total numbers and age and household type attributes, will differ significantly across the City of Kingston.

There are also significant differences in the supply of residential property within the City which will also have a major influence in structuring different population and household futures over the next five to twenty years. Some new ’greenfield’ opportunities previously identified in Waterways, Mordialloc-Braeside and Aspendale Gardens, have largely come to the end of that growth phase, while a number of areas have significant ’redevelopment’ parcels. These include Highett, Clayton South, Heatherton, Aspendale, Patterson Lakes and Bonbeach. There are also likely to be significant centre based development opportunities along the Frankston railway line in centres such as Moorabbin, Highett, Cheltenham, Mentone and Mordialloc.

Powered by .id (informed decisions) for City of Kingston