The City of Canning is located in Perth’s south-eastern suburbs, about 10 kilometres from the Perth CBD. The City encompasses a total land area of about 65 square kilometres, including significant river foreshore areas and parklands.

The primary housing market role that the City of Canning has played in the post war period has been to provide home owning opportunities for families and prospective families from the inner and middle southern suburbs of Perth. Most suburbs underwent substantial development in the 1950-70s. With the final stages of development of available greenfield sites in Canning Vale approaching completion, future development opportunities within the City are constrained, with future dwelling additions likely to result from the redevelopment of larger lots and market farms in suburbs in the north and east of the City, and greater densification of dwellings around strategic centres. As a result, the City’s traditional role within the housing market has been changing. The City has experienced a net loss of population through migration to greenfield sites in Gosnells, Cockburn and, albeit, to a lesser degree, the growth areas of Kwinana, Rockingham and Mandurah. This trend is likely to increase over time, particularly in relation to younger families and couples looking for affordable larger plan accommodation 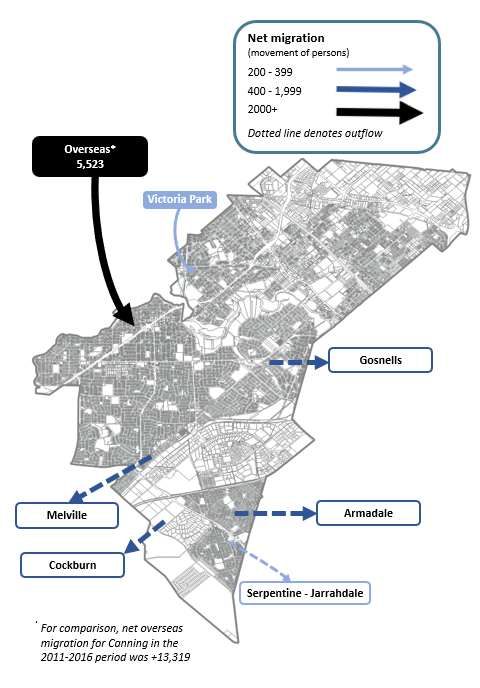 Given the variety of residential areas, natural characteristics, period of development and the proximity of some suburbs to Curtin University, different areas within the City of Canning have developed different roles within the housing market. Areas in the west of the City along the Canning River such as Shelley and Rossmoyne are attractive to mature families (usually third or fourth homebuyers), losing young adults as they leave home. The population in established areas such as Willletton-Leeming (part), Riverton and Parkwood also lose younger adults and home leavers and are areas with an ageing population living in smaller households; this is a trend expected to continue with a resulting increase in the number of older persons by the end of the forecast period. Ferndale and Lynwood have experienced some regeneration in recent years and, in consequence, have attracted younger adults, although these areas too are expected to increase in older persons. Canning Vale is fully developed with only small remnant pockets left to develop and the population is expected to age over the forecast period, with limited opportunities for young families to move into the area. East Cannington, Cannington and Queens Park have experienced growth, with the redevelopment of large lots and market gardens; these are areas in transition, attracting increasing numbers of younger, smaller households. The small areas of Bentley, Wilson and St. James, owing to their proximity to Curtin University, attract large numbers of students living in smaller or group households, and have large quantities of rental stock.

There are also significant differences in the supply of future residential land within the City which will also have a major influence in structuring different population and household futures over the forecast period. Potential has been identified for higher density development in and around the commercial area of Cannington, especially given the proximity of the Armadale railway line. There also remain opportunities for the redevelopment of market gardens and larger lots in East Cannington and Queens Park to produce medium density units, promoted by the establishment of Structure Plans in Queens Park and Cannington that promote higher residential densities and seek positive urban outcomes from the high level of infill development occurring in these areas. New student housing is also expected in Wilson and Bentley. Within Bentley, the redevelopment of the Bentley Regeneration Precinct provides significant opportunities with an expected 1,650 new dwellings being developed over the period. It is also assumed that, in the medium term, residential development opportunities will be similarly identified in the older urban areas of the City through the rezoning of former industrial sites and other areas currently zoned for other uses.

In the longer term, residential group dwelling development is expected in Ferndale, Parkwood, Lynwood and Riverton as these areas regenerate. There are likely to be other infill development opportunities throughout the City over the development period, as sites are consolidated or individual lots are subdivided to enable medium density development. It is assumed that there will be very little development opportunity in Canning Vale, once the remnant greenfield sites are exhausted.

Powered by .id (informed decisions) for City of Canning