Banyule is a large, established municipality in Melbourne’s north east. It stretches from Ivanhoe, located about 10km from the CBD, to St Helena and Eltham North, some 22km distant. It is characterised by its diversity, encompassing affluent residential areas in Eaglemont and Ivanhoe East, post war suburbia across the north east, and socially disadvantaged areas in Heidelberg West.

Banyule was largely rural until the railway line was constructed, reaching Heidelberg in 1888 and extending further northwards after that time, reaching Eltham (in neighbouring Nillumbik Shire) in 1910. This opened up the area for suburban development, particularly in those suburbs through which the railway passed. This included Ivanhoe, Eaglemont, Heidelberg, and Rosanna. Although some development took place in more distant suburbs, such as Greensborough and Montmorency, they essentially remained villages until the ever expanding metropolitan area of Melbourne reached their boundaries. In the post war period increasing car ownership allowed suburban development away from the railway line, extending into areas such as Viewbank and Lower Plenty. Famously, the athletes’ village for the 1956 Olympic Games was built in Heidelberg West, after which time ownership of the housing transferred to the State to operate as public housing. Most of Banyule had been built out by the 1990s and opportunities for greenfield development are confined to remnant parcels, mainly in the north.

The primary housing market role that Banyule has played post war period has been to provide family housing, attracting young families from neighbouring developed areas in what was then the northern growth corridor. This role still continues with the City’s large residential housing stock continuing to attract young and established families from neighbouring areas to the east and south, most likely parents in their 30s who are established in their careers and who are willing to pay a premium for accessibility and proximity to the City; however, with the commencement of large greenfield development in the City of Whittlesea further along the growth corridor, there is an out-migration of young families attracted to affordable housing opportunities, most likely people who have grown up within the Municipality in areas such as Greensborough. The Municipality overall loses young adults (home leavers and University) and retirees to other parts of Melbourne and further afield. This is particularly the case in the residential areas to the north of the City; however young adults and singles are attracted to specific locations such as Bundoora and Watsonia due to their proximity to Latrobe University and abundance of rental stock, and also Heidelberg and Ivanhoe due to their relative proximity to the CBD, abundance of rental stock and lifestyle opportunities. Heidelberg and Ivanhoe are likely to continue to attract young adults owing to the increasing development of apartment style dwellings and availability of rental accommodation. 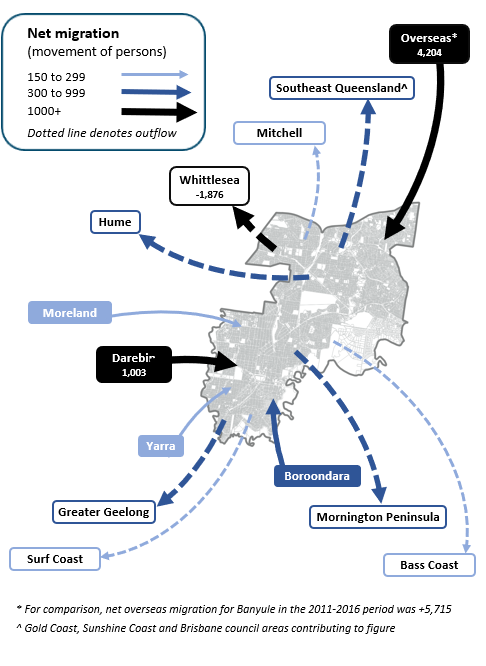 Areas within City of Banyule have developed different roles within the housing market due to the varied development phases, the large in-migration of overseas migrants, the activity of Government in public housing provision, the location of various institutions and associated accommodation (Latrobe University) and the changing value of residential land in the municipality. Areas such as Bundoora and Watsonia are attractive to tertiary students owing to their proximity to Latrobe University, whilst young adults, medical and nursing students and recent overseas migrants are attracted into Ivanhoe, Heidelberg, Bellfield, Heidelberg Heights and Heidelberg West because of opportunities for affordable rental accommodation, the large health precinct around the Austin and Mercy Hospitals and proximity to services and transport links. The predominantly residential areas of Rosanna, Montmorency, Viewbank, Yallambie, Macleod, Briar Hill and Greensborough tend to attract slightly older adults, many of whom are looking to upgrade within the Banyule housing market; however, some of these areas do tend to lose young and mature families owing as a proportion of families seek to upgrade elsewhere to larger dwellings. With the regeneration of Heidelberg West, this suburb continues to maintain a role in housing families as well as public housing renters. Many of the more recently developed areas to the north, such as Watsonia North and St Helena-Eltham North have an ageing population, as families who moved into the area continue to age in place. These areas have limited development opportunities and tend to lose young adults and home leavers, often to the growth areas in the City of Whittlesea. In contrast Eaglemont and Ivanhoe East maintain a prestigious and exclusive role within the Melbourne housing market, with properties tending to be tightly held and opportunities to purchase attracting wealthier families. This variety of function and role of the small areas in City of Banyule means that population outcomes differ significantly across the municipality.

Due to the long history of urban development in Banyule and lack of greenfield sites, any future growth occur predominantly from the redevelopment of strategic sites (such as the recently development College Views estate), or through policies which seek to encourage growth in key locations such as activity centres or around railway stations. Heidelberg, Ivanhoe and Greensborough are forecast to accommodate most new dwellings over the period 2016-2041, as there are specific policies (structure plans) to encourage densification. Within the Structure Plan areas there is likely to be apartment and medium density town house type development. This is further encouraged by the imposition of a Neighbourhood Residential Zone over a significant proportion of the City, limiting the level of future infill development. Within areas subject to this zoning, future dwelling gain will be limited dual occupancies; within the remaining residential areas, development is also likely to be relatively low scale and limited to townhouse style dwellings and villa units. In contrast to this, suburbs such as Ivanhoe East, Lower Plenty and Eaglemont offer very little scope for development (owing to a combination of heritage and character, lot size and street layout factors) and hence are not expected to record much growth in the period to 2041.

Powered by .id (informed decisions) for City of Banyule