The City of Joondalup is a predominantly residential Local Government Area in Western Australia in the northern suburbs of Perth. While the area is primarily residential in nature, there is a large commercial and industrial district in the Joondalup City Centre. Other sizeable commercial centres can be found in Hillarys while smaller commercial centres can be found in most other suburbs throughout the council area. The LGA also boasts three tertiary institutions within Joondalup City Centre (Edith Cowan University, West Coast College of TAFE and Western Australia Police Academy) and is home a major public hospital (Joondalup Health Campus), Hillarys Boat Harbour and The Aquarium of Western Australia (AQWA).

While urban development in the City dates from the nineteenth century, there was comparatively little residential development except in the south of the City until the late 1960s. Urban growth in the City of Joondalup was heavily focussed from the 1970s to 1990s, with conversion of horticultural areas to residential purposes. By 2000, much of the City had been urbanised, with only a few of the northern suburbs remaining to be fully developed. Along with Joondalup City Centre, these areas have been the focus of development over the last 12 years. As of 2012, the only remaining residual greenfield land in the LGA can be found at Burns Beach and Iluka.

The process of redevelopment has been steadily increasing in the south western suburbs of the LGA. These areas, many first developed for residential purposes in the late 1960s and 1970s have had rising redevelopment over this period. These suburbs include Craigie, Duncraig, Greenwood, Hillarys, Kallaroo, Mullaloo, Marmion, Padbury and Sorrento. This is a process set to continue and even heighten in the future as more areas in the City are designated for higher density development.

The population of the City of Joondalup has grown moderately over the last ten years. The residual greenfield opportunities and increasing redevelopment has been offset by a decline in average household size as many more areas of the City have become dominated by smaller households (one and two persons). The population is likely to continue to increase in the future as a result of continued growth in housing stock and a comparatively stable average household size.

The primary housing market role that the City played in the last 40 years was to provide affordable housing for families. While families continue to form the majority household in the most of the LGA, as the population continues to age in the older areas of the city, this role is expected to change. The increasing construction of flats, units and townhouses, will become more attractive to other household types, especially younger adults. The presence of Edith Cowan University and proximity to employment and the beach has drawn many more persons to the City, particularly those from overseas. It is assumed that a number of the migration patterns will continue into the future, most notably flows into the City from overseas, the attraction of families to coastal areas and younger adults to higher density residential areas. 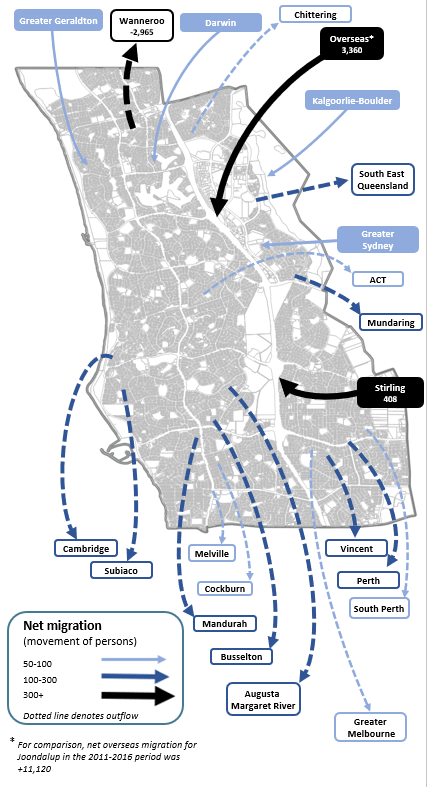 Within the City of Joondalup, areas have developed and will continue to evolve different roles within the housing market. Variations occur due to when areas were settled, the range of land uses in the area, developer interest and the varying planning policies in play. Most areas of the LGA attract families, both young and mature; these suburbs can range from recently developed areas like Burns Beach, Currambine, Iluka & Kinross to more established areas such as Duncraig, Hillarys, Marmion and Sorrento. Alternatively, areas such as Craigie, Beldon, Heathridge, Joondalup and Padbury tend to gain people in their late teens and early twenties due to the proximity to the education facilities, transport, commercial areas and the availability of rental housing.

There are also significant differences in the supply of residential property within the City which will also have a major influence in structuring different population and household futures over the next five to twenty years. A number of development sites have been identified, notably, ongoing development in Burns Beach, Iluka and Joondalup City Centre, the proposed development at Ocean Reef Marina and increased densities of 10 Housing Opportunity Areas across the city. These sites, plus many others, will contribute significantly to the City’s population growth over the forecast period. There are likely to be other infill and residential redevelopment opportunities throughout the City, albeit lower than the major growth areas identified above.

Powered by .id (informed decisions) for City of Joondalup