Fraser Coast Regional Council is located in the Wide Bay Burnett are of Queensland. The largest town, Hervey Bay, is located approximately 290 kms north of Brisbane. The other large town in the Regional Council, Maryborough, is located 40 km away. There are several coastal communities, particularly along the northern coastline, and smaller coastal villages on the eastern coastline abutting the Great Sandy Strait. The Region is traversed by the Bruce Highway, the major road link along the Queensland coast. Fraser Island, a national park with UNESCO World Heritage status, lies off the coast and provides a focal point for tourism.

European settlement in the region dates back to the mid nineteenth century with an agriculture based economy and a regional centre focused on Maryborough. From the late 1970s, the town of Hervey Bay began to grow rapidly, spurred by amenity led and retirement migration. This resulted in a major shift in the settlement pattern and in the late 1980s, Hervey Bay’s population overtook that of Maryborough’s. The local economy also shifted from its rural focus to one based more on services and tourism.

Fraser Coast’s recent growth has been driven by net in-migration, led not just by retirees, but also families (both young and established). The major source of new residents is from other parts of south eastern Queensland and neighbouring councils such as Gympie Region and South Burnett. In contrast, in-migration from interstate is less significant. Like most regional areas of Australia, Fraser Coast Regional Council loses young adults (18-24 years), who move to Brisbane and elsewhere for education and employment opportunities.
Historical migration flows, Fraser Coast Regional Council, 2011-2016 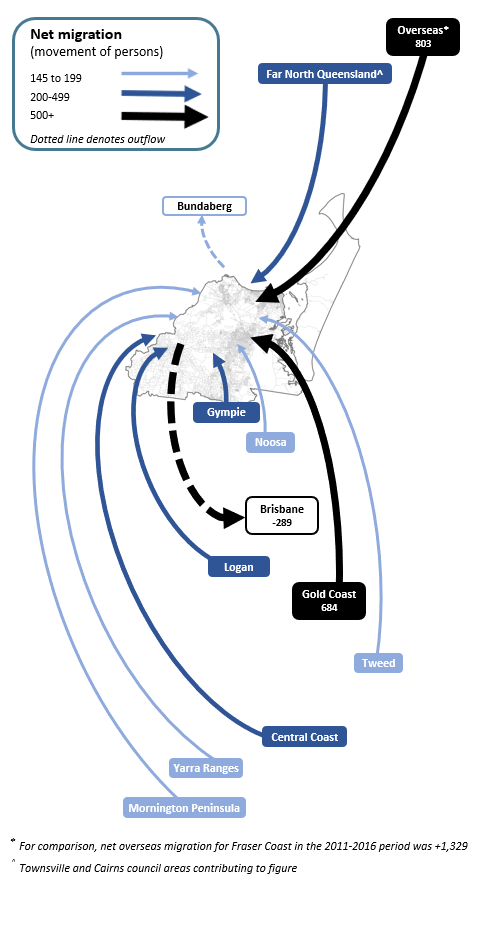 The role traditionally played by Fraser Coast Regional Council is to provide home owning opportunities to families from other parts of Queensland. Since the 1970s retirement migration has played an increasingly important role in fuelling population growth and there are a number of retirement/lifestyle villages which cater for the needs of these mature households. Fraser Coast Regional Council is also seen as a relatively affordable location for housing, particularly away from the coastal strip. This encourages in-migration of family households and results in a dual housing market.

There is a large supply of residential land which will influence housing and population outcomes across Fraser Coast Regional Council. Significant supply has been identified in Hervey Bay - South West and the Dundowran - Nikenbah Growth Area, an expansion of the Hervey Bay urban area. There is also greenfield supply in Craignish - Dundowran Beach. In contrast the rural areas are expected to record modest growth, centred around rural residential estates and smaller subdivisions, particularly those parts with good proximity to Maryborough or the Bruce Highway. Overall, there are 17,990 dwelling additions assumed in the forecast period, with the population forecast to reach 138,350 at 2041.