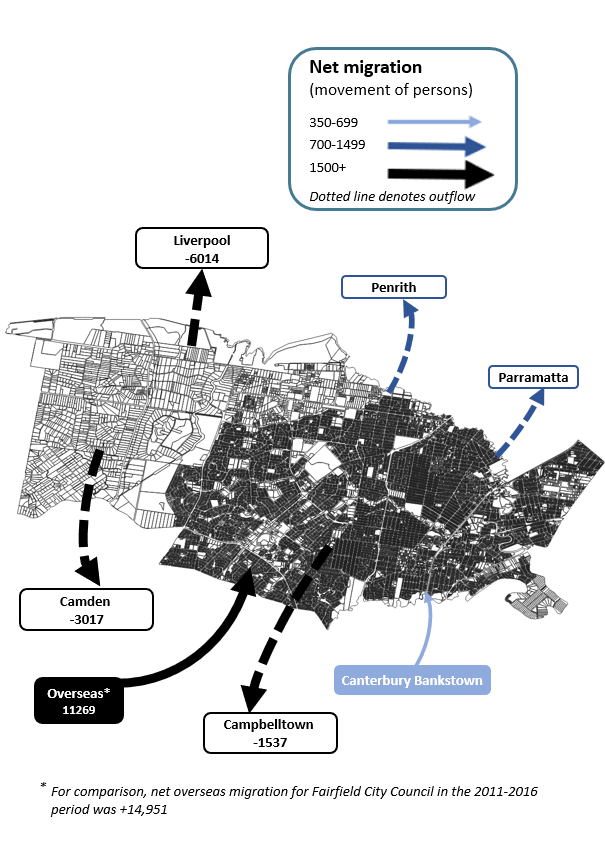 ld City is a residential, commercial and industrial LGA in south western Sydney about 32 kilometres south west of the Sydney GPO. The City features a large residential population as well as significant employment areas based around large-scale industrial estates at Wetherill Park, Smithfield as well as the major commercial centres of Fairfield and Cabramatta.

While early development of the area dates from the 1800s, the most significant period of development has been the immediate post war era. The City’s population increased from around about 27,000 in 1948 to 120,000 in 1979. This was driven by large scale housing commission development in the 1950s, continuing with larger greenfield developments in the 1960’s right through to the 1990’s. The earlier period of development was concentrated in areas around Fairfield, Canley Vale and Cabramatta and the east of the City. The post war era saw development spread westward, away from the rail lines firstly into suburbs such as Fairfield West, Canley Heights and Mount Pritchard. By the 1970’s suburbs such as St Johns Park, Bonnyrigg, Wakeley and Prairiewood were the main development fronts followed by Edensor Park, Greenfield Park, Bossley Park and Bonnyrigg Heights. By the early 1990s, the City’s only remaining residential front was Abbotsbury and accordingly, the population of the City has decreased since 2001.

The primary housing market role that the City has played in the post war era has been to provide relatively affordable housing for young families. This role continues to some extent, although the City of Liverpool to the south has overtaken Fairfield in terms of new dwellings in the last 15 years. Relatively high rates of infill development in the City are expected to continue, dominated by growth in Fairfield, Cabramatta and Bonnyrigg, and to a lesser extent in centres such as Smithfield, Fairfield Heights, Villawood and Prairiewood. This is based on large numbers of new medium density dwellings being established in the City, catering for a range of housing types particularly young adults and couples.

Fairfield City comprises significant diversity in terms of residential and economic role and function. Fairfield CBD is the most ‘urban’ part of the City and along with the other Activity Centres in the east of the City such as Cabramatta, Fairfield Heights, Canley Heights and Villawood attract young adults to its higher density residential dwelling stock. More recently developed areas such as Abbotsbury, Horsley Park - Cecil Park, Bonnyrigg Heights, Edensor Park, Greenfield Park and Bossley Park by contrast have been, and are expecting to continue to, lose young adults as children leave home to establish households elsewhere. This variety of function and role of the small areas in Fairfield City means that population outcomes differ significantly across the LGA.

There are also significant differences in the supply of residential property within the City which will also have a major influence in structuring different population and household futures over the next five to twenty years. Large new medium density opportunities have been identified in Fairfield, Cabramatta, Bonnyrigg, Smithfield, Bossley Park, Fairfield Heights and Villawood and as a result, this area will contribute significantly to the City’s population growth over the forecast period. Canley Heights, Canley Vale, Wetherill Park, Edensor Park, Mount Pritchard, Fairfield West, Cabramatta West and Prairiewood are also expected to add significant numbers of dwellings over the forecast period. All areas are expected to increase in population to some extent, driven by both infill and site-specific residential development.