The City of Cockburn is located in Perth’s outer southern suburbs, approximately between 15 and 29 kilometres south of the Perth GPO. The area is made up of residential, industrial and rural residential areas and is developing a retail and commercial centre in the suburb of Cockburn Central. The post war years saw the commencement of housing development in areas such as Hamilton Hill, Coolbellup, Spearwood and Yangebup. The area gained City status in 1979, and has undergone a period of rapid growth since the 1980s, with further development in areas such as Spearwood and Yangebup, and the development of Coogee and Bibra Lake. In the 1990s, areas such as Atwell and Beeliar commenced development and, more recently, greenfield sites in Success and, latterly, Aubin Grove have provided considerable new housing opportunities. Industry is a major influence on the pattern of future development. The City of Cockburn is an important centre for ship building, with the suburb of Henderson being home to the Australian Marine Complex, one of the largest ship building precincts in Australia. Furthermore, in 2001, the Hope Valley-Wattleup development program identified the southern suburb of Wattleup as part of a major industrial precinct shared with the neighbouring Town of Kwinana, known as Latitude 32. As part of this program the township of Wattleup has been largely demolished to provide land for future industry, with remaining residential and rural properties in the area expected to disappear in the near future.

The primary housing market role of the City has been to provide affordable home owning opportunities for families and prospective families from southern Perth. This traditional role is likely to continue in the short term with the continued development of the growth areas of Success, Aubin Grove and Hammond Park and the re-zoning of areas of Banjup for urban development, with the first houses completing in 2016. There is also extensive redevelopment of market gardens in areas such as Munster and Spearwood, which has provided a steady continuing supply of new housing opportunity. More recently, development aimed at specific markets has been occurring along the coast, in particular attracting second and third homebuyers and ’empty nesters’ and retirees, with the commencement of the development of Port Coogee. In the longer term, these patterns are expected to change. The availability of large tracts of ’greenfield’ land and other suitable sites for traditional family housing is decreasing within the City and are likely to be substantially exhausted before 2036, whilst significant sites are being made available in the neighbouring area of the Town of Kwinana which is likely to meet an increasing proportion of the regional demand for this type of housing. Despite this, the development of higher density areas around Cockburn Central, with its rail links into inner Perth, Rockingham and Mandurah, and the continuing revitalisation of areas such as Hamilton Hill, Spearwood and Coolbellup and, in the near future, Bibra Lake, are providing housing opportunities to younger and older smaller household types in higher density developments. The Cockburn Coastal Structure Plan is also likely to have considerable impact in the longer term, providing further coastal development aimed at younger smaller households as well as the empty nester and retiree market, 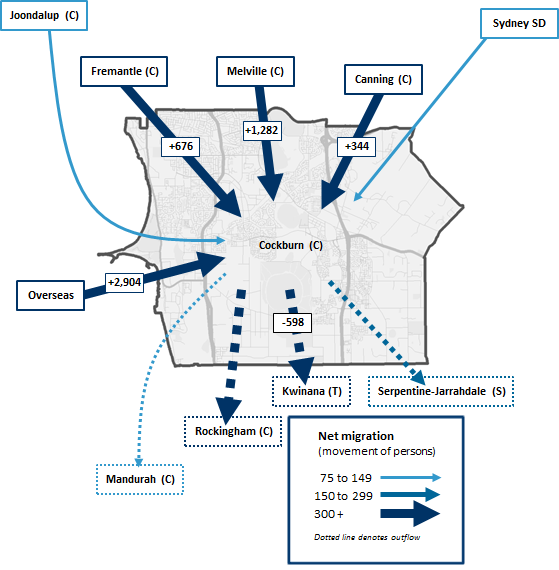 The variety of periods of settlement in the City mean that various suburbs are at quite different periods in the suburb lifecycle. In the older areas of the City, such as Spearwood and Coolbellup, the original settlers have passed on, resulting in a diversity of age groups and housing needs. Areas such as Yangebup and, to a lesser extent, Hamilton Hill have experienced some new residential development over recent years resulting in some regeneration of the area. The population in older areas such as Bibra Lake, Leeming and North Lake, are undergoing an ageing process and, as children leave home, a growth in the number of older and smaller household types. Within Bibra Lakes, the proposed revitalisation is an initiative designed to provide more diverse housing to meet the changing needs of this community, and to promote the regeneration of the area by attracting younger families and adults into the area. Recently developed areas such as Atwell, and suburbs such as Beeliar and Success, which are likely to be fully developed in the near future, are likely to age over time with fewer opportunities for young families to move into the area. It is also expected that Hammond Park, Aubin Grove and the recently created suburb of Treeby will develop substantially over the next ten years, repeating the pattern of development in Success and Atwell, attracting young and prospective families, with a relatively large proportion of primary and pre-school aged children.

There are also significant differences in the supply of residential property within the City which will also have a major influence in structuring different population and household futures over the forecast period to 2036. There remains significant further potential within the existing growth areas of Success and Aubin Grove with new ’greenfield’ opportunities being identified in Hammond Park and Treeby. There is also additional potential owing to high density developments in and around Cockburn Central and the Cockburn Coastal Structure Plan area. Medium-density development in the older and established urban parts of the city (Hamilton Hill, Spearwood and Coolbellup) is also likely to occur as these areas redevelop. There are also likely to be other greenfield, rural residential and, most notably, infill development opportunities throughout the City, albeit at lower levels than the growth areas identified above. In contrast, Jandakot is likely to have very low levels of residential development owing to constraints around other land uses such as mineral extraction, rural activities and water catchment. Similarly, drainage issues and the preservation of wetlands are likely to constrain future development in a number of areas where there are remnant parcels of otherwise developable land. Finally, Wattleup and Henderson are highly unlikely to have any future residential development as these are key locations for current and future industry.

Powered by .id (informed decisions) for City of Cockburn