The City of Belmont is named after Belmont Farm, one of the first farms to be established in the Swan River Colony. Long before settlers arrived, however, Noongar people had names for the places they owned and used. For example, the site of Ascot Racecourse was formerly known as Ngattaba. In the late 1890s the gold rush brought many people to the area and housing demand increased vastly. Brickworks used the clay by the river. Poultry farms, dairies and piggeries also sprung up, along with Chinese market gardens. The effects of the gold rush were vast. Perth quickly became a city, and old wooden buildings were torn down, replaced by new brick ones. The increases in population led to a demand for housing. In the 1890s, speculators began buying up Belmont land for subdivision. Ascot was an early and successful subdivision in the City. Designed as a "garden suburb", the river end of the suburb was advertised to middle-class buyers who were looking for a brick bungalow on a quarter-acre block. Redcliffe Farm developed from 1895 however subdivisions in South Perth and Victoria Park proved more popular than those further out in Belmont.

Eventually, settlement began to extend further down Belmont Avenue into Kewdale and Cloverdale. The new residents were pig farmers attracted by low rates and cheap land. By the end of the 1890s, Chinese market gardeners were also prominent in the Belmont area. Until the late 1890s, there was practically no planning control in Belmont. Agricultural and timber businesses were unregulated, and the increasing population needed roads.

The rapid post-war growth of Belmont can be seen by the fact that the 1947 population was 5,700 and just six years later it had grown to 16,700. Many new homes were constructed, often by the State Housing Commission. To assist with growth, in 1950 three new suburbs were created: Kewdale, Cloverdale and Newburn. Cloverdale was named after Cloverdale Estate, which had been subdivided in 1910. Kewdale, formerly South Belmont, was an adaptation of Kew Street, one of the first roads in the district. Newburn, now absorbed by Perth Airport, was originally Red Gum Forest, a small rural community east of Redcliffe from 1912. The suburb was resumed by the Commonwealth Government in 1970, doubling the size of the airport. In the 1950s and 1960s there was an upsurge in the construction of industrial buildings. With land at a premium nearer the city and high prices being asked for it, manufacturers turned to Belmont where there were big areas of land offered.

In recent years, the migration patterns in the City of Belmont have been dictated by its place in metropolitan Perth and by its role and function. Largest net migration gains nowadays are from overseas although not all of those new residents necessarily come to the City of Belmont directly from overseas, some may live elsewhere first before settling here. Internally, the City of Belmont gains most residents from Victoria Park, South Perth, Canning, Bayswater and the City of Perth itself. Interestingly, there is also a net gain of residents to the city from Kalgoorlie/Boulder, a reflection of the wide influence that the mining industry has in Western Australia. Net losses of residents are to the LGAs of Swan, Kalamunda, Gosnells, Armadale, Rockingham, Wanneroo and several other growth areas which have a steady supply of housing to meet the needs of local residents, usually young family-forming couples, who are looking to establish themselves elsewhere and find more preferred housing opportunity. 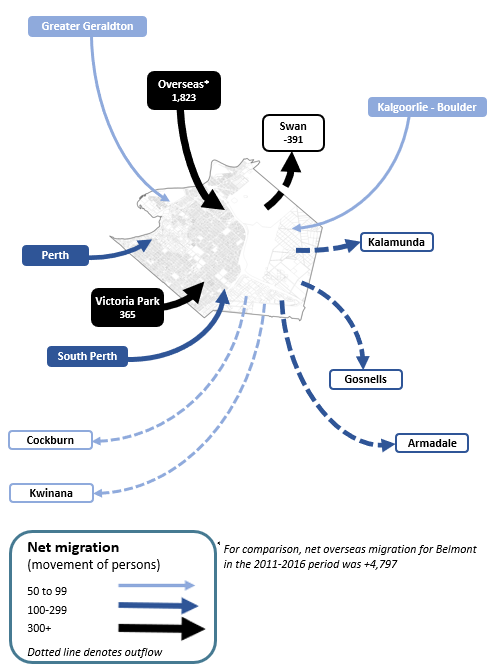 Over the years, the City of Belmont had several different roles and functions. During initial settlement it became an area of affordable housing for workers and farmers. In recent years, the role and function of the City as a whole has been one which attracts younger school leaving adults aged 17-19 years old, young professionals and workers aged 20-24 years and young couples aged 25-29 years. Almost three quarters of the City’s residents work outside of the LGA, namely in the City of Perth, City of Canning and the Town of Victoria Park. What this means is that the role and function of the City of Belmont is to provide affordable housing options for many of those city-based workers. Those residents aged 30-39 years who are looking to form family households or who already have children (aged 0-9 years) and are looking to purchase a family home tend to leave the LGA. Other than these two notable net migration patterns, older age groups tend to see a net neutral change in terms of migration.

Within the City, there are some differences in terms of role and function. Ascot plays a more diverse housing market role with modest gain in several age groups, namely tertiary students, mature families and empty nesters. Belmont and Rivervale have a role and function dominated by gains of university students and the young workforce. This net migration profile is similar to what the Redcliffe-Perth Airport small area experiences. Cloverdale mirrors the City of Belmont’s role and function with a gain of young adults and a loss of families who move away in search of preferred housing elsewhere. On the other hand, the suburb of Kewdale is forecasted to gain families aged 25-34 year olds with 0-9 year old children.

The City of Belmont significantly developed over several time periods. Initially, when Perth was settled the City of Belmont was established for farming. Following on from that, during the gold rush period of the 1890s, housing supply increased dramatically. Post World War II growth of the City added much of the housing stock that can be seen in the established areas today. In terms of dwelling types, separate houses make up 64% of the City of Belmont/s housing stock (as at 2016), a decrease in share from 72% five years prior. Increases in medium and high density dwellings are becoming a trend, and can be expected to continue in the future. Much high density development since 2006 in riverside areas such as Rivervale have played a part in altering the dominance of separate houses as the predominant dwelling type in the LGA – however, separate houses will remain as the most common dwelling type for years to come.

In the short term, many high density developments have developed mainly in Rivervale with some more high density developments identified in Rivervale but also Belmont and Ascot. Large scale developments such as The Springs have been developing in Rivervale for several years now and are expected to continue until completion in the mid 2020s. From the later part of the 2020s, the development of the "Development Area 6 Vision" (DA6 Vision) area will contribute much dwelling supply to the Redcliffe-Perth Airport area in the form of medium/high density dwellings and along with business and commercial development of the Belmont Business Park in the same period, the City of Belmont may begin to experience retention of some of those residents who previously left the area in search of more readily available and family-preferred housing opportunity elsewhere.

Powered by .id (informed decisions) for City of Belmont