Bayside Council is located in the inner southern suburbs of Sydney, about 7-15kms south of the CBD. It was created in 2016 via a merger of the former City of Botany Bay and Rockdale City Council. It is an established part of Sydney’s urban fabric and contains nationally significant ports (Sydney International Airport and Port Botany) and there are large tracts of industrial land in Mascot, Botany, Banksmeadow, Arncliffe and Wolli Creek. Some of this is being redeveloped into high density residential areas. The remainder of the City is primarily established low density residential with smaller pockets of commercial, retail and industrial land.

Residential and agricultural development dates back to the 1830s when farms were established around the Cooks River. Market gardens were established but over time manufacturing and industrial activity became more important, providing a source of employment for the growing population. Residential expansion was facilitated by the expansion of Sydney’s tram network network into Botany and Mascot (now largely replaced by buses), and the construction of the Illawarra railway line through the Rockdale region in the late nineteenth century. Residential growth continued into the early and mid twentieth century, particularly as the Sydney metropolitan area continued to expand southward. The primary housing role was to provide housing for families working in the CBD and nearby industrial areas. A notable feature of development was the suburb of Daceyville, built using the "garden suburb" principles that arose from the associated movement in the United Kingdom. In the 1950s and 1960s the region became a popular area for migrant families to settle. In common with many parts of inner Sydney, the population stablised and showed some decline in the late twentieth century. In more recent years, this cycle has been reversed, particularly with the redevelopment of former industrial lands in Mascot and Wolli Creek for housing. This process is continuing and will shape population and dwelling outcomes into the future.

Bayside’s migration profile has changed substantially in the last twenty years. The surge in high density housing has seen an upswing in the inflow of young adults aged 18-29 years. In addition, some suburbs have undergone gentrification and/or regeneration, resulting in minor increases in young and established families in suburbs such as Botany- Banksmeadow, Pagewood and Rosebery. There are net in-flows of people from neighbouring councils such as the City of Sydney, and outflows to other parts of middle and outer southern Sydney eg Georges River, Liverpool and Blacktown. 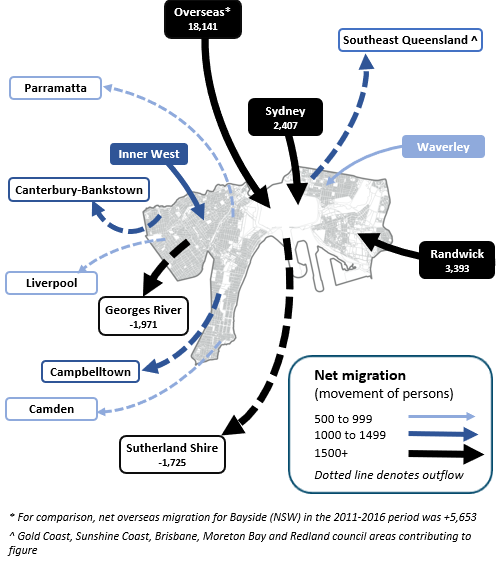 The tradional role and function of the former Botany Bay and Rockdale municipalities was to provide both home owning and rental opportunities for families, but as mentioned above, there have been critical demographic and housing shifts resulting in significant change. The redevelopment of former industrial sites around Mascot Station and Wolli Creek, attract young adults seeking home owning opportunities or rental acommodation. Bayside Council is strategically located near the airport, CBD and major universities, all of which act as pull factors for new residents. This role and function is assumed to continue into the future as several large residential projects are proposed across the municipality, and these tend to be more suited to, and attractive to, smaller households.

Future residential development in the City is constrained by a number of factors, including aircraft noise, relatively small residential lot sizes and competing land uses - particularly planning controls in industrial areas and demand for office and commercial space. However, these constraints are largely overcome by the the City’s strategic location in the Sydney metropolitan area, with good accessibility to both the CBD and the airport, as well as the high level of demand for inner city living. Around 30,000 new dwellings are assumed over the period 2011-2036, the majority of which are assumed to be realised in the short to medium term as former industrial sites are converted to residential uses. Over time the supply of strategic sites diminishes, which will result in lower population growth in the long term.

However, there are significant spatial differences in the supply of residential land across the municipality that will have a major influence in structuring different population and household futures. The focus of growth will be in the Mascot Station Precinct and Wolli Creek - Bonar Street Precinct, which are undergoing transformation from industrial to residential and commercial areas. More than 13,500 dwellings are forecast for these areas between 2011 and 2036, which will mainly be high density apartments suitable for smaller households such as young couples and singles seeking housing close to the CBD. Significant residential supply has also been identified in Rockdale, Botany - Banksmeadow and Hillsdale - Eastgardens. In constrast, future development in Daceyville is forecast to be minimal as a result of the heritage controls in this suburb, and the large proportion of housing stock managed by Housing NSW. Overall, the population of Bayside Council is forecast to grow from around 145,000 in 2011, to 213,300 in 2036.