Yarra is an established municipality including some of Melbourne’s earliest suburbs. Following initial European settlement from the 1830s, significant development in the Yarra area occurred during the 1880s and 1890s. During this period industry established a strong presence in the area - particularly focused on the Yarra River and surrounding low-lying regions - and associated working class housing dominated the dwelling stock. The late 1800s period remains prevalent in the built fabric of the City, in the form of many Victorian-era terrace and cottage houses, and major industrial buildings. The post war period was another time of substantial development in Yarra, when considerable numbers of migrants moved into the area and public housing estates (including high-rises) were built. Population loss occurred in the Yarra area between the 1960s and 1980s, alongside a rapid decrease in household size. Subsequently, significant parts of the municipality have been gradually redeveloped and gentrified since the 1980s, with the attraction of greater numbers of young, single, professional, tertiary educated, middle to high income residents to the area. Housing prices in Yarra City have increased, with demand for new housing opportunities high across all areas of the municipality.

Industry remains a feature of Yarra’s economy and its land use pattern. In the last two decades, however, the land use geography of the City has undergone change with the closures of older industrial establishments and an increased value of land for residential purposes. This is reflective of the changing economic function of the Melbourne inner region in general. Retail and commercial strips in the City are focused on the arterial road network, with many being known for niche marketing. The City also comprises significant areas of parklands, educational, and medical uses.

The primary housing market role played by Yarra City has moved historically from the provision of modest workers’ housing connected with nearby employers through a period of affordable housing area for migrants and lower income households (including rooming houses) to a high-demand ’lifestyle migrant’ area attracting professionals, young people, and students. Within the City, different areas have taken on different functions and roles within this housing market. The older, low-lying suburbs of Fitzroy, Collingwood, Abbotsford, and Richmond have traditionally been home to more working class dwellings and to a mix of industrial and commercial land uses. The outlying suburbs of Carlton North-Princes Hill, Clifton Hill, Fitzroy North, and Fairfield-Alphington, were by contrast established slightly later and pitched to a different market - the dwelling stock in these areas includes larger houses and lots, with broader and more consistently designed residential areas, and (with the exception of public uses and parks) less mixing of land uses 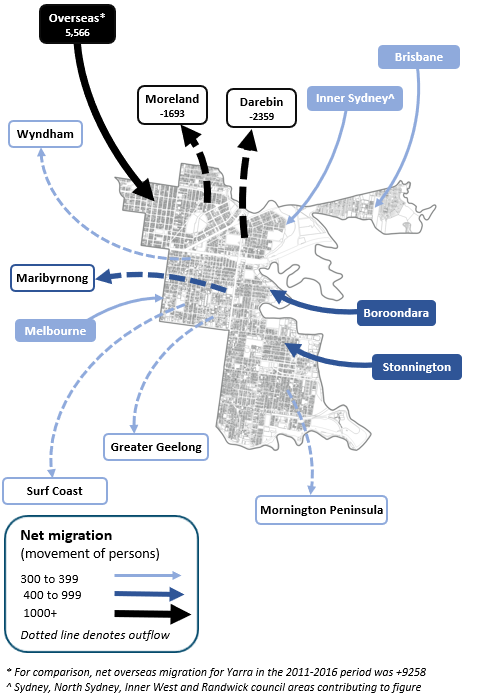 Reflecting the City’s development history, the dwelling stock in Yarra includes smaller ’heritage’ cottages, 1960s flat development, and contemporary apartment style housing including conversions from other uses. And around 10% of Yarra households are government housing tenants. The City has a significant portion of private rentals, and traditionally, tends to attract large numbers of young people, particularly those aged 18-24 years. The draw of younger people and associated household propensities is in some areas associated with the proximity of Melbourne University and RMIT, as well as to private education providers in the City. Carlton North - Princess Hill, Fitzroy, Fitzroy North, and Richmond are popular areas for student housing. In less central parts of the City, particularly Fairfield - Alphington and Clifton Hill, the amenity of areas tends to attract more mature families and families with children.

Affordability is a key influence on Yarra’s role and function - the process of gentrification in Yarra began in 1970s and 1980s and still continues. The value of land in the City has increased considerably and this influences the type of households that move to and stay in the area. For example, Carlton North - Princess Hill, Clifton Hill, and Fitzroy North were extensively gentrified some time ago and continue to attract higher income couple households. Price and dwelling size considerations mean that many family households and lower income households move out of Yarra, particularly for owner-occupied housing. At the same time, the accessibility of Yarra, along with lifestyle and job opportunities and the availability of both government and private rental housing, means that the City still gains migrants (for example, to North Richmond) and other diverse population groups.

With the high demand for dwellings across the City, there are significant differences in the supply of residential property within the City which will have a major influence in structuring different population and household futures over the next five to twenty years. The major source of additional dwellings and households in Yarra City is through larger redevelopment sites, including the reuse of prominent industrial and commercial sites. The identified supply of such sites means that this trend is expected to continue to be an important influence on Yarra’s housing market. Abbotsford, Central Richmond, Collingwood, Fairfield – Alphington and North Richmond are particularly influenced in the next 10 years, with significant dwelling additions expected in these areas that have considerable industrial and mixed use activity, both in continuing uses and in remnant buildings. New housing, generally for younger and higher income households, is increasingly important in the shifting profile of these suburbs. Similarly, medium and higher density development in mixed use and commercial areas is expected to continue to be important in Cremorne and Burnley - Richmond South, Fitzroy and Fitzroy North where light industry and commercial uses sit alongside older terrace housing and newer infill developments.

Powered by .id (informed decisions) for City of Yarra