Settlement in the Yarra Ranges Council area dates from the 1850s and 1860s as several small townships were established spurred by gold discoveries in the northern and eastern areas of the Council area. Early industries included forestry and grazing with the establishment of orchards and nurseries occurring in the 1880s and 1890s. Development of the area increased with the completion of the railway lines to Lilydale and Belgrave and continued steadily with significant development in the post-war years. The most rapid growth occurred during the 1970s and 1980s leading to the increased suburbanisation of the western areas of the Council area, significant growth occurred in permanent dwellings and the population of the area increased substantially.

The primary housing market role that the Yarra Ranges Council area has played in the post war period has been to provide home owning opportunities for two distinct markets - young family households and retirees, with the overwhelming demand from metropolitan Melbourne. There is continued demand for residential development within the Council area, catering for both people moving from closer to Melbourne and also new households being formed from within the existing population of the Yarra Ranges Council area. However, in the future, while several large residential development opportunities exist in the north west of the Council area, other areas are likely to lose population as the supply of detached dwellings is likely to limited over the next twenty years. 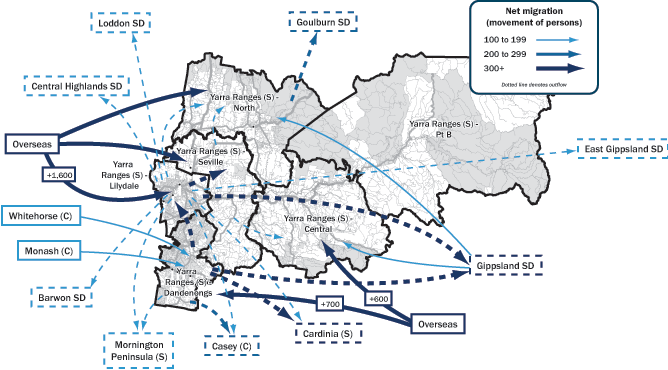 With the variety of residential areas, natural characteristics and period of development, different areas within the Yarra Ranges Council area have developed different roles within the housing market. The bulk of the areas attract a combination of families and retirees (and sometimes elderly) including Lilydale, Chirnside Park, Healesville & Surrounds, Yarra Glen & Surrounds and Yarra Junction - Millgrove - Wesburn. Launching Place - Woori Yallock - Don Valley and Seville - Seville East attract a large number of young adults as they have had more recent development when compared to other areas of the Council area. Kilsyth and Gruyere - Coldstream - Yering have a higher proportion of retirees. The variety of function and role of the small areas in the Yarra Ranges Council area means that population outcomes differ significantly across the Council area.

There are also significant differences in the supply of future residential land within the Council area which will also have a major influence in structuring different population and household futures over the next twenty-five years. Significant development opportunities have been identified in the designated activity centres of Lilydale, Chirnside Park, Kilsyth and Mooroolbark, which will generally take the form of medium density development. Other large development sites outside of the activity centres include at the Sibelco Quarry, Lilydale and the Cloverlea Estate, Chirnside Park. Belgrave - Selby, Belgrave Heights & Surrounds, Gruyere - Coldstream - Yering, Hilltop Towns, Kallista & Surrounds, Monbulk - Silvan and Warburton & Surrounds are expected to have limited residential development over the forecast period. Growth in households is also expected to come from the conversion of larger blocks to multi unit developments as well as the construction of new dwellings.