Wollongong City is located in the Illawarra Region of New South Wales, about 80 kilometres south of Sydney. Wollongong City is one of the most diverse local government areas in Australia, with a major Central Business District, substantial industrial and port functions, as well as large areas for residential use. Urban development stretches in a linear fashion away from central Wollongong along the coastal plain, between the Illawarra Escarpment in the west and the Tasman Sea in the east. The City encompasses a total land area of 714 square kilometres, including bushland, dams, cliffs and beaches. The escarpment is comprised largely of protected bushland, as there are also significant water catchment areas located here.

Wollongong is thought to be named from an Aboriginal word meaning "the sound of the sea". The original inhabitants of the Wollongong area were the Dharawal Aboriginal people. European settlement dates from 1816, when the first land grants were made. Land was used mainly for grazing, timber-cutting and agriculture, and later dairy farming. Gradual settlement took place in the 1820s and 1830s, with the township of Wollongong laid out in 1834. Coal mining was established in the late 1840s, with ten mines along the Illawarra escarpment by the 1880s. Villages grew up around the coal mines. The construction of the Illawarra railway line in the 1880s opened up the area for urban expansion. Steel manufacturing was established in 1926 at Port Kembla. For many years steel manufacturing was the defining characterisitic of the Illawarra economy. Economic restructuring in recent years has seen a general move away from this industry to a more service based economy (following national trends), but overall the steel industry is still very important to the local economy.

The most significant development occurred in the post-war years, aided by immigration and industrial expansion. The population grew rapidly during the 1960s and 1970s, rising from about 91,000 in 1954 to 165,000 in 1976. Growth slowed during the 1980s and 1990s, although the population reached 200,000 in 2010. A significant share of the recent growth has been from greenfield development in Horsley, Figtree, Balgownie-Tarrawanna-Fernhill, Cordeaux Heights-Mount Kembla- Kembla Heights, Woonona-Russell Vale, and more recently, medium and high density dwellings in central Wollongong. Population growth is expected to continue as the urban area expands west of Dapto and Horsley (West Dapto Release Area), coupled with continuing development of high density apartments and student accommodation facilities in and around the CBD. 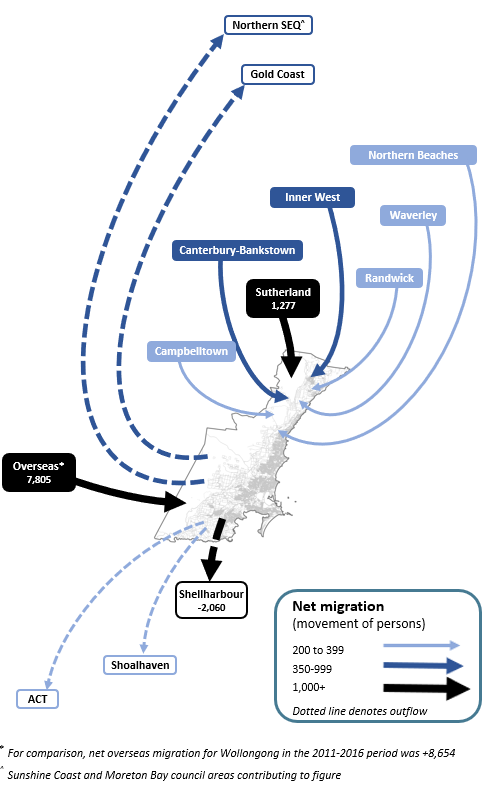 The primary housing market role that the City has played in recent decades has been to provide housing for people from overseas and from areas along the South Coast, many of whom are students and young people, as well as upgrade opportunities for second and third home buyers in the foothills areas and along the northern coastal strip. By contrast, the City has tended to lose young couples and families to Shellharbour and to Queensland. This housing market role is expected to continue in the future, although the large new greenfield opportunities in the West Dapto area and comparatively less supply in Shellharbour City means the loss of young couples and families is likely to slow.

With the varied development phases, the overall size of the municipality and the different housing types, areas within Wollongong City have developed different roles within the housing market. The areas around the City and Wollongong University such as Wollongong, West Wollongong, North Wollongong, Gwynneville, Fairy Meadow and East Corrimal tend to attract young adults in their late teens and early twenties, attracted to the services and facilities of the CBD or seeking accommodation opportunities close to the University. Northern coastal areas and foothill areas tend to attract young or established families. Areas such as Horsley have been developed for residential purposes in more recent years and are attractive to couples and families seeking new housing opportunities. There are a number of areas in Wollongong City that attract retirees or older persons due to the high percentage of housing stock as retirement villages or aged care. These areas include Corrimal, Dapto-Penrose-Brownsville, Farmborough Heights, Kanahooka, Towradgi, Unanderra-Kembla Heights and Windang-Primbee. These variations in role and function mean that population outcomes differ significantly across the City.

Population and household outcomes also differ depending on the availability of future residential supply. The major source of greenfield supply is in the West Dapto Release Area (Horsley, Kembla Heights, Avondale - Cleveland, Dombarton - Wongawilli - Huntley and Marshall Mount - Haywards Bay - Yallah), which started developing in 2013. Continued demand for apartment living in and around the CBD will cater for the growth of smaller households, particularly students and young adults. Within the established suburban areas, there are a number of strategic development sites, most notably at Bulli, Thirroul, Figtree and Fairy Meadows, that will influence growth in the short to medium term. Overall, the City is forecast to reach a population of 278,800 at 2041.