The City of Whittlesea went through its first rapid growth phase during the 1960s, with the development of many suburbs at the southern end of the local government area, notably Bundoora, Thomastown and Lalor. The primary housing market role that the City of Whittlesea played during this period was to provide home owning opportunities for families and prospective families from the northern suburbs of Melbourne.

The importance of the City of Whittlesea within the northern suburban housing market of Melbourne has continued and has heightened over recent years. More than a dozen professional developers are now active in the City, which has resulted in much greater supply levels than before.

There is significant pressure for residential expansion within Whittlesea from both existing residents (especially southern suburbs, such as Thomastown, Lalor and Bundoora) and from migrants, most notably from overseas, as well as areas to the south and south-east (especially the City of Darebin).

Until recently, there had been significant outflows from the City of Whittlesea to ’competing’ developments in Craigieburn and Roxburgh Park to the west and north west, as well as flows to rural and rural residential areas to the north (Mitchell Shire). These flows to the Hume Corridor have reversed in the last few years, as residential opportunities have been exhausted in Roxburgh Park and new development fronts have been established in the City of Whittlesea catering for a range of markets. 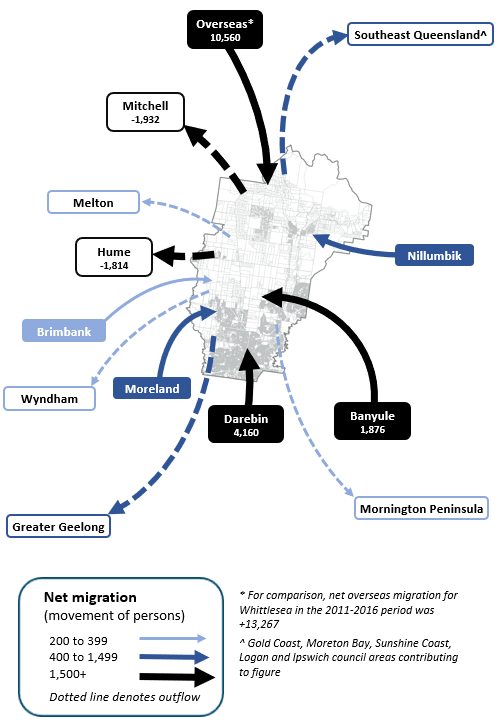 With the progressive residential development of the City over many decades, the large size of the municipality and the broad range of land uses across the City, areas have developed different roles within the housing market. Areas such as Epping North, Mernda - Doreen and South Morang have had significant residential development in more recent years and are attractive to couples and families seeking new housing opportunities. Blossom Park is attractive to mature families looking to upgrade to their second and third home while Mill Park has experienced losses in most age groups as it’s development cycle ended.

Bundoora, Epping, Lalor and Thomastown tend to attract more young adults (18-24 years), due to the range of services in the area, proximity to public transport, as well as rental accommodation. This variety of function and role of the small areas in the City of Whittlesea means that population outcomes differ significantly across the municipality.

There are also significant differences in the supply of residential land within the City which will also have a major influence in structuring different population and household futures over the next five to twenty years. The major source of additional dwellings and households in the City will be in ’greenfield’ opportunities that are ongoing in Epping North, Doreen and Mernda as well as in the new urban areas of Wollert and the Donnybrook. A large amount of development is also expected around pre-existing major centres of the City (Epping, Lalor and Thomastown) and in strategic sites such as University Hill (Bundoora) and the Plenty Valley Town Centre (South Morang), with greater densities and more apartment construction.

Powered by .id (informed decisions) for City of Whittlesea