Wellington Shire is in eastern Victoria’s Gippsland region and is the State’s third largest LGA. The LGA encompasses a diverse range of land uses and landforms. The northern parts are remote and densely forested, rising from the Latrobe Valley into the mountains of the Victorian Alps, some of the highest peaks in Australia, with some parts used for timber production. The main population centres are generally located in the central fertile flood plains surrounded by land that is mainly used for grazing and agriculture. To the south, there are small coastal settlements, with both long term and short-term residents. These diverse natural features are fundamental in shaping the development of the Shire.

European development of Wellington Shire began when Port Albert was established in 1841. One of the first ports established in Victoria, Port Albert was a key transport link for timber and during the gold rush for mining, as traversing across the greater Gippsland marshes was difficult at the best of times (Melbourne to Rosedale would take 33 hours!). Development was slow until 1880’s due to the restricted transport options and limited private land releases. This changed from late 1870’s to the 1890’s when train lines were built out to Sale and Port Albert, connecting towns such as Cowwarr, Heyfield & Briagolong. This gave farmers and timber producers in the area the chance to send their produce to Melbourne more easily and thus made the area attractive to new residents, who would migrate to these developing service towns for economic opportunities. Development would continue to be concentrated in these towns for the next few decades. From the 1950’s development opened up along the coast as holiday homes became popular for Australia’s growing middle class.

The attraction of the region’s natural amenity acts as one of the main drivers for population growth, particularly for sea changers. There is a dual housing market in operation, consisting both of retirees and families. The Shire gains population through migration from outer Eastern & South Eastern Melbourne, yet loses locally to neighbouring LGAs, such as La Trobe, East Gippsland, and Baw Baw. In common with most parts of regional Australia, Wellington loses young adults to Melbourne for education, employment and lifestyle reasons. 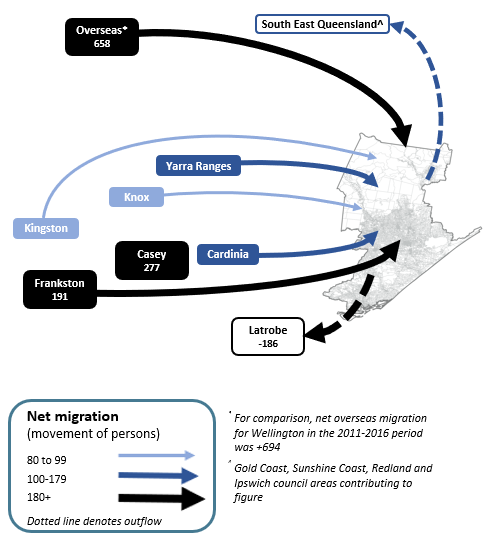 The largest town Sale, has a significant regional centre function with a variety of services (high schools, TAFE, hospitals, local and state government) serving the entire Wellington area. The East Sale RAAF base is a major feature of the area. It is a major training centre for the Air Force. Resultant defence industries and health care are major employers. Major agricultural centres of Maffra (second largest town in Wellington, with about 6,000 people), Stratford, Heyfield and Rosedale are situated in the Central Gippsland plains, along the Avon and Latrobe Rivers, and are mainly service centres for the surrounding rich farmland. Wellington’s natural amenity encourages tourism to the region. The Ninety Mile Beach stretches from Port Albert to Lakes Entrance (in East Gippsland Shire), and the towns along this stretch are smaller and characterised by a high rate of holiday homes which are generally unoccupied on Census night but fill up over summer. These towns include Loch Sport, Golden Beach and Seaspray.

Future growth in Wellington is likely to occur in the main towns, particularly the northern part of Sale, where there is considerable residential supply and existing services. Rural residential development around Maffra and Longford, is another important source of future supply for those seeking rural lifestyle opportunities within easy access of a major regional centre. This is anticipated to increase over the course of the forecast. Minimal growth is forecast for the more remote rural areas, continuing the trend of stable population change. Overall, the population is forecast to grow from around 43,532 in 2016 to 57,855 in 2041.