Warrnambool City is located along the Great South Coast in Victoria’s South-West, about 260 kilometres from Melbourne. Warrnambool is the largest urban centre in the Region and is the main service centre for retailing, business services, health and education. About 25% of the City’s workforce is employed in wholesale and retail trade, with a further 30% employed in education, health, community and business services. Tourism is also a notable employer in Warrnambool, with the City attracting many people to its beaches during the warmer months, as well as whale spotting during the winter months.

Manufacturing was formerly the largest employer in Warrnambool, with clothing production highly significant due to the Fletcher Jones company. However, like many areas in Victoria, major decreases in manufacturing jobs were recorded since the mid-1970s, especially in the clothing, textiles and footwear industry. In recent years, manufacturing jobs have been on the increase again, with large investments to dairying plants in and around the City (Dennington, Allansford and Koroit) which have resulted in overall gains in employment. The City is the major source of employment for its residents, as well as other areas in the South-West of Victoria, most notably Moyne Shire. As a consequence future changes to population in the City, as well as neighbouring areas, will be associated with employment growth or decrease.

The population of Warrnambool City has increased significantly over the last twenty five years, albeit with growth varying slightly from period to period. The dominant drivers for population gain during these periods were:

The dominant drivers for population loss during these periods have been:

It is assumed that a number of these patterns will continue into the future, most notably flows into the City from overseas and losses of young people to larger centres, albeit in lower numbers. It is likely that this may result in a bit of a reversal with Warrnambool City gaining from Metropolitan Melbourne.

Overall, employment factors will have a strong bearing on population in the next fifteen to twenty years in Warrnambool City. Recent development of various industries around the City such as gas production in the Otway Basin, wind farms and timber production are likely to maintain strong employment growth in Warrnambool. This is due to the fact that the City will benefit from expenditure and further growth and enhancement of its service functions. 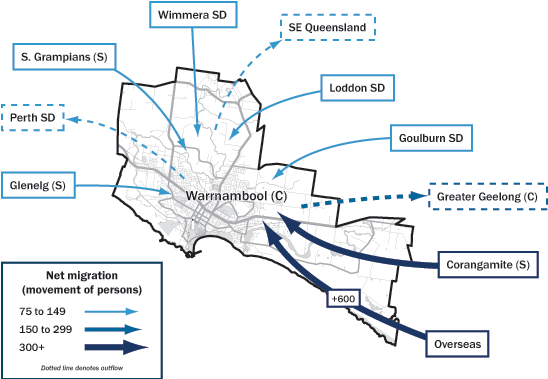 Within the City of Warrnambool as a result of the progressive residential development of the City over a century, the diverse demand for housing, the range of land uses and varying planning policies, areas have developed different roles within the housing market. Warrnambool (Central) attracts a large number of persons in their late teens and twenties, which is a reflection on the more ’inner urban’ nature of the area with significant rental stock and access to restaurants and entertainment. Areas such as Warrnambool (North East), the Dennington area and Warrnambool (South - Merrivale) tend to attract families, while Warrnambool (North of Merri) is expected to assume this role in the future. The more rural areas of Allansford - Rural East, Bushfield-Woodford and Warrnambool (South East - Hopkins) tend to attract a greater share of established and mature families, looking to upgrade to their second and third home. Established areas with minimal recent development such as Warrnambool (Botanic), Warrnambool (East - Racecourse) and Warrnambool (North) have lost population in most age groups over the last 5 years. This variety of function and role of the small areas in Warrnambool City means that population outcomes differ significantly across the municipality.

There are also significant differences in the supply of residential property within the City which will also have a major influence in structuring different population and household futures over the next five to twenty years. Large new ’greenfield’ opportunities have been identified in Warrnambool (North East), Dennington, Warrnambool (North of Merri) and Warrnambool (South East - Hopkins). Other residential developments are also likely to occur in Warrnambool (East - Racecourse), Warrnambool (West) and Warrnambool (South - Merrivale) where large pockets of residual greenfield land remain. There are likely to be other greenfield, infill and rural residential development opportunities throughout the City, albeit at lower levels than the major growth areas identified above.