The City of Wanneroo is a relatively diverse municipality in terms of its land use and economic base. It features a mixture of residential, industrial and commercial activities in the south of the City, around the old township of Wanneroo and along the coastal strip north of Joondalup. The rural hinterland to the north and east boast significant amounts of intensive horticulture, some broadhectare agriculture, quarrying and natural heritage areas, as well as semi-rural and rural-residential living.

The development of high-value horticultural and other intensive rural industries, such as poultry farming, comprised much of the impetus for the moderate population growth experienced in the City during the first half of the twentieth century. In recent decades, however, there has been substantial population growth in the City, which is directly related to the expansion of the northern and north-western suburbs of Perth, incorporating many of the southern parts of the City into the contiguous urban area of Perth. This is a process set to continue and heighten into the future with the City of Wanneroo becoming the primary focus for residential development in the northern suburbs of Perth. This is in part related to the lack of new residential opportunities in the City of Joondalup, which had previously been the major development focus area in the north-west over the last twenty-five years

The reason for population and household growth in the City of Wanneroo can be attributed to several sources. These include the large number of young adults leaving home within the region (notably in areas to the south, such as the Cities of Joondalup, Stirling and over time Wanneroo itself) seeking to establish new households and families. It also includes the substantial net overseas and to a lesser degree interstate migration gains to the region. The City is also likely to play a role as a lifestyle destination, with many opportunities for coastal and rural living in northern areas, especially in Two Rocks and Yanchep. This should provide for a more diverse range of housing markets in the City, with first home buyers, families upgrading to second and third homes, as well as empty-nesters and retirees looking for a new lifestyle. 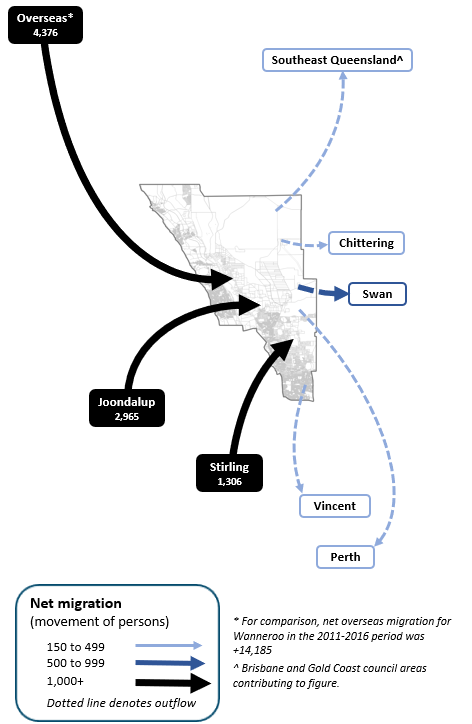 With the varied development phases, the overall size of the municipality and the different housing types, areas within the City of Wanneroo have developed different roles within the housing market. Areas such as Landsdale, Butler, Clarkson, Carramar and Banksia Grove have been developed for residential purposes in more recent years and are attractive to couples and families seeking new housing opportunities. The rural areas of the City are attractive to mature families looking to upgrade to their second and third home and in most cases seeking a rural environment and lifestyle. Two Rocks and Yanchep are areas that appeal to both families and empty-nesters/retirees. Some of the established areas of the City, such as Girrawheen and Koondoola provide more affordable housing options. Some areas have also changed their role in the housing market in recent years, with Quinns Rocks moving from a holidaying destination to an established family suburb and Darch, Madeley - Wangara - Woodvale and Hocking-Pearsall shifting from market gardens to new housing estates.

Changes in the housing market role of Wanneroo and Gnangara - Jandabup - Mariginiup are also expected with the introduction of new greenfield land under the East Wanneroo Structure Plan, while the formally vacant areas of Alkimos and Eglinton are experiencing their first great surge of population growth in their history. This variety of function and role of the small areas in the City of Wanneroo means that population outcomes differ significantly across the municipality.

There are also significant differences in the supply of residential property within the City which will also have a major influence in structuring different population and household futures over the next five to twenty years. Large new ’greenfield’ opportunities are currently being constructed or have been identified in many of the coastal areas such as Alkimos, Butler, Clarkson, Eglinton, Jindalee, Two Rocks and Yanchep.

Areas east of Wanneroo Road, such as Ashby - Sinagra, Banksia Grove, Carramar, Darch, Hocking - Pearsall, Landsdale, Madeley - Wangara – Woodvale and Tapping will soon have supply exhausted, however land designated under the East Wanneroo Structure Plan in Wanneroo, Gnangara - Jandabup – Mariginiup and Neerabup – Pinjar – Nowergup will be sufficient to meet expected demand. There are likely to be other greenfield, infill and residential redevelopment opportunities throughout the City, albeit lower than the major growth areas identified above.

Powered by .id - the population experts for City of Wanneroo