The Town of Victoria Park is located in inner Perth, on the southern side of the Swan River across from the CBD. It is primarily a residential area, but with concentrations of commercial activity along the major arterials (particularly Albany Highway), as well as industrial areas in Burswood and Welshpool. However there are areas with distinctive characteristics, such as Burswood. Primarily located on a peninsula on the Swan River, the suburb consists of Crown Perth, associated entertainment facilities and the new Perth Stadium. Another suburb with a distinctive profile is Bentley, located in the south west of the Town. Bentley, located in the south west of the Town, is home to Curtin University and its associated student accommodation facilities, as well as a concentration of aged care accommodation and the Bentley Technology Park.

Settlement in the area dates back to the mid nineteenth century, but the construction of a road crossing across the Causeway later in the nineteenth century opened up the area for suburban development. This was further facilitated by the opening of the Armadale train line from the 1890s, which traverses the eastern suburbs of the Town. The older suburbs are generally in the north (most notably Lathlain), but after WW2 development spread outwards in a southerly direction and away from the train line. Throughout the 1980s and 1990s, population growth was modest, but with the construction of more high density apartments since 2005 the growth rate has increased. In 1991, the population was 25,300, increasing to 27,750 in 2001 and 36,640 in 2016. 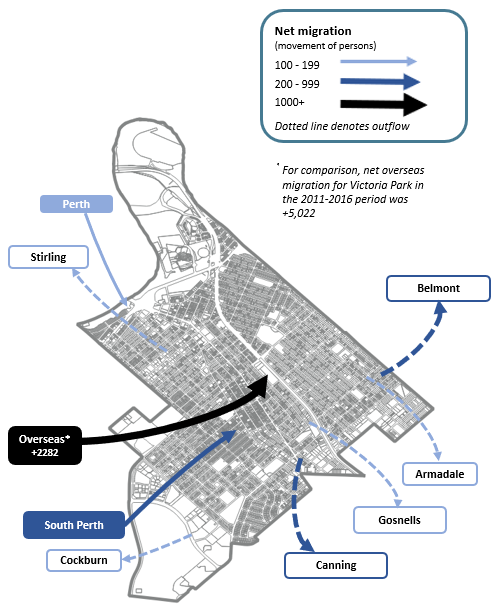 The Town’s location in inner Perth means that it is an established part of the urban fabric. Consequently, future development opportunities are dependent on the availability of strategic sites, opportunities for infill, as well as Transport Oriented Developments (TOD). Constraints on infill development include heritage areas as well as the fact that large parts of the Town, particularly east of Albany Highway, have already undergone significant amounts of infill development. Significant development opportunities have been identified in Burswood, consisting largely of medium and high density apartments, both on the Burswood Peninsula and in the Causeway Precinct. Opportunities for infill and further intensification along the Albany Highway are also assumed in Victoria Park and East Victoria Park - Kensington, though these developments are and will be on a smaller scale than those proposed in Burswood.

Powered by .id (informed decisions) for Town of Victoria Park