Sutherland Shire is located in the outer southern fringe of Sydney, about 26 kilometres from the Sydney CBD. The Shire includes established residential areas between the Georges River and Port Hacking and the Royal National Park in the south. The Shire was historically occupied by the Gweagal people of the Dharawal clan. The Gweagal people inhabited the saltwater bays and estuaries of Port Hacking, the Kurnell Peninsula and the upper Hacking and Woronora Rivers.

The Shire was the landing place of Lieutenant (later Captain) James Cook who anchored his ship the Endeavour in Botany Bay in 1770. It was this voyage the provided the impetus for the British settlement of Australia in 1788. While there was some farming settlement in the Shire from the 1820s, it wasn’t until the 1850s that Crown land sales commenced and encouraged settlement. Significant settlement of the Shire did not commence until the coming of the main southern railway in the 1880s. A station was established at Sutherland in 1885 and soon vehicles were providing access from the station to the beaches at Cronulla.

At the time the Shire was proclaimed in 1906, there were 1,600 ratepayers. A steam tram service from Sutherland to Cronulla began in 1911 encouraging development in the central area of the Shire. Between 1911 and 1931, the Shire’s population increased from 2,900 to over 12,000. The opening of the railway to Cronulla inspired enormous growth in the immediate post war period, with the Shire’s population increasing from around 29,000 in 1947 to 112,000 in 1961. Growth has continued at a steady rate in the Shire as new dwellings have been added, many of them higher density forms of development.

Historically, the Shire has provided home owning opportunities for residents of the southern suburbs of Sydney. In the 2006-2011 period, the Shire attracted large numbers of persons from overseas as well as neighbouring areas closer to central Sydney across the Georges River in the St George area as well as the Bankstown area. The Shire experienced a net loss of persons to neighbouring Wollongong City and like many areas of Sydney, it loses people in net terms to south east Queensland..

The Shire also produces significant numbers of new households from within its own population, many of whom are looking for housing opportunities within the local area. Many of the 1980s and 1990s areas in the west of the Shire, have older children leaving home and looking to establish new households. 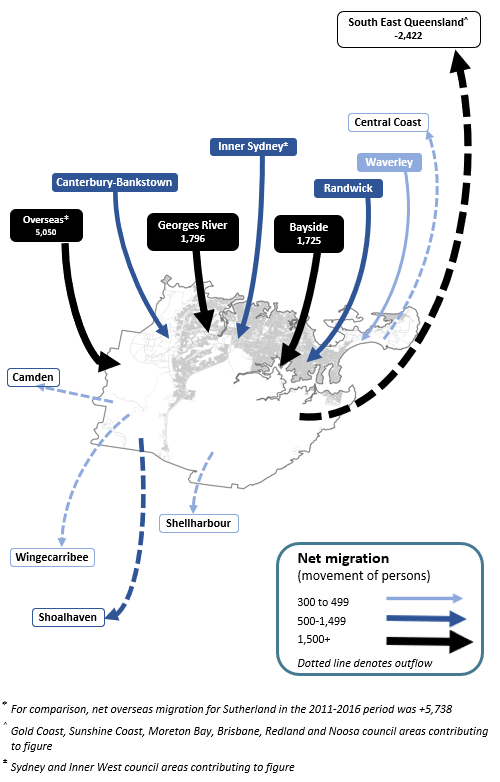 Future levels of population growth in Sutherland Shire are driven by demand of new households within the Shire, from overseas and from the southern suburbs of Sydney. The Shire has significant potential for the intensification of centres along the Cronulla and southern rail corridors. These areas are expected to attract young adults seeking access to transport, services and recreation. The western parts of the Shire and suburbs closer to the Georges River and Port Hacking are traditionally more attractive for older families and tend to lose young adults that are forming new households. The Shire also provides an attractive natural waterfront aspect that will continue to attract new households seeking a coastal lifestyle.

Sutherland Shire is a large and diverse Local Government Area. The Shire features large established areas, lower density 1980s and 1990s suburbs, high density coastal areas, and areas with significant natural features. Each of these areas plays a different role in providing future housing opportunities. Significant development potential in rail based activity centres has been identified in Caringbah, Miranda, Cronulla, Sutherland and Kirrawee. There is also a number of major redevelopment sites providing significant numbers of dwellings over the forecast period. These include Kirrawee Village, Woolooware Bay and Greenhills Beach. The west of the Shire has a number of smaller greenfield development areas. By contrast, many areas of the Shire, particularly the suburbs fronting the Georges River and Port Hacking are assumed to have relatively few new dwellings added over the forecast period. Overall, more than 17,800 dwellings are assumed over the period 2017-36, resulting in a population of 266,000 at 2036.

Powered by .id - the population experts for Sutherland Shire Council