The Surf Coast Shire encompasses a diversity of rapidly changing communities ranging from small coastal hamlets and sparsely populated rural communities to larger coastal towns. The Shire is located in south western Victoria between 10 and 60 kilometres south west of Geelong. The southern part of the Shire consists of a linear pattern of coastal townships including Torquay, Jan Juc, Anglesea, Aireys Inlet, Fairhaven and Lorne. With the exception of Torquay and Jan Juc, these townships are sited on the coastal edge of the Otway Ranges and are surrounded by large areas of national and state park, restricting the potential for outward growth. North of the ranges is large rural community with population centres at Winchelsea, Moriac and Deans Marsh.

Early development in the Shire dates from the 1850s, with the establishment of a township at Winchelsea. Various settlements along the coast originated in the 1880s and 1890s, established primarily as timber-getting and fishing centres. Access to these settlements was difficult until the opening of the Great Ocean Road in the 1920s. The Great Ocean Road enabled access to towns such as Aireys Inlet, Fairhaven and Lorne and these areas developed as tourist centres, particularly with the advent of private vehicle transport. The Shire has experienced significant growth from the 1980s onwards. This has generally been focussed in the Torquay-Jan Juc area, a result of the area’s lack of physical constraints and access to Geelong (particularly after the duplication of the Surf Coast Highway). Population growth in the Shire has in part been driven by the increase in occupancy over the last twenty years as holiday houses have been converted to permanent occupancy. The Shire continues to accommodate significant numbers of tourists, particularly in summer, when the population generally doubles in size.

The primary housing market role that the Shire played over this period has been to attract young families and retirees. Significant development in the Shire is expected to continue, dominated by new growth areas in Torquay, particularly to the north and west of the town. This is based predominantly on two factors. The first factor is the attractiveness of a coastal lifestyle to young families from Greater Geelong and Melbourne. The second factor is the significant demand from retirees from Melbourne and Geelong. This market can be expected to increase significantly as the ‘baby boomer’ generation reaches retirement age. 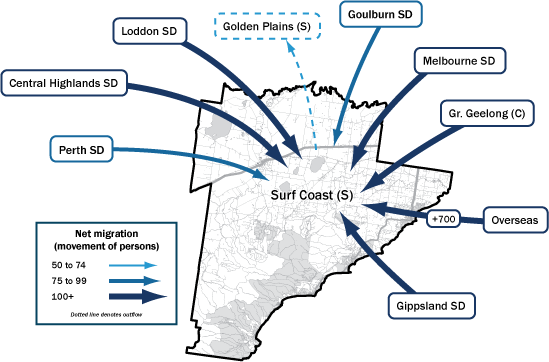 The Shire comprises significant diversity in terms of residential and economic role and function. Areas such as Lorne, Aireys Inlet, Fairhaven and Anglesea have large numbers of dwellings that are only occupied part time. These areas are generally outside commuting distance to major employment centres in Geelong and Melbourne, and it assumed that much of their future demand will come from people in the retiree age groups. Winchelsea and Moriac are more traditional rural service centres with good access to Geelong and are expected to slowly increase in population as coastal areas become less affordable. These areas will continue to lose young adults (18-24 year olds) seeking employment, educational and lifestyle opportunities closer to Geelong or Melbourne. Torquay and Jan Juc have more of a ‘suburban’ role in attracting young families, their access to employment in Geelong a key attribute. This variety of function and role of the small areas in Surf Coast Shire means that population outcomes differ significantly across the municipality.

There are also significant differences in the supply of residential property within the Shire which will also have a major influence in structuring different population and household futures over the next five to twenty years. Large new ’greenfield’ opportunities have been identified in Torquay and as a result, this area will dominate population growth in the Shire over the forecast period. All areas are expected to increase in population to some extent, driven by some residential development, and in the case of the coastal areas, an increase in the number of dwellings occupied permanently.