The City of Subiaco is located in Perth’s inner western suburbs, about three kilometres west of the Perth GPO. The City is an established, residential, recreational, educational and commercial municipality with a diverse range of housing stock and residential neighbourhoods.

Early development in the area commenced in the late 1830s, within a decade of European settlement of Perth. Population was minimal until the 1850s and the first expansion period coincided with the expansion of Perth’s inner suburbs in the 1880s and 1890s around the time of the gold rush in Kalgoorlie. The construction of Western Australia’s first railway from Perth to Fremantle in 1881 encouraged residential development in the western suburbs of Perth as it enabled easy commuting to employment in central Perth. The next significant period of growth in Subiaco was the inter-war era which was responsible for a significant proportion of the City’s housing stock.

The City is a significant employment area; it contained around 30,000 jobs in 2011 (compared to 10,000 resident workers - 2011 boundaries). More than half of the jobs in the City in 2011 were in the Health Care and Social Assistance, Professional, Scientific and Technical Services and Education and Training sectors. Facilities such as the Princess Margaret Hospital for Children and King Edward Memorial Hospital for Women provide significant numbers of jobs. The large majority of working residents of the City work elsewhere however, with nearly 29% commuting to the City of Perth for employment.

In general terms, the City attracts a young adult population to most areas. This includes significant numbers of new residents from overseas, many of these tertiary students. For non-students, the City is also attractive due to its access to employment in central Perth, lifestyle and entertainment and access to rental accommodation. Many of these young adults leave the City in their late 20s and early 30s to access more affordable and larger housing when the time comes to purchase a dwelling or start a family.

It is generally assumed that most of these broad patterns will continue into the future, most notably a high level of demand for living in the City which generally cannot be fully catered for due to constraints in providing new residential dwelling stock. The direct result of this is some outflow of young adults to areas where more new housing opportunities are being provided, chiefly to the north. 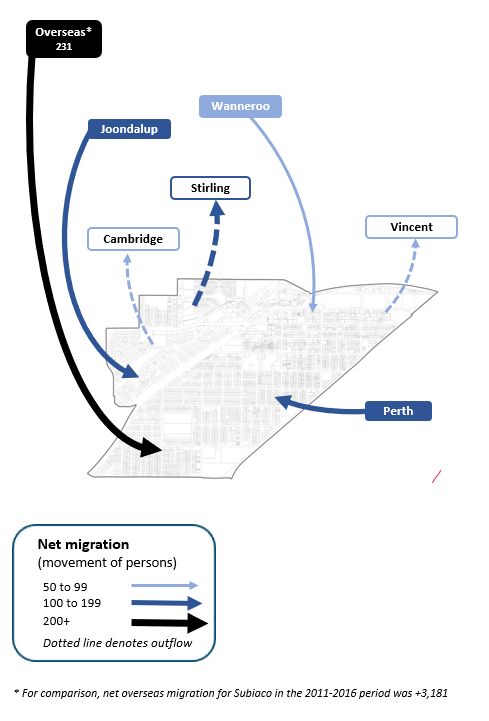 While attracting generally similar housing markets, there are some important distinctions in the small areas of the City. The Jolimont and Shenton Park areas are influenced by the location of students in private rental accommodation and this has a significant effect on the age groups of persons moving into and out of these areas. Subiaco (North) and Subiaco (South) are more influenced by young employed adults moving to the area for its attractiveness and inner city location. This is a similar pattern to many inner city areas around Australia.

The Subi Centro area includes a major urban renewal project involving redevelopment of former industrial and railway land. While the market moving to this area is also dominated by young adults, it is also expected that large numbers of persons in their 40s and 50s (typically empty-nesters) are attracted to the area. This variation of function and role of the small areas in the City means that population outcomes differ accordingly.

Powered by .id (informed decisions) for City of Subiaco