The South West Group is located to the south west of the Perth CBD, and comprises six local government areas – the Cities of Cockburn, Fremantle, Kwinana, Melville and Rockingham, and the Town of East Fremantle. It is bounded by the Town of Mosman Park and the Swan and Canning Rivers in the north, the Cities of Canning and Armadale and the Serpentine Jarrahdale Shire in the east, the Shire of Murray and the City of Mandurah in the south, and the Indian Ocean in the west. It has a diverse range of land uses and covers established, maturing and growing parts of the Perth metropolitan area. There are substantial tracts of land devoted to maritime and heavy industrial functions, particularly around Fremantle and Kwinana. Residential areas include the established suburbs around Fremantle, to the newly developing suburbs of Baldivis and Keralup on the southern metropolitan fringe.

European settlement dates from 1829 when a port was established for the Swan River Colony at Fremantle. Gradual growth took place during the mid 1800s, with more rapid growth from the late 1800s into the early 1900s, spurred by the opening of the railway line from Perth and the gold rush. Land was used mainly for farming, market gardening and orcharding, with some fishing and shipping. Significant residential development occurred from the post-war years, particularly from the 1950s, accompanied by industrial growth. Rapid growth took place in the southern areas from the 1980s, and continues to this day. The population of the region increased from about 234,760 in 1991 to about 373,380 in 2011. About three quarters of the growth between 1991 and 2011 occurred in the Cities of Cockburn and Rockingham.

Migration patterns within and to/from the South West Group are typical of those found in major Australian cities. There is a dominance of local moves, as evidenced by the strong flows between neighbouring LGAs. There is also a strong movement outward in a sectoral direction, whereby LGAs further south typically gain new residents from those closer to the CBD. For example, Kwinana gains significant population from Cockburn, Fremantle and Melville.

In terms of flows in and out of the SW Group, there is a predominance of moves to and from other parts of the Perth metropolitan area, particularly LGAs south of the Swan River. Between 2006 and 2011, the SW Group gained significant population from neighbouring Gosnells, as well as Joondalup and Stirling. The most significant outflows in this period were to neighbouring Serpentine-Jarrahdale and Mandurah, as well as further south to Murray and Busselton. 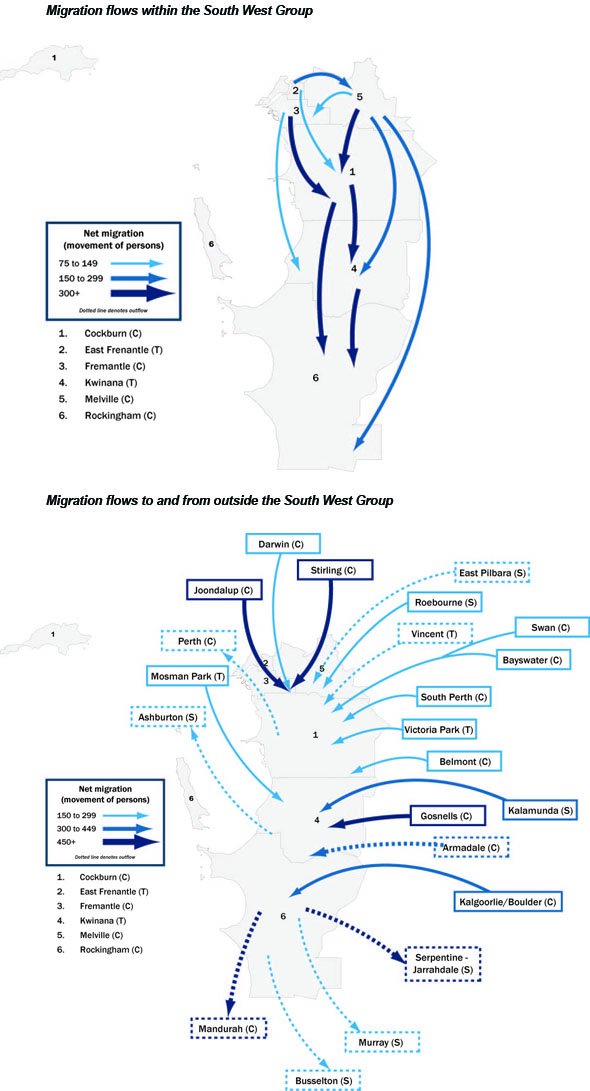 The size of the South West Group, the diversity of land uses and development over many decades, all influence the housing market role and suburban life cycle stage. In a general sense, the South West has provided housing opportunities for families, and as the transport infrastructure has improved, new areas for development have opened up as the metropolitan area has expanded southwards. Employment in the maritime and heavy industry sectors has also influenced the housing market role as people have been able to live close to their place of employment, rather than commuting into central Perth.

The expansion of the Perth metropolitan area further southwards over the decades has resulted in considerable diversity in the suburban life cycle stage. Greenfield developments on the fringe, particularly in Kwinana and Rockingham, are attractive to young families seeking relatively affordable home owning opportunities. More mature suburbs, which occur across all six LGAs, have stable and even declining populations as family households decline in number and the population ages. In some areas, opportunities for infill development in the form of medium and high density development attract young adults, particularly where they are located close to education facilities or have a lifestyle amenity factor. Examples of this include Fremantle and parts of Cockburn.

There are significant differences in the supply of residential land that will have an influence on population and household futures over the 2011-2036 period. Again, this relates to the diversity of land uses and urban development over many decades. More than 105,000 dwellings have been assumed over the period 2016-2036. Significant land supply has been identified in Rockingham (34,714 dwellings) and Cockburn (32,560 dwellings), which include a mix of greenfield and strategic development sites. In contrast, smaller councils such as Fremantle, which have important tourism and economic functions, rely on strategic infill developments and conversion of land uses to residential in order to accommodation dwelling growth. Overall, the population of the South West Group is forecast to reach more than 637,000 at 2036.