Shellharbour City is located in the Illawarra region of New South Wales, about 100km south of Sydney. It is bounded by Lake Illawarra and Wollongong City in the north and the Municipality of Kiama in the south. Urban development has been traditionally confined to the coastal strip, with the Illawarra escarpment forming a natural boundary to westwards expansion. Urban development in Shellharbour is contiguous with Wollongong, and in terms of its role and function it has a strong relationship with the larger regional centre. Rural uses are largely located inland and include agricultural and extractive industries.

The Illawarra escarpment is a significant topographic feature which prevents westward expansion of the urban area, particularly in Wollongong. In more recent decades, the role and function of Shellharbour has been to supply greenfield land for the wider Illawarra region. This has resulted in signficant growth and urban expansion, particularly to the west (Albion Park, Calderwood) and south (Flinders and Shell Cove). Population growth rates in Shellharbour have been consistently above the average for the Illawarra region because of the in-migration of young families and couples. They are attracted to the region due to relatively affordable housing, employment opportunities in nearby Wollongong, and the coastal location. 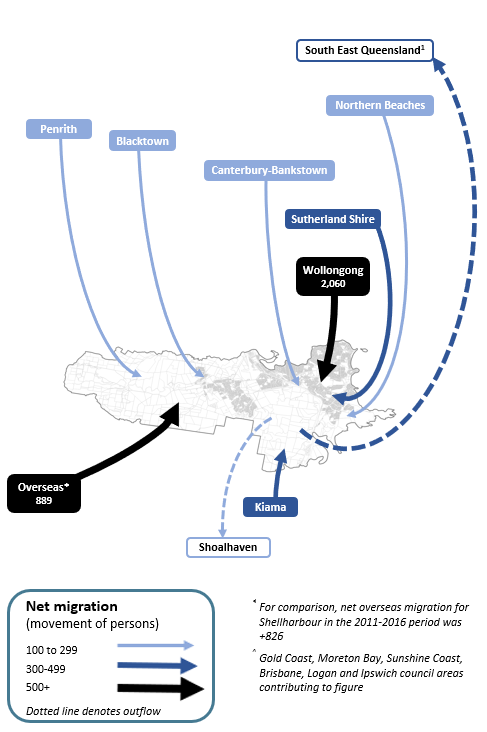 The second housing market consists of suburbs with greenfield and larger redevelopment sites that attract family households and other "niche" markets such as retirees. These include Shell Cove, Calderwood, Albion Park (Tulimbar part) and Blackbutt - Shellharbour City Centre. In greenfield areas the age profile will typically be much younger than established parts of Shellharbour due to the predominance of young families in the migration profile.

There are significant expansions to the supply of residential land within the City that will influence population and housing outcomes over the forecast period. Large greenfield opportunities that have been identified in the Calderwood and Tullimbar estates have commenced supplying housing. There is also significant supply in Shell Cove (including the Boat Harbour/Marina) and to a lesser extent, Albion Park. In contrast, new residential growth in the established suburbs will primarily be realised through infill development and small scale subdivisions. Despite these differences in residential supply, the overall result for Shellharbour City is growth and a forecast population of 103,000 at 2041.