The City of Salisbury encompasses a range of residential, industrial and non-urban areas. The City is located in northern Adelaide generally between 15 and 25 kilometres north of the Adelaide GPO. The central and western parts of the City consist of a range of residential and commercial suburbs as well as the Parafield Airport, which functions as Adelaide’s major general aviation facility. In the west of the City are large non-urban areas comprising uses such as the Bolivar Sewage Treatment Works, Globe Derby Park harness racing facility and salt crystallisation pans. In the City’s north are the Edinburgh RAAF Base and the Defence Science and Technology Organisation.

The oldest part of the City is the Salisbury area with original subdivision commencing in the 1840s. Early development in the City dates from the 1850s, with the establishment of a township at Salisbury and construction of a railway line. The post war period saw the significant amounts of both employment and residential development in the City. During the 1950s, 1960s and 1970s the South Austrlaia Housing Trust constructed a large number of new homes in the City. New housing development has continued through to the present day, with Mawson Lakes the most recent growth hotspot.

The primary housing market role that the City has played over the post war period has been to provide affordable housing for young families in northern Adelaide. In the last ten years, the City has catered to a broader range of housing markets, with Mawson Lakes in particular providing a range of dwelling types, and this has resulted in a migration profile focussed on young adults rather than family groups. The City displays migration patterns typical of Australian cities, with new residents coming from areas closer to the CBD (particularly Port Adelaide-Enfield and Tea Tree Gully), and a loss of population to the City of Playford futher north. 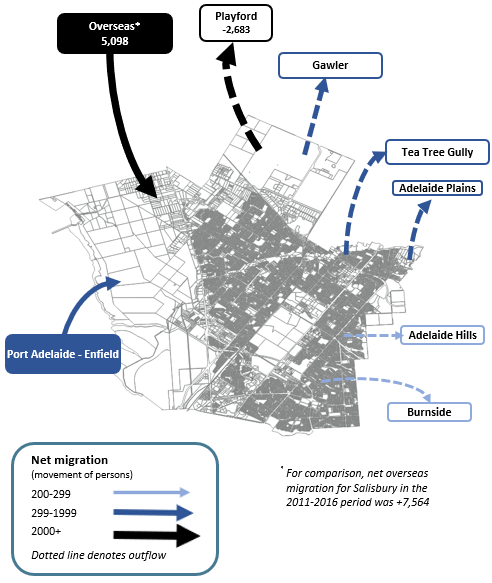 With the progressive residential development of the City over many decades and the large size of the municipality, areas have developed different roles within the housing market. Many parts of the City, particularly those with affordable rental stock near public transport and education facilities, tend to attract young adults. This is particularly true of Mawson Lakes, Salisbury and Salisbury North - Edinburgh. Some of the more elevated areas in the east are more attractive to mature families, perhaps second or third home buyers, upgrading their housing options eg Salisbury Heights. There are also many part of the City that are showing evidence of suburban regeneration, whereby older households make way for younger households. This trend is found in suburbs that underwent their main phase of development in the 1980s and 1990s, such as Para Vista - Valley View - Walkely Heights. The population of these areas may even be in decline as households mature, but over time as younger households move in there will be a minor wave of population growth.

There are significant differences in the supply of residential land in the City that will influence population and housing outcomes over the forecast period. New greenfield opportunities are becoming scarcer and are typically found on parcels of land that have been or are currently active market gardens or contain industrial uses. Residential supply has been identified in Burton - Non Urban West, Parafield Gardens - Greenfields, Paralowie and Mawson Lakes. It should be noted that the major growth phase of Mawson Lakes has largely been completed, and it is expected residential development opportunities will be exhausted by the end of this decade. In recent years incremental infill developments have increased and this is also an important source of new housing, particularly in older suburbs with larger blocks that can accommodate medium density housing developments such as villas and townhouses. It is assumed that most infill development will occur in suburbs such as Ingle Farm, Pooraka and Para Vista - Valley View - Walkely Heights and Salisbury. Overall, more than 9,000 new dwellings are assumed in the City over the forecast period, resulting in a 2036 population of around 151,500 persons.

Powered by .id (informed decisions) for City of Salisbury