The City of Rockingham is a predominantly residential Local Government Area in southern Perth, with the main centre at Rockingham about 40 kilometres south of the Perth GPO. The City has strong north-south linear divisions, with the western coastal strip predominantly developed with post Second World War residential areas. The City is traversed by the Kwinana Freeway and Mandurah train line, which provide important transport links into central Perth. East of the Kwinana Freeway is more rural and rural-residential in nature, while the central areas are dominated by large nature reserves and lakes, as well as new residential development fronts in Baldivis. The City also features a major naval base at Garden Island. Despite the rapid growth of the City over the last few decades, there are still pockets of agriculturally productive areas, specifically horticulture and potato farming.

Urban development in the City was slow during the nineteenth and early twentieth century. As road transport improved and growth in Perth increased in the post-war period, the coastal village of Rockingham enhanced its role as a holiday and retirement area. Increased industrial employment in Kwinana during the 1950s and 1960s was a further impetus for residential expansion in the area. However, it was not until the 1970s and 1980s that rapid growth took place, with high rates of development in Cooloongup, Safety Bay, Waikiki and Warnbro. In the last fifteen to twenty years urban development moved further south to Port Kennedy and Secret Harbour, and more recently to Baldivis. Rockingham has been one of the fastest growing LGAs in Western Australia since 2001, with the population increasing from around 74,000 to just under 110,000 in 2011 - around 4% per annum.

The primary housing market role that the City has played over this period has been to provide affordable home owning opportunities for families and prospective families, particularly from the southern suburbs of Perth (Kwinana, Cockburn and Gosnells). Over time, Rockingham has absorbed increasing demand levels from within the City itself, as children leave the family home and form their own households. Nevertheless the primary housing market remains families and prospective families attracted to greenfield housing developments. The City of Rockingham has also gained large numbers in net terms from overseas and from interstate sources. The City loses population to coastal areas to the south, notably Mandurah, Murray and the South West (Busselton, Bunbury and Margaret River). 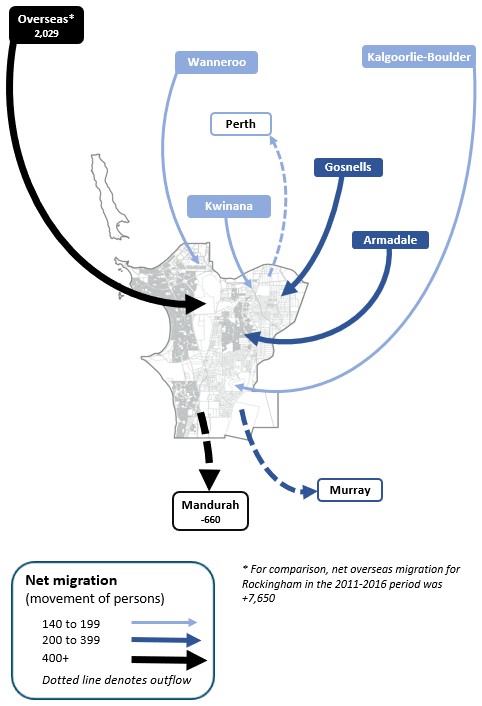 Although Rockingham has traditionally attracted young families seeking home owning opportunities, the prolonged period of rapid development in the last few decades has resulted in an increasingly diverse housing market. Frontier suburbs such as Baldivis continue to attract young families, as do more established suburbs with significant greenfield supply such as Golden Bay. As the urban development front progresses southward into Karnup-Keralup, this area is assumed to attract a simliar housing market. In contrast, parts of the City that experienced their main growth phase in the 1970s, 1980s and 1990s, now have limited opportunities for future growth and there is assumed to be minimal population change through migration. These areas include Cooloongup, Safety Bay, Shoalwater and Warnbro. Another distinctive housing market operates in Rockingham City Centre, Rockingham - Peron - Garden Island and Waikiki which have some development opportunities, but attract a mix of young adults and mature families.

There are also significant differences in the supply of residential property within the City which will also have a major influence in structuring different population and household futures over the forecast period. Signficiant future residential supply has been identified in Baldivis and Karnup - Keralup in particular, as well as short term opportunities in Golden Bay and Secret Harbour. Significant long term residential supply is assumed in Rockingham City Centre as development opportunities in the city centre and along the foreshore are realised. On the other hand, limited opportunities for infill devleopment will result in minimal population change in Cooloongup, Hillman - East Rockingham and Warnbro.

Powered by .id (informed decisions) for City of Rockingham