The City of Port Phillip is located in Melbourne’s inner south and is highly diverse in terms of land uses. The northern and western areas of the City are dominated by employment uses, while there are major retail and commercial strips in St Kilda on Acland and Fitzroy Sts, in Port Melbourne on Bay St and in South Melbourne on Clarendon St. The southern and eastern areas are generally residential in nature, while the central part of the City is dominated by Albert Park and Albert Park Lake. Urban development in the City dates back to the nineteenth century, with development initially occurring around the current centres of St Kilda, Port Melbourne (Sandridge) and South Melbourne (Emerald Hill) and accelerating after the 1850s. These areas became more accessible to Central Melbourne due to railway and tram links. Urban development continued for most of the 19th century with most of the City of Port Phillip being built out by the First World War, with Elwood and East St Kilda being the last areas to be developed.

There have been major areas of development since this time, including the development of ’Garden City’ in Port Melbourne on reclaimed land during the interwar years, as well as the significant ’flat boom’ of the 1960s when a large share of the housing stock across the City (notably in St Kilda) was redeveloped for higher density stock. There were also large areas of the City redeveloped for public housing during the 1960s. Throughout this post-war period, the population of Port Phillip was changing from one dominated by working class families to having a larger share of young people (18-29 years). They were attracted to the affordable rental stock and access to education and employment opportunities in central Melbourne.

During the late 1980s and 1990s, new residential development opportunities were created with the re-zoning of industrial sites in Port Melbourne (Beacon Cove) and surplus government and utility land, which further facilitated this demographic process. New development opportunties will be provided by the redevelopment of more than 250 hectares of industrial land within the Fishermens Bend Urban Renewal Area, the vast majority of which falls within the City of Port Phillip. In total it is expected that by 2050, this area will accomodate 80,000 new residents. This forecast currently incorporates estimates for the Fishermens Bend Urban Renewal Area, and these will be revised in due course. It is also expected that the location of the new ANZAC Station will promote significant high density development within the Domain small area. There is significant pressure for residential expansion within Port Phillip from both existing residents and from external migrants, most notably from overseas, interstate and regional Victorian sources, although affordability issues have resulted in the loss of people to the inner and middle-western and south-eastern suburbs. It is assumed that a number of these patterns will continue into the future, notably the large overseas flows into the City. 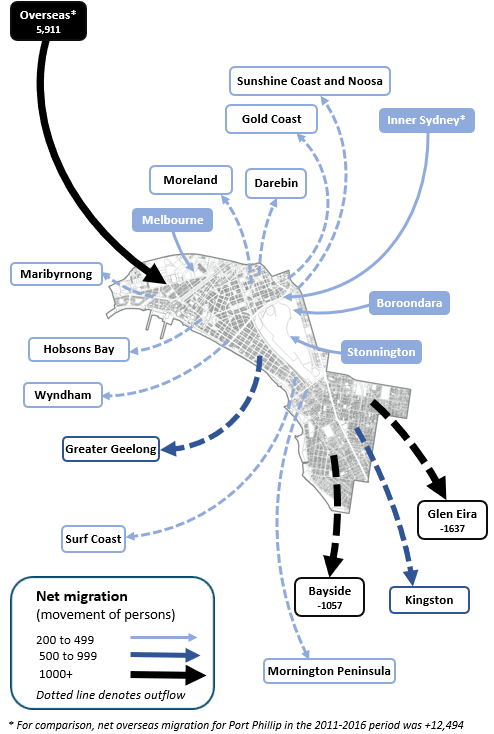 Areas have developed different roles within the housing market. These roles generally fall under two categories: 1. Young adults and tertiary students and; 2. Young adults and older adults-’empty-nesters’. The first pattern dominates most areas in the municipality, especially St Kilda, East St Kilda and Elwood-Ripponlea due to the proximity and access to tertiary education facilities an employment in the inner City and the large amount of rental stock. The profiles in South Melbourne, St Kilda Road and Middle Park-Albert Park tend to have a higher share of migrants aged 25-29 years. The second pattern is noteworthy in Port Melbourne, where the construction of the Beacon Cove Estate and the very different housing stock in the ’Garden City’ area facilitates a broader migration profile. This difference in function and role of the small areas in the City of Port Phillip means that population outcomes differ across the municipality.

There are also significant differences in the supply of residential property and opportunities within the City which will have a major influence in structuring different population and household futures over the next five to fifteen years. Large development sites have been identified in St Kilda Road, Domain, St Kilda, South Melbourne, Port Melbourne (the latter two areas containing, amongst other opportunites, the Fishermens Bend Urban Renewal Area). Domain is also expected to have considerable future development opportunity once the ANZAC station is completed around 2026. This is likely to encourage high density development both for residential and employment use. East St Kilda while Middle Park - Albert Park and Elwood - Ripponlea are expected to grow more moderately with most development coming from small sites and infill type developments.

Powered by .id (informed decisions) for City of Port Phillip