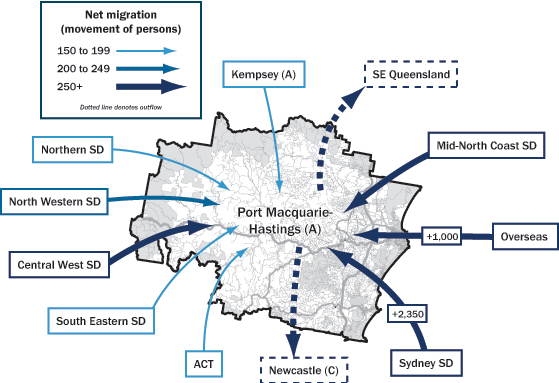 cquarie-Hastings Council area is located on the mid north coast of New South Wales. The area comprises the major urban centre of Port Macquarie, the townships of the Hastings and Camden Haven valleys and a large rural hinterland. While a penal settlement operated in Port Macquarie between 1821 and 1833, it was not until the 1860s that settlement began for agricultural purposes. Many of the rural settlements date from the early years of the 20th century, particularly after the railway was constructed from Maitland. By far, the most significant period of development in Port Macquarie-Hastings has been the post war era. The increase in availability of private motor transport has resulted in significant demand for residential development in coastal areas away from traditional rail-based inland townships. This has been consistent with coastal areas around Australia over this period. The primary housing market role that Port Macquarie-Hastings has played during the post-war period was to attract families and retirees from areas further south, in particular metropolitan Sydney and the Central Coast.

The importance of Port Macquarie-Hastings as a destination for families and retirees from areas further south is expected to continue over the forecast period. As a result of this there is significant pressure for residential expansion within Port Macquarie-Hastings from both existing residents and from people moving to the area.

It is assumed that this pattern will continue into the future, driving development on the outskirts of Port Macquarie, around Lake Cathie, in the Camden Haven and further afield.

The appeal of the area is a reflection of the natural attractiveness of the area, the climate and the significant amount of residential housing opportunities close to the coast. Local demand is relatively strong as Port Macquarie has reached a size where it is creating significant numbers of new households (children leaving home) seeking new dwellings.

With the variety of residential and rural locations, different areas within Port Macquarie-Hastings have developed different roles within the housing market. Areas on the outskirts of Port Macquarie such as the Innes Peninsula, Lighthouse Beach - Greenmeadows and Shelly Beach - Bellevue Hill are attractive to both young and mature families as well as retirees. Inner West Port, Lord Street and Town Beach - CBD have a significant component of medium and high-density housing, which attracts younger adults as well as retirees. Camden Haven and Lake Cathie-Bonny Hills attract significant numbers of retirees, while the rural area attracts fewer retirees and lose significant numbers of young adults as they seek employment and educational opportunities in larger centres. The variety of function and role of the small areas in the Port Macquarie-Hastings Council area means that population outcomes differ significantly across the LGA.

There are also significant differences in the supply of residential property within the LGA which will also have a major influence in structuring different population and household futures within Port Macquarie-Hastings over the next five to ten years. Significant new ’greenfield’ opportunities have been identified in Thrumster, the Innes Peninsula, Lake Cathie - Bonny Hills and Camden Haven West, while Lighthouse Beach-Greenmeadows and the Hastings River Canals have remnant residential land available. Other areas such as Town Beach-CBD, Inner West Port, Lord Street and Westport are expected to have some growth in dwellings, but based predominantly on infill of vacant lots and more intense use of land.