The City of Playford is located in Adelaide’s outer northern suburbs. It is a diverse municipality in terms of its land use and economic base. It features a mixture of residential, industrial and commercial activities in the urban areas of Elizabeth and Smithfield, while rural areas to the west and east boast significant agricultural and specialised horticultural production, as well as semi-rural and rural-residential living. The earliest settlements in the City date from the 1850s and were established to service the surrounding rural districts. However, significant population and residential growth was not recorded until the post-war period, when the South Australian Government established Elizabeth as a major industrial satellite for Adelaide. At the time, the drivers of growth were a rise in economic conditions which saw large numbers of migrants arriving from the UK and southern Europe increasing demand for affordable housing. In response to the shortage of available land for housing in the existing metropolitan area, the State recommended the development of outer suburban sites or the construction of a satellite town. There was rapid residential growth in and around Elizabeth during the 1950s and 1960s to support industrial expansion, with the South Australian Housing Trust playing a major role as a developer. From the 1970s, growth occurred in the suburbs surrounding Elizabeth and slightly later, the northern and north-eastern suburbs of Adelaide have expanded to effectively incorporate Salisbury and more recently the urban parts of Playford as part of the contiguous urban area of Adelaide. Progressively, through the 1980s, 1990s and into the 2000s - public housing, including community housing, became residualised. Much of the growth in the last two decades has been in the new housing estates of Andrews Farm, Blakeview, Craigmore and Hillbank and more recently in Munno Para and Munno Para West.

Rapid growth ensued in and around Elizabeth during the late 1950s and 1960s. An inflow of skilled migrants came from the UK attracted to inexpensive housing, the prospect of home ownership and steady employment. Later, Virginia, located west of Elizabeth, became home to many Bulgarian, Greek, Italian and later Vietnamese migrants. The growth in new large greenfield residential development is this influence that is likely to play a stronger role in the City of Playford in the future. The City is likely to provide a large number of new residential opportunities for suburban expansion in the northern suburbs of Adelaide. The City of Playford’s proximity to a large source of household forming young adults (in Salisbury, Tea Tree Gully and Playford itself) should increase the demand for urban development in the area, especially as other residential opportunities in the broader northern suburban housing market have been developed (most notably in the City of Tea Tree Gully). The City should also play a role as a rural-residential / township destination, although areas to the north (Gawler and Light) may play a greater role in this regard. 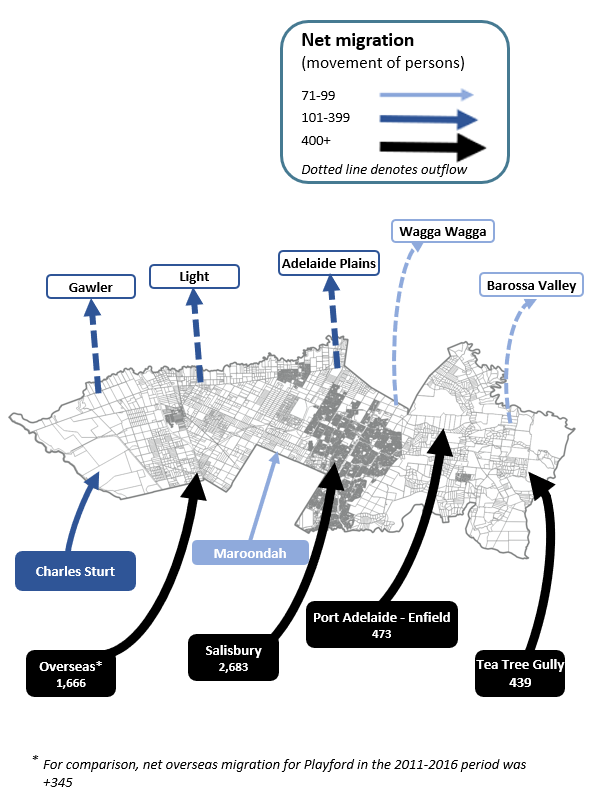 With the varied development phases, the overall size of the municipality and the different housing types, areas within the City of Playford have developed different roles within the housing market. Areas such as Hillbank, Craigmore, Blakeview and Andrews Farm have been developed for residential purposes in more recent decades and are attractive to couples and families seeking new housing opportunities. The rural areas in and around One Tree Hill, Angle Vale, Virginia and Penfield are attractive to mature families looking to upgrade to their second and third home and in most cases seeking a rural environment and lifestyle. Many of the established areas of Elizabeth and Smithfield provide more affordable housing options. New growth areas in the north, including Angle View, Playford North and Munno Para will provide mainly housing opportunity for young couples, young and established families with children and to an extent, housing for empty nesters and retirees who may sell property within central Adelaide and downsize then settle in these new growth areas in the City of Playford. This variety of function and role of the small areas in the City of Playford means that population outcomes differ significantly across the municipality.

There are also significant differences in the supply of residential property within the City which will also have a major influence in structuring different population and household futures within the City of Playford over the next five to fifteen years. Significant new ’greenfield’ opportunities have been identified in Andrews Farm, Playford North, Munno Para, Blakeview, Buckland Park, in the municipality’s west (surrounded by Virginia) and to a lesser degree Craigmore and Virginia. A number of redevelopment sites have also been identified in Smithfield Plains and in the assumed redevelopment of the ’Peachey Belt’ (Peachey Rd, Davoren Park and Smithfield Plains). Other residential opportunities are assumed to be limited, but there is substantial redevelopment potential in the established suburbs of Elizabeth, as well as around the Elizabeth City Centre. Except for Virginia, the Buckland Park growth area near Virginia and Angle Vale, the rural areas to the west and east (One Tree Hill-Rural East) are expected to have only limited rural residential development during the forecast period.

Powered by .id (informed decisions) for City of Playford