The City of Perth is the primary commercial, cultural and transport hub for the greater Perth metropolitan area. European settlement dates back to 1829 when the Swan River colony was established. The City developed slowly from its colonial beginnings, but growth was stimulated by the discovery of gold further inland towards the end of the nineteenth century. Growth in the post WW2 era has been further spurred by the resources sector and the wealth created over many decades.

Like other Australian cities, the original settlement contained a variety of land uses, but as the urban area expanded outwards the City developed as a key industrial and commercial centre. Residential functions declined in importance as people moved to the suburbs, and this resulted in population decline over much of the twentieth century. This pattern has reversed since the 1990s, starting with the redevelopment of former industrial areas in Claisebrook into housing and, more recently, construction of high-rise apartments in the CBD and West Perth. The speed of growth and change is largely due to the attraction of central Perth for employment, education and lifestyle opportunities. These factors, as well as the nature of the dwelling stock (typically one and two-bedroom apartments), are especially attractive to young adults seeking rental accommodation in an inner city location.

The movement of young adults in and out of the City dominates the migration profile. Similar to other Australian cities, inner city living is increasingly popular, and this has created demand for housing in close proximity to employment centres and tertiary education institutions. In recent years the mining boom has also played a role in this increasing demand for inner city housing.

The City gains population from parts of suburban Perth, as well as interstate (especially Sydney and Adelaide) and overseas. The City loses population to neighbouring councils, particularly to neighbouring suburbs with similar attractors to CBD living. There is also a loss of young families to suburban Perth, which suggests that young adults will move out of the area once they wish to form a family. There is some evidence of in-migration of older couples and single people, but the data do not suggest a significant trend of empty nesters trading in their suburban home for an inner-city apartment. 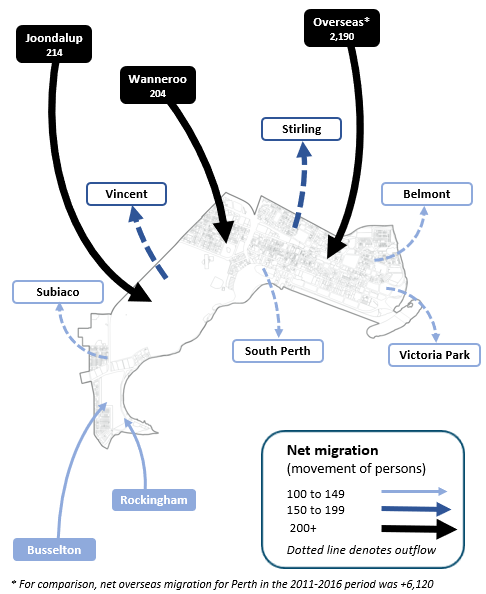 Young adults are the main driver of population change in the City, and this trend is assumed to continue into the future. Not only is the City the major commercial and employment hub in metropolitan Perth, but it is also strategically located in terms of access to universities, and to a lesser extent, the airport. These act as pull factors for young renting households - both students and young professionals. Residential construction in the City consists of high-density apartments primarily with one or two bedrooms, which are more suitable for and attractive to younger, smaller households.

This forecast was undertaken during the early period of the Covid-19 pandemic, so it’s based on .id’s assessment of the likely impacts at that point. Approximately 13,500 dwellings have been assumed over the forecast period (2016-2041). Although significant residential supply has been identified on specific sites such as CityLink, Elizabeth Quay and the Riverside Precinct, demand is likely to be low for the next 4-5 years owing to the covid-19 crisis and an overall fall in overseas migration to Australia. Following a significant drop in demand post-mining boom across the wider metropolitan area, City of Perth had nonetheless recorded positive growth in housing approvals, increasing in the post-2016 period as the State’s economy recovered and housing demand began to pick up. This recovery is likely to be halted over the short-term owing to the impact of the Covid-19 pandemic.

Because these forecasts were undertaken during the early period of the pandemic, the impacts are uncertain, and will be unprecedented. Given this, it has been assumed that the housing market will face a similar slump to that experienced post-2013 when the mining boom ended, assuming a similar economic effect on the City. The modelling has assumed that approvals for new housing approvals from around 2020-2025 will fall to similar levels experienced over the 2013-16 period, before undergoing a similar recovery to that experienced around 2017-2019.

It has also been assumed that there will be a fall in overseas students over the 2020-2023 period, particularly affecting particularly Crawley and Nedlands, and suppressing the commencement and subsequent rate of development in West Perth. Student accommodation that is under construction is assumed to complete, but it is forecast that construction of student housing will be very limited in the medium term.

Regardless, the City of Perth is forecast to record moderate to strong growth over the entirety of the forecast period, with the population rising from 26,950 in 2016 to 49,107 in 2041, which represents an annual growth of 2.4%. This is lower than growth between 2006 and 2016, which was very high at 6% per annum. The impact of the Covid-19 pandemic is illustrated by the fact that forecast growth between 2021-2026 is only 1.6% per annum – the lowest growth over the forecast period.

Powered by .id (informed decisions) for City of Perth