The City of Parramatta is located in Sydney’s western and north western suburbs. The City is a predominantly established, residential, commercial and institutional municipality with a diverse range of housing stock and residential neighbourhoods. In 2016, the City underwent a major change to its administrative boundaries, with the suburbs south of the Western (M4) Motorway being transferred to Cumberland Council (most of the suburb of Granville, and all parts of Guildford, South Granville and Merrylands). The City’s northern boundary was extended to the Hills (M2) Motorway, gaining areas formerly within the Hills Shire and the Shire of Hornsby (North Rocks, part of Beecroft and the parts of Northmead, North Parramatta, Epping and Carlingford that fell outside the old boundaries) as well as its southern boundary being extended east along the Western (M4) Motorway to encompass Silverwater, Newington, Wentworth Pont and Sydney Olympic Park (previously within the former City of Auburn)The Parramatta CBD area is one of the earliest areas of settlement in Australia and serves as the major commercial centre of western Sydney.

The Parramatta Township was established in 1790, with development starting south of the Parramatta River, then progressing to the north. Growth was minimal until the 1850s, aided by the construction of the railway line. Expansion continued in the late 1800s, with Parramatta becoming a commercial centre for the western Sydney area. The City’s growth continued in the 1920s. The most significant development occurred during the post-war years, aided by industrial growth, immigration and the establishment of several public housing estates. The population boomed during the 1950s and 1960s. Growth has continued since the 1960s, although at a slower rate. The population continued to increase steadily from the early 1990s, rising from about 152,000 in 1991 to about 195,000 in 2011. Recent growth was due mainly to urban consolidation (medium and high density housing) in existing residential areas, and the redevelopment of former industrial areas in the south-eastern suburbs.

In recent years, the City has played a range of housing roles specific to different suburbs. The most prominent role has been the attraction of young adults to the City from surrounding Local Government Areas. The City is attractive due to its access to employment, education and transport. The City has a broad economic base, with significant employment in office, institutional and industrial uses. The location of some of Sydney’s major hospitals is a significant source of local employment. While the City is an attractor of young adults, it loses young families with children to areas to the north and west. The supply of family style detached housing is not being expanded in the City while at the same time significant numbers of new detached houses are being constructed in The Hills Shire and Blacktown City.

It is generally assumed that most of these broad patterns will continue into the future, most notably flows into the City from areas to the south and east, the loss of population to growing areas to the north, and the attraction of young adults. 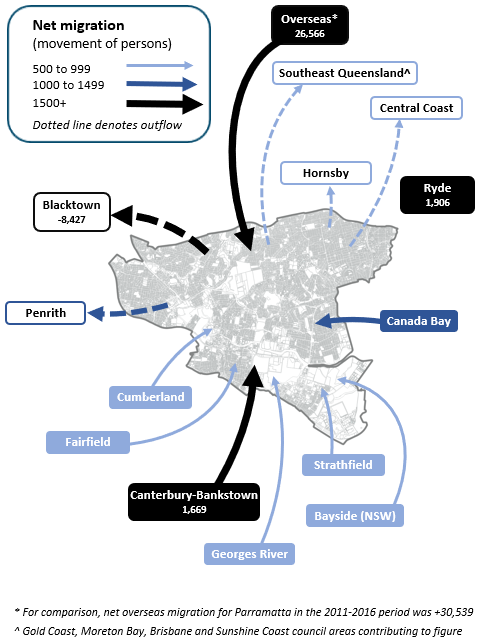 With the progressive residential development of the City, areas have developed different roles within the housing market. Many areas within the City tend to be attractive to established families, such as the north eastern suburbs of Beecroft, Carlingford, Epping and Eastwood as well as Winston Hills. Areas around central Parramatta (Parramatta CBD and Parramatta Remainder, North Parramatta, Harris Park, Northmead, Rosehill and Westmead) are more strongly influenced by the inflow of younger people, as are suburbs such as Silverwater and Sydney Olympic Park. Wentworth Point differs slightly in that, despite being a high density area, it attracts some older adults, possibly downsizers from within the City and surrounding areas seeking apartments with water views. Some western areas such as Toongabbie and Pendle Hill, are likely to regenerate over the forecast period attracting some younger families. This variety of function and role of the small areas in the City means that population outcomes differ across the City.

There are also large differences in the supply of residential property within the City which will also have a major influence in structuring different population and household futures over the forecast period. A number of significant new residential opportunities have been identified throughout the City.

Parramatta CBD and Parramatta Remainder will continue to see redevelopment of land for high density mixed use purposes. Significant supply remains north of the M4, particularly remaining industrial sites in Wentworth Point, as well as commercial Granville-Clyde, and along large commercial sites in Granville, such as along Church Street, as well as Sydney Olympic Park and the yet to be developed Carter Street Precinct. Similarly, suburbs such as Ermington and Melrose Park, which have large industrial precincts are likely to see large scale redevelopment, along the lines of the AE2 site in Ermington and, finally, the industrial precinct of Camelia also presents significant potential with the prospective redevelopment of the James Hardie site. New dwellings in these areas range from major lower density redevelopment sites to multi storey apartment developments. It is assumed that these areas will continue to attract young adults in particular who are seeking accommodation close to employment markets and education facilities.

Established residential areas such as Carlingford, Epping and Telopea are likely to have increased levels of medium and higher density dwellings following redevelopment of identified precincts around stations, along main roads (such as Pennant Hills Road) or as a result of a large scale public housing redevelopment. These are likely to diversify the existing housing types and provide more housing opportunities for young adults and potentially older downsizers. Other areas, such as Constitution Hill, Old Toongabbie, Beecroft, Oatlands, Newington, Silverwater and Winston Hills are expected to have relatively low numbers of additional dwelling stock over the forecast period, with any new dwellings being developed as a result of small-scale infill opportunity, with the redevelopment of existing housing to produce a small number of units or townhouses.

Powered by .id (informed decisions) for City of Parramatta