The North Sydney Council area is one of the oldest areas of settlement in metropolitan Sydney with European settlement dating from 1805. The relative inaccessibility and rugged terrain of the lower north shore meant that development was slow until the arrival of regular ferry services in 1830. While the 1880s saw significant development in the areas closest to the harbour, residential development expanded rapidly after the opening of the Sydney Harbour Bridge in 1932. The post war period has seen the emergence of North Sydney as a major commercial centre in the national context. Significant office development in the North Sydney CBD and to a lesser extent Milsons Point has established the area as a major destination. In the post war period, significant amounts of medium density housing were also constructed, particularly in areas such as Wollstonecraft and Neutral Bay.

The establishment of the North Sydney Council area as a major commercial, employment and entertainment centre has attracted a youthful, transient population. The area has a high proportion of rental dwellings, with the proportion of households renting privately double that of the Sydney Statistical Division. While the area attracts large numbers of young adults in their twenties, who are attracted to the North Sydney Council Area for employment and education opportunities, there are net losses of young families (0-9 and 30-39 year olds). These young families generally move to areas that have larger properties more suited to families, or for reasons of affordability. Historically, young adults have migrated to the North Sydney Council area from the municipalities of The Hills Shire, Ku-ring-gai and Hornbsy, to name a few. Young families with and without children have left the LGA in search of affordable housing in nearby areas such as Willoughby City, Warringah and Lane Cove, within New South Wales. The Council area also attracts significant numbers of overseas migrants with 8,600 overseas arrivals recorded in the 2006-2011 period. The major driver of population change in the North Sydney Council area is the continued attractiveness of the area for young adults seeking inner city accommodation close to employment and entertainment. Also, the addition of large numbers of new (mainly high density/apartment) dwellings, particularly in St Leonards and North Sydney will result in population growth in the Council area. 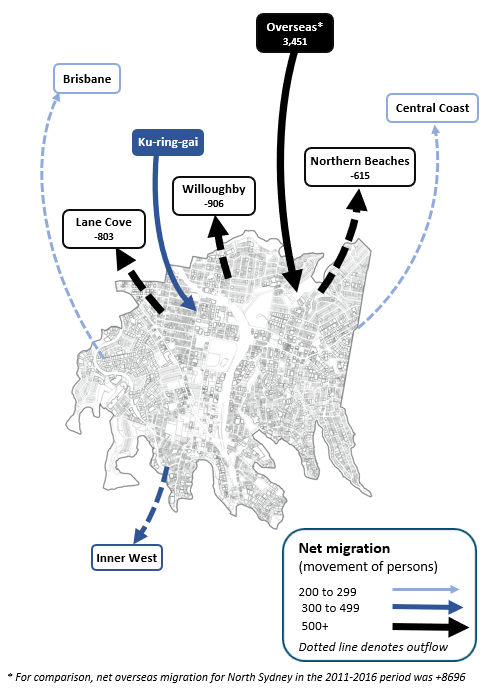 Despite some variations in the dwelling tenure and dwelling type in the various suburbs within the North Sydney Council area, there are enormous similarities in terms of the type of housing market that is being addressed. All areas are expected to continue to experience net gains in young adults and net loss of young families for the reasons outlined above. Some areas, such as Cremorne Point or Waverton, for example, tend more to 25-29 year olds rather than 18-24 year olds as in other places, with some notable gain of mature adults aged 40-54 years. Areas with continuing and increasing rates of residential development, such as North Sydney and Crows Nest - St Leonards still retain their housing market roles though absolute rates of net migration gain are greater throughout the forecast period due to higher levels of growth. These migration trends will result in a similar overall age structure in the North Sydney Council area over the forecast period.

Within the North Sydney Council area, small areas have developed and will continue to evolve different roles within the housing market. Variations occur due to when areas were settled, the range of land uses in the area, developer interest and the varying planning policies in play. Crows Nest - St Leonards, North Sydney, Cammeray and Neutral Bay – Kurraba Point, for example, tend to attract people in their late teens and early twenties due to the proximity to places of employment either within the North Sydney Council area or across the bridge in the Sydney CBD. Areas expecting the most growth are Crows Nest-St Leonards and North Sydney, with more than 60% of all growth within the LGA forecast to occur here. The proximity to rail transport and other services, as well as the higher share of rental stock (apartments) also attracts younger people in these age groups to the aforementioned areas. For prestigious and prominent areas which are almost fully developed, such as Cremorne Point and Kirribilli, limited growth and residential development is expected and any additional intensification would have an impact on heritage and visual amenity. The North Sydney Council area is part of Metropolitan Sydney’s global economic corridor and in recent years, as residential land use in central parts of the LGA have encroached onto traditionally commercial land, a need has been identified by both the State and Local government to balance the commercial/employment hub growth with residential development around centres near main transport networks in order to provide more homes closer to jobs and boost the productivity of the North Sydney Council area. With these guidelines in mind, local government development strategies and State government plans anticipate continuing growth of high density residential development in certain parts of the North Sydney Council area in the short and mid-term of the forecast period while also retaining commercial floorspace and a strong employment hub.