The City of Newcastle is located in the Hunter Region of New South Wales, around 160 kilometres north of Sydney. The City is predominantly urban, with a population of around 161,000 at 2016. The City is the major centre of the Lower Hunter. The greater Newcastle area (including Maitland, Raymond Terrace, northern Lake Macquarie) is the seventh largest city in Australia with a population around 540,000 residents.

The City contains large areas of industrial and employment use, focussed along the lower reaches of the Hunter River and the port. The City is one of Australia’s largest ports and is the largest coal exporting port in the world, servicing the coal rich Hunter Valley. The port area and surrounding industrial areas is a significant employment node, with other important industries in the City include Health and Education. The City contains the University of Newcastle as well as the John Hunter Hospital, the major trauma hospital servicing northern New South Wales.

European history in the City dates from 1797, when abundant resources of coal were discovered. Lime and cedar were also of importance to the fledgling colony of New South Wales. A convict settlement was established in 1804 and lasted for 20 years. In the period from 1815-1818 the first streets were laid out. From the 1820s, the penal settlement ended and large numbers of free settlers began to move into the area. Newcastle developed as a significant coal mining area, with numerous collieries opening up from the 1830s. Most of these had closed by the 1960s as coal mining operations moved further inland into the Hunter Valley, Other major industries included soap manufacturing and the BHP Steelworks, which operated from 1911 to 1999. By 1921, what is now the City of Newcastle had grown to around 85,000 residents. In this period, the City still functioned as a series of sometimes isolated townships, often separated by scrub and poor quality roads. By 1938, when 11 councils merged to form the City of Greater Newcastle, the population of the new City was 112,000. The City experienced continued population growth in the post war period, driven by industrial employment servicing Australia’s economic growth.

The City is expected to continue to grow in population over the forecast period, catering for demand from new households being created within the Lower Hunter, as well as the movement of young adults for tertiary education and employment opportunities. The City plays the role of attracting young adults from both the Lower Hunter and northern New South Wales. Much of this demand is expected to be met in the inner city, as well as areas closest to the University. Fringe growth areas in Fletcher and Minmi are expected to cater for young couples and families.
Historical migration flows, City of Newcastle, 2011-2016 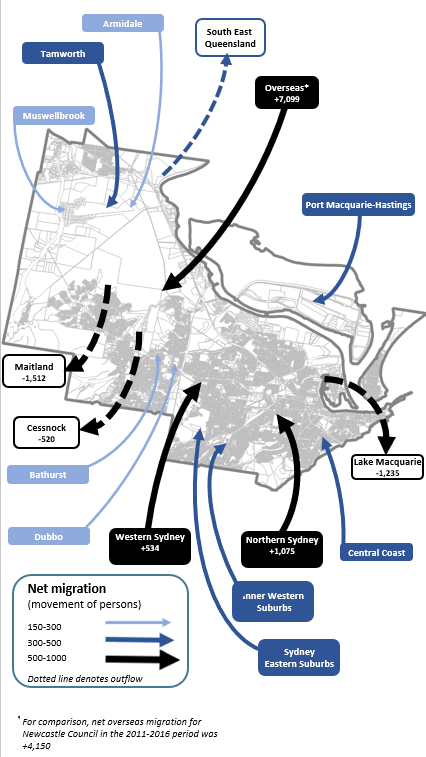 With the variety of residential and rural locations, different areas within the City of Newcastle have developed different roles within the housing market. Areas on the outskirts of Newcastle such as Fletcher, Minmi and Maryland are attractive to young families. The inner city areas including central Newcastle, Maryville, Wickham, Broadmeadow, Carrington, Cooks Hill, Mayfield and Islington attract young adults and lose young families in net terms. Further out, Adamstown Heights, Kotara are expected to attract older families. The areas closest to the University such as Birmingham Gardens, Lambton and Jesmond attract large numbers of students. The variety of function and role of the small areas in the City of Newcastle means that population outcomes differ across the LGA.

There are also significant differences in the supply of future residential land within the LGA which will also have a major influence in structuring different population and household futures within the City over the next five to ten years. Significant new ’greenfield’ opportunities have been identified in Fletcher, Minmi, Elermore Vale and Wallsend. Inner city areas such as Newcastle, Newcastle West, Mayfield, Adamstown, New Lambton, Broadmeadow, Maryville - Wickham and Islington are also expected to provide new dwelling opportunities through the forecast period.

Powered by .id (informed decisions) for City of Newcastle