The Shire of Murray is a predominantly rural Local Government Area, with the major township at Pinjarra about 80 kilometres south of Perth. The Shire of Murray is known for its environmental attributes. It is bounded at its western end by the Peel Inlet and Harvey Estuary which are fed by the Murray, Serpentine and South Dandalup Rivers. The Shire also features significant forestry and conservation reserves and important water catchment areas, namely the North Dandalup, Conjurunp and South Dandalup Reservoirs.

The Shire currently features a relatively small residential population, with the majority of residents located at the western end of the Murray River at South Yunderup, North Yunderup, Furnissdale and Ravenswood, as well as in Pinjarra. Other settlements of note include North Dandalup, Dwellingup and Coolup. The economic base of the Shire is strongly influenced by alumina refining at Pinjarra, with more than a third of all jobs carried out in the Shire of Murray associated with this industry. Other important industries include construction (driven by housing growth in the region) and other services, such as retail trade, education and health. Agriculture and forestry are the dominant land uses, but employ less than ten per cent of the population.

European settlement in the Shire of Murray dates to the establishment of the town of Pinjarra in the 1830s. However, for more than a century, population growth in the area was driven by rural expansion. In 1974, Alcoa Australia opened its alumina refinery near Pinjarra, providing a large boost to both economic and population growth in the area. Since the mid 1980s, population growth rates have been especially high with the population doubling from 7,000 in 1986 to just below 15,000 in 2011. A solid economic base, as well as proximity and accessibility to Perth and the growing centre of Mandurah have positioned Murray to grow at faster rates in the future.

The primary housing market role that the Shire has played over the last two decades has been to provide relatively affordable housing for young and established families, as well as retirees and older adults. This role is expected to continue and expand as the stocks of residential land in Mandurah are depleted and as housing costs in Perth remain high. The majority of people moving to the Shire of Murray are expected to come from established areas in southern Perth, although over time, large net gains from Mandurah could also be expected. 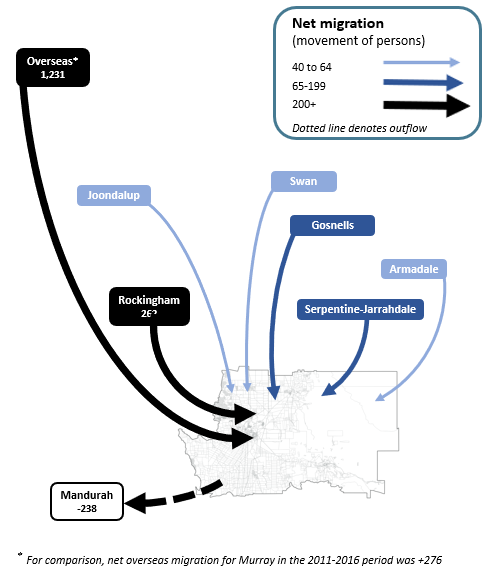 Within the Shire of Murray, areas have developed and will continue to evolve different roles within the housing market. Variations occur due to environmental and aesthetic differences, the type and quality of residential and rural residential development being undertaken, the range of land uses in the area and accessibility to employment and services. As the largest centre in the Shire, Pinjarra tends to attract a range of markets, from young and established families, through to mature adults, empty-nesters, retirees and the elderly. Areas close to the mouth of the Murray River (South Yunderup, North Yunderup, Furnissdale and Ravenswood) tend to attract a combination of young families, empty-nesters and retirees. Rural areas tend to attract a greater share of young families, attracted to rural lifestyles and affordable housing.

There are also significant differences in the supply of residential land within the Shire which will also have a major influence in structuring different population and household futures over the forecast period. In the short to medium term, large greenfield stocks are available in South Yunderup, Pinjarra and Ravenswood. In the longer term, these areas are likely to be supplemented by a range of new greenfield areas (Ravenswood North, West Pinjarra and Point Grey), as well as increasing opportunities for development in fragmented greenfield in Furnissdale and North Yunderup. By comparison, steady, although relatively incremental housing growth is anticipated in the more rural areas of the Shire of Murray, such as North Dandalup, Nambeelup, Dwellingup and Coolup.