The Rural City of Murray Bridge is located in the Murraylands Region of South Australia, about 76 kilometres south-east of the Adelaide CBD. The area is rural in nature, and its settlement pattern is focused on the Murray Bridge township, which is situated on the Murray River and the Princess Highway, the major transport link between Adelaide and Melbourne. The remainder of the council area consists of rural areas including the smaller settlements of Avoca Dell, Callington, Mypolonga, Sunnyside, Wellington, White Sands and Woodspoint.

The Rural City of Murray Bridge acknowledges that the Ngarrindjeri people were the first peoples of this country.

Captain Charles Sturt was the first European in the area and, in 1930, set out to row down the Murray River to solve the mystery of why so many rivers flowed westward from the Great Dividing Range. From this time, it was thought that the Murray River could be used for transport. European settlement dates from the mid-1850’s, with land used mainly for grazing and crop farming.

Murray Bridge was established when a road bridge over the river was completed in 1879. It was followed in 1886 by the Adelaide-Melbourne railway line which guaranteed the city’s importance as a vital link across the river. Subsequent wharf facilities created a busy centre for river trade, resulting in the establishment of housing and supporting industry. The original township was laid out in 1883 and was called Mobilong, with the land sold in Adelaide in 1884. Later it was called Edwards Crossing, but became Murray Bridge when another railway bridge was constructed across the river in 1924. Development was concentrated along the east-west transit route formed by Adelaide Road and its western connection (Bridge Street) to the bridge. The planning of Murray Bridge was generally determined by geographical and transport infrastructural constraints, including the railway line to the north, the River Murray to the east and the South Eastern Freeway to the south.

South Australia’s third largest provincial city, the population of the Rural City of Murray Bridge has increased from around 17,000 in 2001 to almost 22,000 in 2017. Over this period, population growth rates in the Council area have been well above the average for South Australia. Access to services, good transport links to Adelaide and relatively lower-cost housing have acted as significant drivers for growth in recent years.

Between the 2011 and 2016 Censuses a significant source of in-migration to the Rural City of Murray Bridge was from overseas. Primary sources of intrastate in-migration were from the adjacent councils of the Coorong and Tatiara. Interstate migration into Murray Bridge came mainly from the Victorian council of Swan Hill and Alice Springs in the Northern Territory. Migration outflows over the 2011-2016 period were largely to the Adelaide Metropolitan area i.e. Burnside, Port Adelaide Enfield and Salisbury which offer greater opportunities for employment and education. Established families (children aged 5-14 years, parents 34-44 years) formed the main source of in-migration attracted to relatively lower-cost housing and services in a regional environment with transport links to Adelaide. Like most regional areas in Australia, Murray Bridge loses young adults, who move primarily to Adelaide for employment and education purposes. 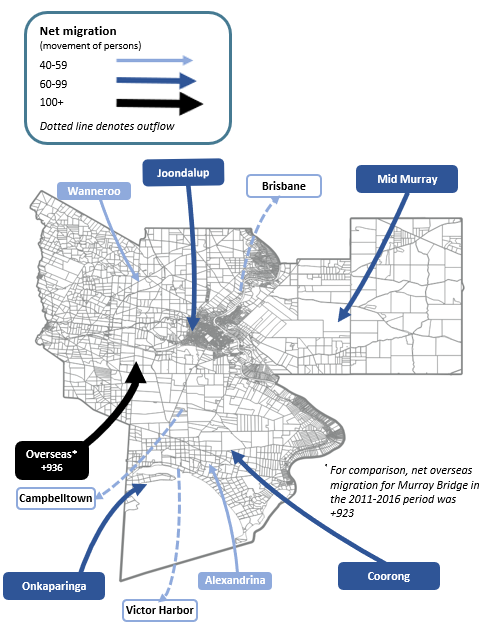