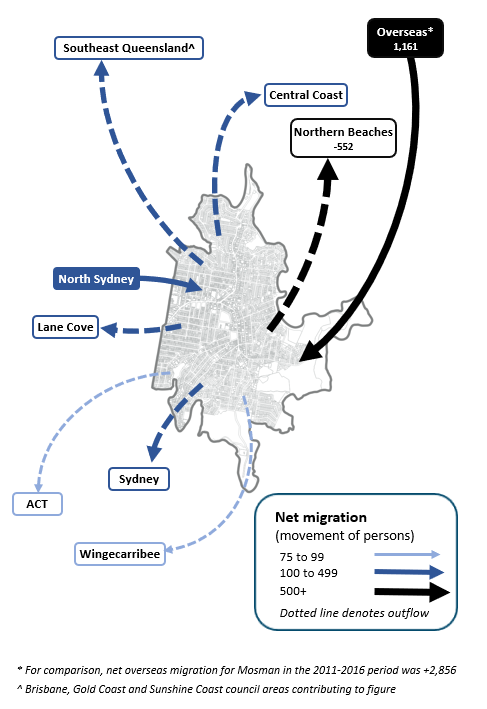 man Council area is located in Sydney’s northern suburbs, around 6 kilometres from central Sydney. The Council area is predominantly residential, with large institutional uses (including HMAS Penguin and the Taronga Zoo), as well as commercial areas along Military Road. The Council area includes significant areas of Sydney Harbour foreshore. Early settlement in Mosman dates from the 1800s, a result of the defence importance of the area. Early industries in the area included whaling and related uses. Development if the area was slow until the 1880s and 1890s, when road access was improved. Significant growth in Mosman occurred in the interwar period as well as the 1950s and 1960s when many residential flat buildings were constructed. Since this period, growth has slowed as development opportunities have become fewer. In recent years, the Mosman Council area has attracted two major housing markets - older families often with teenage children generally from the north shore and younger adults attracted to the large number of medium density rental dwellings.

There is limited opportunity for further residential development within many areas of the Council area, particularly those furthest from the Military Road spine.

With the variety of residential areas, natural characteristics and period of development, different areas within the Mosman Council area have developed different roles within the housing market. Areas furthest from the Military Road spine are attractive to mature families (usually third or fourth homebuyers). Areas closest to the Military Road area are attractive to young adults in their 20s. The variety of function and role of the small areas in the Mosman Council area means that population outcomes differ across the LGA.

There are also significant differences in the supply of future residential land within the Council area that will also have a major influence in structuring different population and household futures over the next five to ten years. New development opportunities have been identified in areas around Military Road such as Middle Harbour and Mosman Central. All other small areas are expected to have very low numbers of new dwellings over the forecast period.