The City of Moreland is an established municipality in the inner northern suburbs of Melbourne. Although the main land use is residential, there are significant commercial, retail and industrial areas throughout the City. The commercial areas of the municipality are heavily concentrated along the Sydney Road spine in both Brunswick and Coburg, as well as on Lygon Street, East Brunswick and the Glenroy shopping precinct. Industrial uses are concentrated in the western part of Brunswick and Coburg North. The City was once home to a substantial manufacturing base, but this has been in decline since the 1990s.

Urban development in the City dates back to the nineteenth century, with development in Brunswick and in the Coburg township. Yet it was not until the early twentieth century that significant urban expansion occurred, with growth centred on the southern parts of the City and along transport spines. By the post-war period, development was focused on areas such as Fawkner, Hadfield and Glenroy. The primary housing market role that the City of Moreland played during this period was to provide home owning opportunities for families and prospective families from the inner northern suburbs of Melbourne as well as recent overseas migrants.

The 1980s and 1990s were a period of population loss in the City as a number of areas matured, with children leaving the family home, as well as comparatively little residential development to provide housing opportunities. During the 1990s and into the 2000s, new development opportunities were realised, with the conversion of industrial sites and surplus government, utility and school land to residential purposes. This pattern is continuing today, as exemplified by the redevelopment of Pentridge Prison, the development of the greenfield site at Gowanbrae, as well as a number of former industrial sites scattered throughout the Brunswick region in particular. There is significant pressure for residential expansion within the City of Moreland from both existing residents and from external migrants, most notably from overseas, as well as areas to the south (the Cities of Melbourne and Yarra). At the same time, affordability issues have resulted in the loss of young families in particular to the outer north and west. It is assumed that a number of these patterns will continue into the future, notably the large overseas flows into the City. 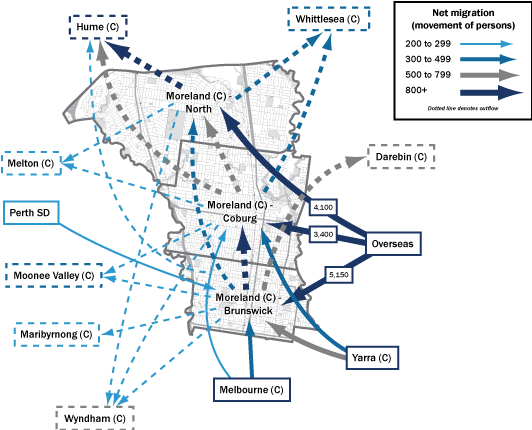 Historically there have been wide differences in residential role and function which have resulted in different housing and population outcomes. However in more recent years most areas of the City have become more popular with young adults, particularly students, singles and couples, seeking rental accommodation close to employment and education. This is due to a number of factors, but the most important are increased overseas migration, particularly of temporary residents such as students and working visa holders, reduced housing affordability, which pushes low income households (including students) further from the city, and the small size of the housing stock in the inner areas, which is not favourable for large families. Most suburbs in Moreland are attract large numbers of younger households, but lose young families, typically consisting of a couple in their thirties and their young children. The housing stock in parts of Moreland is mainly two bedroom homes, which might be suitable for a new family with one child, but suddenly becomes crowded when a second child is born, prompting a move to a larger home further north or west.

There are also significant differences in the supply of residential property within the City which will also have a major influence in structuring different population and household futures over the forecast period. The major source of additional dwellings and households in the City will be in the larger redevelopment sites and through infill and medium density development in existing residential areas. The majority of new dwellings are located on former industrial sites that are no longer in use. There is significant demand for new dwellings in the short term with a large number of apartment blocks under construction in Brunswick and Brunswick East at the time of forecast preparation in early 2017. In the medium to long term, significant development sites include the Pentridge redevelopment (ongoing - over 2,000 dwellings) and East Brunswick Village (approximately 600 dwellings). In addition to these, significant numbers of new dwellings are assumed in Brunswick West, Pascoe Vale and Glenroy. Overall, more than 32,200 dwellings are assumed in the forecast period with the population of the City of Moreland is forecast to grow from 154,250 in 2011 to 228,800 in 2036.

Powered by .id - the population experts for City of Moreland