The City of Moonee Valley is located in Melbourne’s north-west suburbs and contains a diversity of housing, ranging from inner suburbs such as Flemington and Ascot Vale to post war growth areas such as Keilor East and Avondale Heights. While being predominantly residential in nature, the City also contains major non-residential uses such as Essendon Airport and Moonee Valley Racecourse.

Early development in Moonee Valley dates from the gold rush period of the 1850s, when tent cities dominated the area between Melbourne Town and what is now Moonee Ponds. Growth continued in inner areas such as Flemington, Ascot Vale and Moonee Ponds until the First World War. Significant amounts of development in the inter war period saw suburbs such as Essendon, Strathmore and Aberfeldie substantially completed. In the post war era development spread west, with areas such as Keilor East and Avondale Heights attracting large number of family households. Residential development in these areas continued up until the 1980s

The City of Moonee Valley has experienced a relatively stable population over the last twenty years, with growth in infill development offset by a decrease in the average number of persons living in each dwelling. The City continues to address a range of housing markets, ranging from young singles and couples, particularly in suburbs closer to central Melbourne and mature families in areas such as Aberfeldie and Strathmore. It is also evident that the suburbs of Ascot Vale, Moonee Ponds and Flemington, which have a significant stock of older family style housing, have undergone a degree of regeneration and have attracted families with young children. The rates of growth are likely to increase over the forecast period, as a number of major development sites are released and significant number of medium and higher density units are constructed. The post war suburbs of Moonee Valley such as Keilor East and Avondale Heights experienced large rates of out migration of young adults over recent years as children of the original house purchasers leave home, although there are indications that these areas are also beginning to regenerate and attract young families. Similarly, areas such as Flemington, Ascot Vale, Moonee Ponds and Essendon, which have significant stocks of family housing, are also likely to continue to experience an increase in young and mature families as older households move on.

The City has been a beneficiary of migration gain from areas closer to central Melbourne and generally has been a source of out migration to fringe areas to the north and west. It is assumed that a number of these patterns will continue into the future, most notably flows into Moonee Valley from areas closer to central Melbourne, given the particularly given the development of higher density accomodation (much of which will augment the rental stock in the area) along the main arterial roads and close to stations and retail centres. Higher rates of development (particularly in higher density rental accomodation), the regeneration of a number of suburbs and the continued ageing of the population may result in lower rates of out migration to fringe areas. During the forecast period, it is expected that Moonee Valley will provide a significant share of its own demand as new households are created through children leaving home, relationship breakdown or older persons seeking smaller dwellings in their local area. 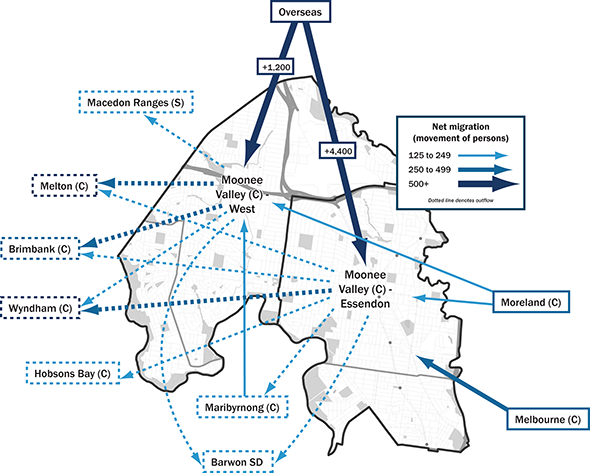 With the progressive residential development of the City over many decades, areas have developed different roles within the housing market. Areas such as Flemington, Ascot Vale and Moonee Ponds have attracted significant numbers of young singles and young couples who are keen to live near central Melbourne with the employment and entertainment benefits this brings. Essendon, too, has had increasing apartment development along Mt Alexander Road and Keilor Road, with a consequent in crease in rental stock, proving attractive to young adults. These areas have also undergone a degree of regeneration, as older households are replaced with young and mature families attracted to the amenity of inner suburbs, as well as the period housing. Many couples have already settled in the area prior to starting a family, as evidenced by the rise in fertility rates over the 2006-2011 period. Areas such as Strathmore, Aberfeldie and to a lesser extent Essendon, are attractive to mature families seeking period family homes in areas with good access to public schools and transport. Keilor East and Avondale Heights have also attracted families, at the same time losing large numbers of young adults (children leaving home) who are establishing households to the north and west of Moonee Valley.

This variety of function and role of the small areas in the City of Moonee Valley means that population outcomes differ significantly across the municipality. There are also significant differences in the supply of residential property within the City which will also have a major influence in structuring different population and household futures over the next five to twenty years. The major source of additional dwellings and households in the short term will be in major redevelopment sites, in particular the redevelopment of the former Niddrie Quarry in Keilor East and the Orica Site in Ascot Vale, bith of which are reaching their final stages. Within the east of the City, there has been significant ’brownfield’ development along arterial roads and, particularly the conversion of older retail and indiustrial sites along Mt Alexander Road and car-yards along Keilor Road. Significant redevelopment has occurred with Moonee Ponds activity centre, with the current redevelopment of the former market site, and a significant number of high density projects elsewhere within the town centre, In the longer term, development in centres such as Moonee Ponds and infill development will dominate in terms of providing new dwellings. Other future significant opportunities are the proposed to redevelopments of the public housing estates with Flemington and Ascot Vale, and the Moonee Valley Racecourse, all of which will provide significant sources of development supply. Finally, the proposed grade seperation at Essendon Station is likely to provide further opportunity for residential development.

Powered by .id - the population experts for City of Moonee Valley