Mitchell Shire is located in central Victoria between 35 and 100 kilometres north of Melbourne. The Shire comprises townships at Seymour, Kilmore, Wallan and Broadford, as well as extensive rural areas. Much of the rural areas are used for agricultural purposes though some parts, especially around the towns, are becoming more popular for rural residential living.

Early development in the Shire dates from the mid 19th century when towns such as Kilmore and Seymour were established as rural service centres. Though gold was discovered in the region, early growth was influenced by the location of these towns on transport routes out of Melbourne to goldfields around Bendigo, and further afield to Sydney. The construction of the railway line between Melbourne and Sydney in the 1870s, as well as the development of the agricultural industry, were other important factors in the early growth of the region and the establishment of towns. The establishment of the Puckapunyal Army Base near Seymour in the early 20th century consolidated the role of this town as a regional service centre.

Population growth in the Shire was steady over the 20th century but in more recent decades the influence of Melbourne in the southern part of the Shire has become increasingly evident. Towns such as Wallan are about 40km of the Melbourne CBD and with improving transportation links, its role and function has changed from a small rural town to an area providing housing for young families seeking affordable accommodation with good access to the Melbourne job market. This influence continues to grow and is evidenced by two main factors; i)the decline of traditional agricultural industries and the growth of rural residential areas and hobby farms, and ii) the designation of large tracts of land around Beveridge and Wallan as future urban. In contrast, the northern part of the Shire, centred around Seymour, has recorded population decline in recent years associated with out-migration and lower levels of demand for new housing. This area lies outside Melbourne’s economic catchment as evidenced by lower levels of commuting to the capital city, and hence doesn’t have the same role and function as southern parts of the Shire.

Traditionally, the towns in Mitchell Shire have provided housing and employment opportunities for families and had strong links to the surrounding agricultural area. In more recent years, especially with improving transport links and the decline of traditional rural based industries, in-migration of families and prospective families into the Shire from Melbourne’s northern suburbs in particular has increased considerably. This role is expected to continue into the future as large tracts of land in Beveridge and Wallan have been identified as future urban areas, in line with Melbourne’s outward expansion.
Historical migration flows, Mitchell Shire, 2011-2016 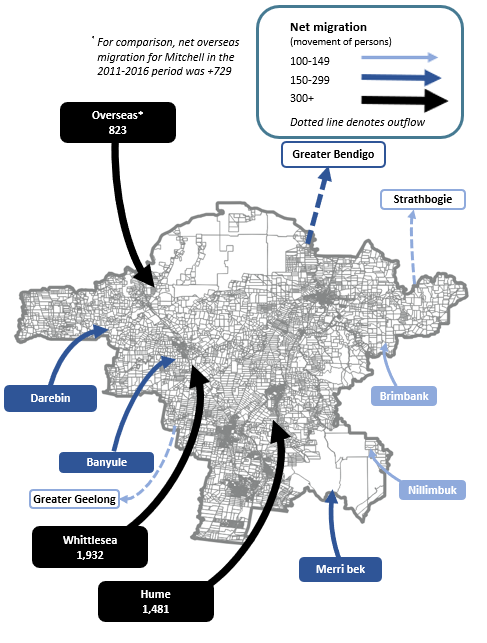 The dichotomy between the northern and southern parts of the Shire, as well as the settlement pattern comprising towns and rural areas, means that housing market roles differ widely. Areas in the south of the Shire around Wallan and (especially in the future) Beveridge, are attractive to young families and others seeking relatively affordable housing in a greenfield setting. Kilmore and, to a lesser extent, Broadford will also see growth resulting from in migration of families and some tree changers/amenity migrants, but they also tend to lose young adults, typically to Melbourne, for employment and education purposes. This trend is somewhat evident in Seymour, though this growth in this town is not expected to be large due to lower levels of demand for new housing.

The differences in role and function as well as supply of residential land and demand for new housing mean that housing and population outcomes differ signficantly across the Shire. It is assumed that the majority of new dwellings will be constructed in Beveridge and Wallan on land designated as future urban areas. Kilmore-Kilmore East and Broadford are also expected to record modest growth. In contrast, lower levels of new housing are assumed in Seymour, Wandong - Heathcote Junction, and the rural areas of the Shire.