The role and function of the City of Melbourne has almost turned full circle from its origins as a predominantly residential and commercial area, through a period of depopulation as industry moved in and residents sought housing in suburban areas, to its current situation, where significant population increase is occurring through redevelopment of former employment-related uses, such as warehouses, industrial land, office space, wharves and railway land. Employment uses remain a key component of the City, but a greater share of jobs are office-based. However, the Port of Melbourne remains a key transport and employment hub.

The extent of redevelopment proposed over the next twenty-five years will see the City reach record levels and make it one of the largest Local Government Areas in terms of population in Victoria. This is expected to occur through massive numbers of new dwellings being constructed, although the average numbers of persons occupying each dwelling will remain at about two persons per dwelling.

The massive growth in population is a result of the attraction of the inner suburbs of Melbourne for tertiary education, employment opportunities and the ’bright lights’, which results in much of the population migrating to the City being young adults in their late teens and twenties. The greatest share of these migrants come from overseas. However, the City is also the focus for people migrating from other parts of Australia and regional Victoria. A large proportion of these migrants are comprised of tertiary students studying at places such as Melbourne University, RMIT and other educational institutions in the inner area of Melbourne. The City also attracts a large number of permanent overseas migrants in their twenties and thirties, many of whom are young professionals. The City of Melbourne also loses people to a number of inner and middle suburbs, in particular the inner northern and inner western suburbs. Many of these people are moving further out to find affordable housing when the time comes for purchasing. They may be seeking larger dwellings and yards when reaching their child-rearing stage and looking to get greater housing space and better value for their housing dollar. 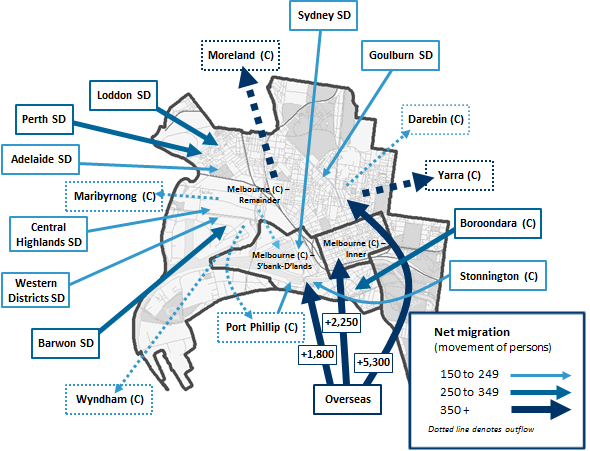 The City of Melbourne plays a unique housing role in the metropolitan context. Its main role is to house young students and urban professionals, the bulk of whom are childless. This role has augmented over time as the importance of the tertiary student market has grown in the Victorian economy. The overwhelming share of housing that has been constructed in the past couple of decades has been high density, smaller one and two bedroom apartments, many of which have been sold to investors. As of 2016, almost two-thirds of households in the City of Melbourne were renters.

There is significant potential volatility in the housing market in the City of Melbourne over the next fifteen to twenty-five years due to its dependence on a number of factors. These include:

There is a strong demand for dwellings across the City, but there are significant differences in the supply of residential potential within the City which will have a major influence in structuring different population and household futures over the next five to twenty-five years. Melbourne CBD is expected to have the largest amount of development with the construction of just under 39,000 dwellings during the forecast period (2016-2041). Other areas such as Southbank, Docklands and Carlton are also expected to experience large amounts of development. The construction of the underground Melbourne Metro rail tunnel is also expected to result in significantly increased levels of development in the North Melbourne-Kensington area, while the West Melbourne Waterfront, E-Gate and Dynon Urban Renewal Precincts in West Melbourne and the Fishermans Bend project in Port Melbourne are also expected to provide significant numbers of new dwellings.

Small areas such as Parkville, East Melbourne, South Yarra and Melbourne (Remainder) are expected to have lower levels of development, but there is still expected to be significant demand for these areas.

The built form that is expected with these developments is likely to shape the population. The majority of new dwellings that are expected to be built over the 2016-2041 period are high-density apartments, many of which are relatively small in nature (one and two bedroom). The apartment market has been dominated by young singles, couples and students. Some areas, such as Docklands, East Melbourne, Southbank and Parkville, are also expected to attract some older households.

Another key component of housing supply over the next 20-25 years is increasing amounts of purpose-built student housing (non-private dwelling accommodation). These insitutional forms of housing are especially important in the northern part of the City around Melbourne University and RMIT. Substantial increases in population through student housing are expected in Carlton (+6,660 persons), Melbourne (CBD) (+8,290 persons), North Melbourne (3,100) and Parkville (+1,680 persons).

Powered by .id (informed decisions) for City of Melbourne